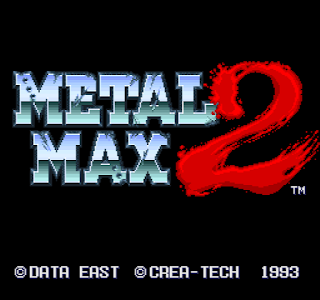 Finally I’m back to Super Famicom games. This game is a sequel to the 1991 Famicom game Metal Max. It’s the second game in a series that continues to be made today (with the next game apparently coming out this year). Only one game (Metal Saga) has been localized in the US. There’s a translation patch for the 1995 remake of the first game but as of yet nothing for this. (This game was also remade in 2011 for the DS as Metal Max 2 Reloaded.)


It’s classified as an “open world” game. This label tends to be rather vague, but in this case it means that you have a greater degree of freedom and many of the events and places are optional. It doesn’t go as far as Romancing SaGa in trying to let the player explore the whole world right from the start — this carries the risk of the game being close to a traditional linear RPG, just without much direction. MM2 does seem to mostly get it right from what I’ve played so far; there is a sense of forward progression and there are enough hints that you can identify places to go next.


One drawback of this (for me) is that there are sometimes places where you’re not sure if you’re supposed to be doing a certain puzzle or event now, or whether you’ll have to come back later. Of course since most of the stuff is optional you can just skip it, but I often find it hard to resist looking at a walkthrough. I think I used a guide too much when I played this week, but I’m psychologically weak against the fear that I might have missed something.


As you might guess from the name, the setting is inspired by Mad Max. The exact setting is non-specific; there are a lot of trees and other greenery so it’s not bleak post-apocalyptic, but society has definitely collapsed with a lot of ruined cities and such. The Grapplers are a large force of thugs who control much of the world and hunt humans. The main character is the adopted son of Maria, a Hunter, who hunts monsters for money. Maria found him on a battlefield where his parents had been killed by Grapplers.

The game begins with the townsfolk of Mado hiring a group of Hunters, including Maria to protect their town from Grapplers.

They handle the first group easily, but then the leader Ted Bruiser appears.

Ted slaughters everyone, although Kurisu (our main character) manages to survive. His goal now becomes to make money and perhaps beat the Grapplers some day.


The first task is to get a tank. You can fight in this game either in a tank or on foot. Some places can’t be reached by tank so you have to go on foot, but you need a lot of money to equip and outfit the characters and their vehicles. So Kurisu sets out for El Nino, where the Mado mechanic has gone.

The battle system at this point is fairly simple. There’s no magic so you can attack or use items. Fortunately getting a game over is fine — you reappear at Mado with no penalty. The crazy mad scientist Dr. Minch will revive anyone for free (to further his experiments). Once you get vehicles it becomes more costly because you’ll have to recover the vehicles from wherever you died and pay for their repairs. Mado essentially becomes the base, where you can rest for free, store items, clean your tanks, and do other things of that nature.

At El Nino, Kurisu hears that the mechanic has gone back to Mado. You can activate a teleport system to return there, and then get the first vehicle, a Buggy. I failed to get a screenshot this time, but the vehicle system is pretty detailed. Each unit has a chassis, engine, weapons, and items. You have to keep the vehicle’s weight below a certain amount so you can’t set everything up. Generally you have three types of weapons — small damage unlimited ammo, medium damage limited ammo, and high damage very limited ammo. The armoring comes through “tiles” which act as HP for the vehicle (called SP). If all the SP go away then the attacks start damaging the parts of the vehicle, which have to be specially repaired. You can freely mount and dismount so if the vehicle is taking too much damage it can be sidelined.

One annoying part is that you frequently are forced to dismount the vehicles in towns or outside to pass through certain areas. The vehicles remain there forever until you remount them. So you have to remember where you left them (even if you die).

Now with a vehicle I could take on the first Wanted monster. A main goal of the game is to defeat the monsters seen on wanted posters around the world and get the money rewards for them. The first one is a sand shark.

That screenshot is from a failed attempt where I didn’t have any armor on the vehicle. Once I did it wasn’t too bad, and I got 1000 gp out of it.

The next goal is to get the first companion. There are three companions in the game — a mechanic, a soldier (female), and a dog. The mechanic is trapped in El Nino, but we can release him by finding Ginba in an underground sewer near Hatoba town. Unfortunately the bridge has been closed because of Mado’s foolish uprising against the Grapplers, but Kurisu blasts the guards to smithereens, who then escape on Ted Bruiser’s ship.

The sewer is not very long, and once we find Ginba he’s willing to spring the mechanic Robin from prison, who then joins our team.

Next up is Pochi, the dog, who can be found in a dog village. There are other dogs that can join you as well but they can’t equip anything so you have to ditch them at Mado town.

The next place I came to was Azusa, where people are gathering to oppose the Grapplers. Reaching the top of a tower (and guessing the password), everyone recognizes Kurisu because Maria had been here with him before. Maria seems to have been highly respected by these people. They also tell you about secret weapons in Thirsty Bar, where I went next.

By using a similar password I was able to gain access to the secret shops and weapons at Thirsty Bar. I also found out from a walkthrough (sorry!) that by using a mine detector in the nearby desert you can get the second tank. After all of this I was ready to take on another wanted monster, Adam Ant (sigh) near an abandoned forestry compound.

The ants in the anthole were fairly easy and gave a lot of XP and gold, especially the Gold Ants. Adam Ant had enslaved a bunch of people but in the end wasn’t that hard (although he did kill Kurisu).

Now with the money from the anthole plus the 4000 g from the reward, I have lots of money. First up will be to try to do some upgrades on the tanks.

So far this is a pretty decent game. I’m almost surprised to be enjoying something!