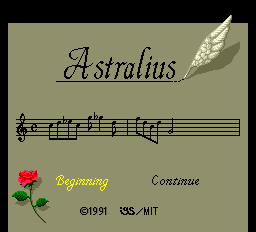 I’m noticing a stark contrast between PCE games that really tried to use the CD technology and those that didn’t. Tengai Makyo, Ys I&II, and Cosmic Fantasy have a lot of voiced scenes and cutscenes, and Ys uses the CD for great music. Deathbringer, La Valeur, and this game could have come out on HuCards. I think Astralius has some CD music but it’s not that great. I assume these games were brought out on the CD because it’s cheaper than a HuCard and maybe they thought it would increase sales because of the new technology.

I’ve been looking at a Japanese blog that has posts on old PCE games, and his comments on this game perfectly sum up my own thoughts:

This is an innovative-seeming RPG with music as its theme. Young people who want to be professional musicians adventure in the alternate world Astralius. Fighting with “performances” and other places where they tried to be different from other games are good, but there are a lot of weak points in the game, and the content is bland and quickly induces boredom. The battle system, the selling point of the game, is bad, with a completely black background. The encounter rate is high and you can die from one critical hit of the enemy. Even though the theme of the game is music, the sound effects are horrible. It’s on a CD-ROM2 so you would expect more events using visual scenes to heighten the mood, but there are basically none.

So let’s see how the game progresses. 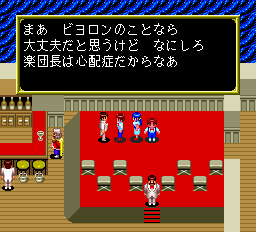 You begin by naming the four members of your orchestra — a flautist, a trumpet player, a percussionist, and a violinist. You then start on a ship apparently in the present day Earth, with an adventure-game like section where you have to solve a few puzzles to find the violinist. We then scare away a bad guy Ludbach who is harassing a woman. He drops a musical score, which the group decides for some reason to play. 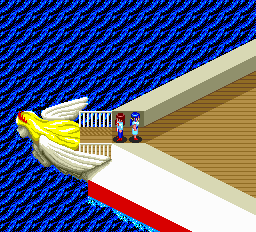 This score warps them into another world, Astralius. The flautist finds himself alone in a palace of fairies. He is able to transform into a knight via a robot-like creature, and the trumpet player soon joins with the same ability. 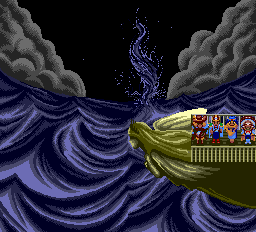 Magic is learned through levelling up, but you have to pay to increase your MP by “tuning” your instrument. The cost increases as you level up but this is a major source of money drain at the beginning of the game. We also learn in the first town of a tower up north where our other companions went but did not return. So that seems like the first destination. 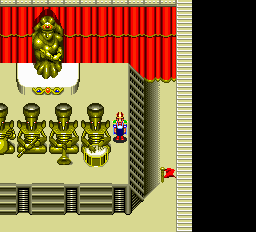 As soon as you leave the first town the CD music suddenly changes to ear-splitting 8 bit junk. The random encounters come fast. As the Japanese commenter said above, the battle system is a standard RPG but the presentation is strange. It first shows you the enemies and your guys, but then for your move selection it switches to this screen: 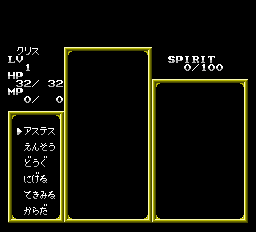 I don’t know what purpose that blank box in the middle serves, and I don’t see why they thought they had to have these two separate views. Once you enter commands it returns to the monster/player view although only the current target or attacker is visible so it’s a little annoying to see how many monsters are left. You can hold down the I button to go through the messages, which is nice. 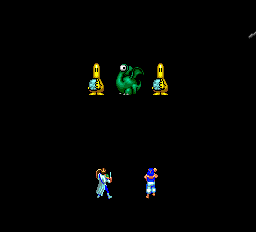 Levelling is fairly quick with the I button and a speedup key but the random encounter rate is so high that it took forever to actually be able to make it to the tower. 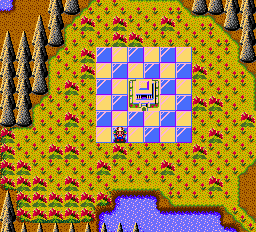 For some reason the tower uses the overworld graphics engine instead of the town one. Here, as well, the encounter rate is off the charts, and it took a while before I had enough power to make it to the top, where an orb transports us to a desert area. 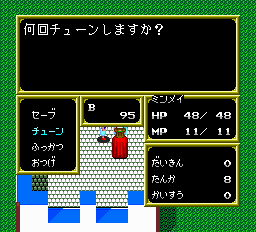 That’s where I’m stopping; this is a poor early-era RPG that has some interesting ideas but isn’t really worth playing. 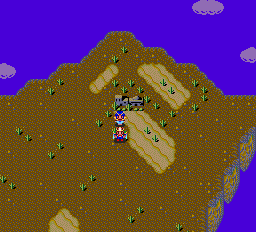