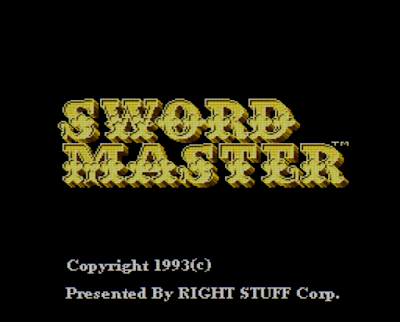 This is the final game of 1993 and the final game on the PC Engine (check out my other blog for lots more PC Engine games, through 1996, but none of them are SRPGs.) It is almost totally unknown in the West and doesn’t have much presence in Japan either. There is a playthrough on youtube and a few blog posts about it, but no walkthrough sites.

The first thing I want to point out is the package; the back of the CD case just has a collage of combat scenes, which aren’t that impressive, and no text at all. It gives no indication of what kind of game it is or what it’s about at all.

According to the instruction manual, a great power once destroyed the world. Our main character, Aksu, has been born with a cursed destiny, and wanders the world by himself. He sees dreams that indicate he is the son of this great power. He has access to some sort of power but sealed it away.

Here is a video of the game up to the end of the second battle:

The game begins with a cinematic opening and a vocal song. Aksu then reaches a small town, where he comes across a girl stumbling into the bar; her village has been destroyed and the chief kidnapped. Aksu decides to escort her back. Along the way he meets some Orcs. 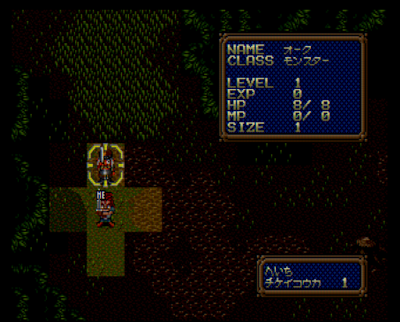 The battle system is pretty typical, although I believe this is the first game I’ve played that lets you move and attack in any order, with all your guys. That is, you can move a few people, attack with one of them, then move another, etc.

I noticed here that there is no money in the game. I still have not gotten any drops from monsters yet which means that everything you get is decided at specific points in the game?

The battle sequences are standard: 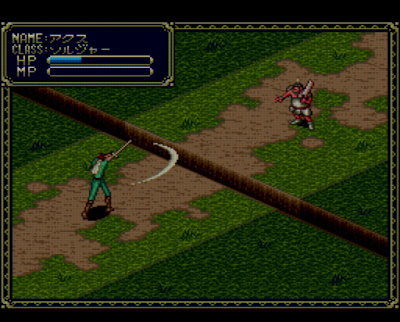 One annoyance is that sometimes people will get multiple strikes, and the enemies sometimes go before your character. The damage also can vary widely; I’ve seen 11 damage which on a reload was 1 damage. You can save any time, but there is only one save file. Aksu has the “Return” spell which works like Shining Force, so as long as he hasn’t moved yet it’s safe to save unless you’re in a battle that doesn’t allow Return (which the instruction manual mentions).

After the battle, Aksu refuses to spare the Orcs’ lives: 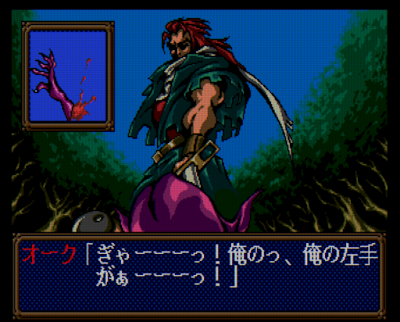 Aksu goes to see King Dalk VIII, who tells him that Balgas, an evil being, seems to have been reborn. Aksu takes immediate interest in that and decides to go take him out. The King gives him two companions — Ganesha the warrior, Belzes the knight, and Sesca the priest.

But before that, the King tests Aksu’s ability by having him fight some guards, which are no harder than the Orcs.

Before this battle there’s a cutscene where Balgas reawakens, and his four Shitenno minions agree to carry out his will.

Here is a video of the third battle:

After that battle Aksu and the party head on to the next town, Premia. Although you can explore the towns, the game is (so far) linear in that once you leave a town and clear the next battle, you can’t go back. Your progress follows a map: 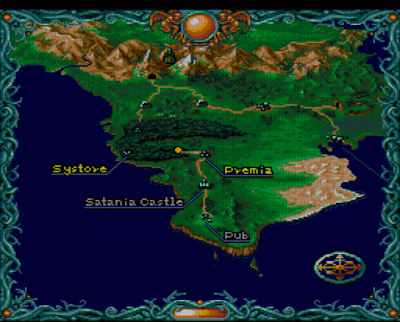 This battle is pretty tough because the first of the Shittenno is there. His 32 HP are difficult to deal with, since he can attack 3 times in a round — I retreated the first time but the second time I won with reloading. Hope for misses!

You get medical herbs before the battle. These get equipped on a character, and when they reach 0 HP, the herb will automatically be used to restore to full HP. Since there are a limited number of these and no money or stores to buy new ones, I’m trying to avoid using them — I will let them get used on a boss battle or something like that, but if a random orc happens to do more damage than a character’s max HP (which has happened a few times) I’ll just reload.

The townspeople complain about monsters, and the chief tells us that without the God Weapon we won’t be able to seal Balgas — maybe the Meifu Tribe in Systore Village knows where it is. The chief doesn’t think they’ll talk to Aksu, but Aksu seems to know more about this Meifu tribe than the chief does…

Heading out to Systore there’s a battle, but it’s an easy one vs. grunt Orcs and Lizardmen. 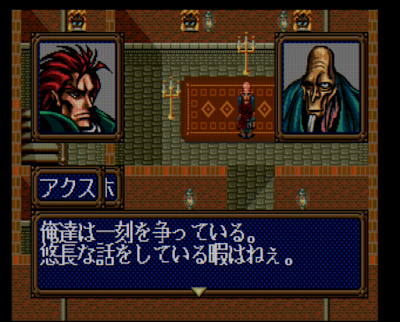 Unfortunately Systore is deserted. Aksu eventually finds Aselia and some children hiding, who tell him that the chieftan, Tis Ris, knows where the God Weapons are — but he has been captured. So off to Dark Castle to try to recover him. On the way, there’s another grunt battle. It has some slight challenge because you start off surrounded, but the enemies themselves are the same as before.

Aksu and his party reach Quarg, an elf village. The townspeople complain about Balgas, and the chieftan tells us that they sent a party to a nearby cave that connects to Dark Castle, trying to recover Tis Ris, but there was one of the Shittenno there waiting for them. Two elves join our party and we’re off to the cave. But on the way another fight with random monsters — there are new monsters (Gargoyles) here that can move far. 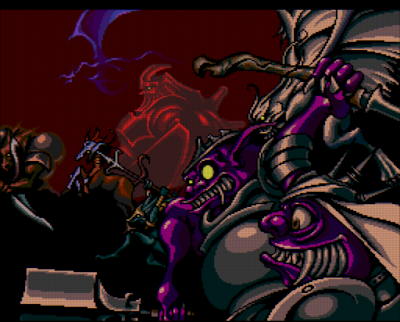 Several people levelled up to 5 and gained no stats no matter how many times I reloaded…that’s odd.