The general purpose of this blog is to play games that weren’t released in English. However, the secondary purpose is for me to have fun, so I will be playing some games that were released in English that I never played when they came out. Other than this, I will at least be playing the two Breath of Fire games, Super Mario RPG, and Lufia II. It’s also possible that I will replay a few classics that I have not played in over 20 years since they first came out — Secret of Mana and Final Fantasy VI, for instance. But I’ll decide on a case-by-case basis.

This is a real-time strategy SRPG. It does qualify as an SRPG in my criteria — it has a narrative rather than just a goal, and individual named characters that can be developed.

Normally when I play an SRPG I use walkthroughs for factual information like how to get a good ending or optional characters, but I try to figure out the strategies myself. That’s what I’ll do here; I’m going for the best “World” ending.

There’s nothing much to say about this stage since it’s just a tutorial for moving; Warren and Lancelot join your party. I answered the initial questions honestly and ended up with (I think) the Iainuki Lord, who has a strong attack from the back row that hurts her as well. 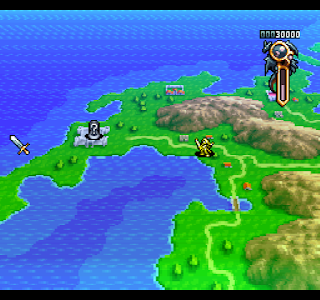 This is the first actual stage. You have squads of up to 5 characters, although large units like dragons take up 2 spaces. The units have different attacks based on whether they are in the front or back row. Each unit has a leader, and if the leader is killed then the unit has to run back to the home base and leave the stage. When a battle happens, the squads don’t fight to the death, but only until each unit does a certain number of attacks. Then whoever did more damage is the winner, and the loser gets pushed back.

The goal usually is to liberate as many cities and temples as you can, and then defeat the boss. There are hidden items and towns on the stage — here one of them gives you an item (the Twinkle Star) that is apparently necessary for the best ending.

There are two things I find disappointing about the strategic elements of this game. The first is that the enemies all tend to just gang rush you, meaning that a lot of the time you just have to sit and wait for them to come until they’re all gone, then you can actually move around the stage liberating the various towns and things. The second is that if the leader is killed, the enemy will flee back to the base and then immediately return with a new leader. This means that a lot of your strategy has to be exterminating the squads rather than just killing their leader, unless you want to be killing the same squad over and over again.

This stage has two additional optional characters, Canopus and Gilbert. Canopus just requires going to several different towns on the map, but for Gilbert (who is the boss of the stage) you have to forgive him. Also, your Chaos Frame has to be high enough. The CF (called “Reputation” in the English version) is an important value that’s shown on a meter — it affects things like secret characters and your ending. Keeping it high mostly involves using high alignment units to liberate towns, and avoiding “incorrect” answers to questions and such throughout the game.

This stage has the first undead enemies. These guys are annoying because they can’t be hurt except by a Cleric or similar class. The Cleric has to use healing on them to instantly kill them, although it can miss. Fortunately it hits all the undead with each single healing spell. 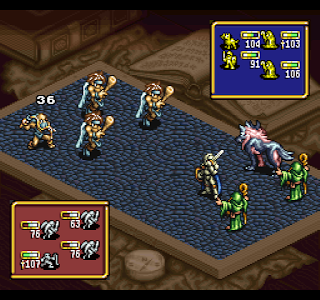 This stage has a werewolf, but as long as you go fight him during the day he’s not very hard. 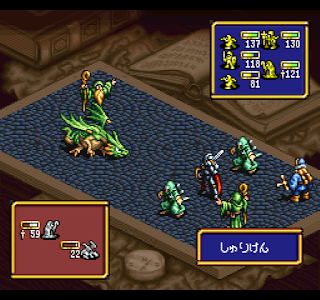 Deneb has been in all the Ogre Battle games, I think. Here she’s the boss, and to be able to recruit her you have to forgive her, taking a Chaos Frame hit. I decided not to do so, even though it’s fairly easy to recover CF over the medium term. I just figured I would play it goody-two-shoes all the way.

This is the longest stage so far. The boss is protected by big walls that block all non-flying units. Making flying units in this game is not as hard as in some other games I’ve played because a single flying unit makes the entire squad flying. So at this point most of my squads have the flying unit — they can move faster and cut off retreating units, as well as ones that have lost their leader.

There’s an item, “Trojan Horse,” that can break down the walls (changed to TERMITES in the localization…for space reasons, I guess?). But if you do that more ground troops come out. I did it anyway, and this was the hardest boss so far — bosses in general are tougher because they regenerate HP very quickly and can instantly replace killed units in their squad. I had four units beating up on him and made sure to use the “spread attacks around” AI to avoid killing them.

I do have to say that I’ve found all of the AI options useful at various points in the stages, which is good.

Another area that’s lacking so far is the story; there is some, but a lot of it is just “here’s the next place to liberate.”