This game has two issues that make it considerably less fun than it could otherwise be. The first is the encounter rate, which may be the highest I’ve seen in any game to this point. In some dungeons you get encounters every 2-3 steps. The second problem is that once again, designers have decided to make it a game over if the main character’s HP ever get to 0. Since there are monsters that use instant death spells and do critical hits and spells that do more than your max HP, this means that at least a few times during the game you’re going to get a game over just by pure luck. It’s not as bad as some games since “game over” sends you back to your last hospital with some money subtracted. But it’s still frustrating, and there are some bosses that require luck to beat just to avoid this instant game over.

With that said, let’s see how the rest of the game goes.

In the last post I had gotten 4 of the 7 items necessary to revive Atimos, and headed north. There’s a railroad on this continent that you can ride to various destinations. At the top of the land is the railroad office, which accepts donations to finish the rail line. Instead I just went to the airport and flew to The City, a big place at the NW of the map.

The City is where Thomas is from, and we need to help him take on his nemesis Dr. Pochi, who has built a mech and is hiding under the city. Mio’s father is also here, but he doesn’t say much. This quest doesn’t have anything to do with the overall story but you have to do it to be able to leave The City and go to the next area. This is also where I found the random encounter rate to get really frustrating. The sewers here have encounters about every 1-4 steps. From here on out my basic strategy was to fight battles until Sasuke has enough speed to go first in every fight, and then run from everything (running is 100% effective).

Finally I found Dr. Pochi and his mech under the city, and since I was so overlevelled from all the encounters he went down easily. Like most of the villains in this game he apologizes and he and Thomas clear up their misunderstanding. Apparently Pochi thought that Thomas had stolen his robot but he was just trying to help, or something.

Now in the Zoo (yes, there’s a zoo, with talking animals), we meet a whale who tells us about the trouble the penguin land is having. The Emperor and King Penguin are fighting a war against each other. Since the 5th magic item is there, I’m happy to accept the whale’s offer to take me there.

In the icy kingdom, we meet the penguin magician Marin, who says that the Emperor and King Penguin each think the other stole his crown, and that’s why they’re fighting. Kabura, the keeper of the Atimos item, has been imprisoned and we’ll have to end the war to free him.

At this point I just couldn’t take the encounter rate and used a walkthrough — there are two mines with enemies, and the Emperor’s town and castle also have encounters. Basically what’s going on is that two members of the Uruuru group have stolen the crowns themselves and blamed the penguins. I had to unmask each Uruuru group member, fight them in the mine, and return the crowns. That stops the war and Kabura is able to give us not an item, but a word of control that we can use to control Atimos once he’s been summoned. Unfortunately, the Uruuru group people overhear it.

Now Kabura gets a friend of his, an old man with a reindeer, to take us to the next continent, where the last two items are waiting.

I arrived in a mountainous area, where the Uruuru members were hard at work — they had apparently made a machine to replace the Dream Gem for opening the chests with the Atimos items. Also now if you lose a fight against some of them you also lose one of the items; I’m not sure how you get it back.

The panther Ranba tells us he hid his item in the Mist Tower, which I found to be the most tedious dungeon in the game. It’s a long dungeon, and you’re facing an encounter every 2 or 3 steps. There are also these bone monkeys that have very high speed so you can’t run immediately, and they have annoying MP sapping attacks and a critical hit that killed my main character from full HP. I got a number of game overs on this tower, and had levels in the high 50s by the end.

But, I did find the item eventually, and fought off the Uruuru group who came to try to take it. Now just one left, in the northern desert. There’s a lake in the middle of the desert that has been made by some natural process involving an earthquake, that sank the ancient city of Atimos. There are a lot of little villages around the desert, and after upgrading my equipment and gathering information I was able to get the last item from a turtle — after fighting both Uruuru factions in a row. Fortunately they’re not that hard because Mio’s lighting magic is extremely damaging and she also now has an attack up spell.

Now with all the Atimos items, it’s time to revive Atimos. Sailing out to the center of the lake, I found a little temple jutting up from the bottom. Using one of the items restored the entire city. Now I could go in each small building and use one of the Atimos items, which opened up the way to Atimos himself.

I used the remaining items in the temple, which revived Atimos.

Speaking the word of command, he followed me (sort of like a genie) and fixed the lake so that the water would return to the desert area. But then the leader of the Uruuru group comes in and uses the word of command to take control of Atimos, heading back to their base. Thus comes the last dungeon. First I had to fight the Uruuru group members again, but they’re still not very hard. In the base itself, they helpfully provided chests with most of the strongest weapons and armor in the game. At the top, we have to fight Atimos.

He has two forms. The first is easy, but the second has a quake spell that takes everyone’s HP down to single digits, and a lightning attack that often did over 1000 damage to my main character, which is an instant loss. It took 4 or 5 tries to beat him; I just tried again until I didn’t get killed.

The last fight is against the Uruuru group leader. First his human form. 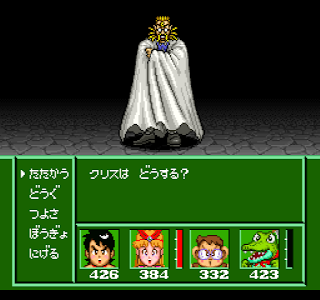 He’s not hard. This is the last chance to heal and save, but I just went on to the last fight, which has two forms. 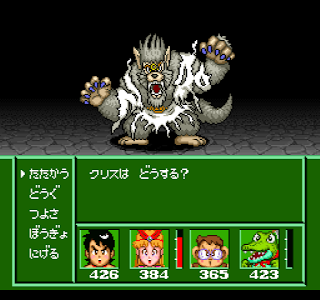 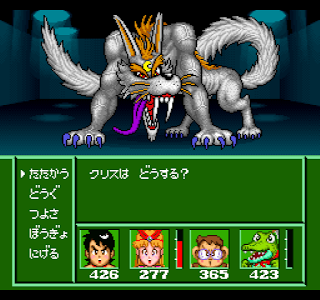 I found both of these easier than Atimos. I just had Mio buff everyone’s attack and then healed when I needed to. He does have an instant death attack but it failed every time he used it.

Once he’s defeated, like most of the enemies, he apologizes and accepts punishment. Atimos disappears, saying that he will return when strife and war are among the humans again. We lead him back to the jungle, where there’s some backstory — apparently he was friends with Jungle Papa and his wife at one point. I’m not sure whether I could have learned this via a side event. That’s basically the ending, and then you still have control so you can participate in the jungle tournament, or finish the railroad building sidequest or play around with the auction. I should have seen whether different towns have unique dialogue after you beat the game. 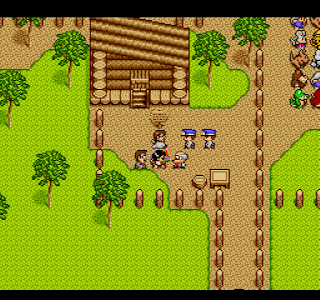 So that’s Jungle Wars 2. I’ll do a review later this week, but this is potentially a good game with a huge flaw in the random encounter rate. It’s still not a bad game, but it’s disappointing.