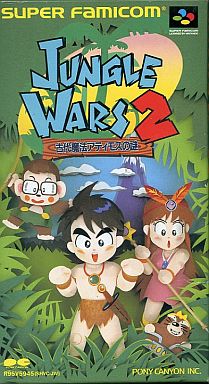 This game is a sequel to Jungle Wars, which came out on Game Boy in 1991. I don’t know if this is an actual story sequel but it seems to have many of the same characters as the first game. The “Jungle” of the title is really more of a reference to Tarzan or Jungle Book-like media than anything else; the game takes place across an entire world. But it’s a world full of talking animals who make towns. 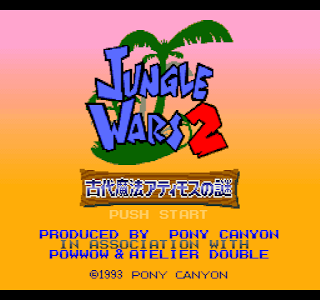 Pictured on the box above are the three main characters. The main guy, Jungle Boy (who you give a name to) is the son of Jungle Papa, a sort of Tarzan like figure who patrols the jungle. The girl is Mio, a magic user. Sasuke, the monkey, can use various fruits in battle to cause effects, or can do random things. The fourth character in your party switches in and out during the game.

The game starts with the classic “mom wakes up the hero” Dragon Quest III reference. Kurisu’s father, Jungle Papa, is now the president of the new railroad company, and leaves Kurisu in charge of patrolling the forest. He suggests a visit to the western area to look for suspicious activity. 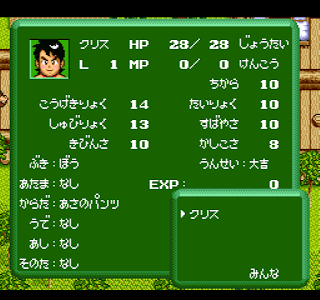 As Kurisu walks around there are enemy encounters — the battles are standard attack/item/defend, although you quickly get Sasuke who is able to find fruits and nuts to use in battle for various effects. When you defeat enemies, rather than killing them, they are “chastised”, apologize, and run away. Some enemies just get knocked out. 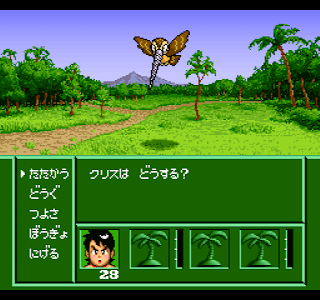 The western area turns out to have a rat syndicate called the Uruuru Group, who are about to kill Kurisu when an earthquake ruins the area. Returning home, Kurisu discovers that Jungle Papa was buried by the quake — time to save him. 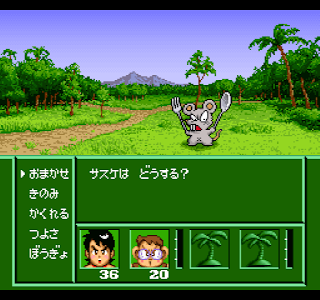 Along the way we pick up Mio, who needs to re-learn the magic she forgot, including a frost spell which will burn up the fire around her village. She wants Kurisu to help her find the Snake King to return rain to the area. Fortunately Mio actually has enough MP to make regular magic use worthwhile, and since some of Sasuke’s fruits heal, it’s not necessary to save all her spells for healing. 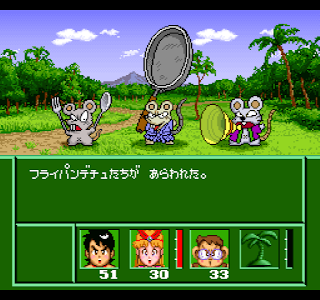 We come across Kurisu’s dad in a cave; during his work on the railroad he found a tablet that talks about the ancient magic of Atimos. It can supposedly do all kinds of destructive or helpful things, and Kurisu needs to find the seven people who are holders of the Atimos secret in order to keep the secrets away from the enemies. Thus the name of the game. At this point we don’t really know who or where they are, though. 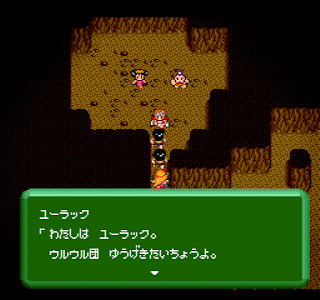 So for now I continued on to Mio’s home, where we were able to use her magic to help the village out, and also save the Snake King, who is just in a cave. Once both of these are accomplished I continued to the next island, where a mouse named D’Artagnan lived. Fortunately D’Artagnan was able to tell me all about the 7 magic holders. It turned out I had already encountered one and found the first of the seven items — a dream gem in a waterfall near his town. 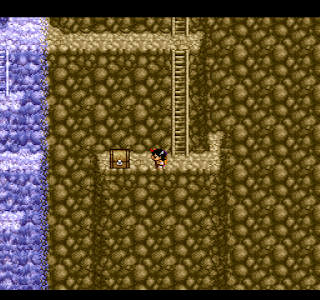 And with the dream gem, we can open a treasure chest that contains the second item. That’s 2/7!

The third turned out to be in the Sun Tower, along with a bunch of other treasures.

After that I met up with Leon, who joined my party, wanting to compete in a tournament. I took time out to try that but lost to Leon himself. There’s also an auction I can participate in but I skipped that for now. Leon is a werewolf at night, and has different attacks then. 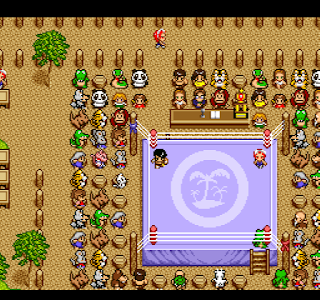 After the tournament I found a boat which I could just board and start going. Along the way there was a guy in a cave who wanted to take me on solo. I tried it but couldn’t beat him, but when I loaded my save and went back to the boat everyone else was gone — I don’t know if this is a glitch or not, but when I went down a nearby waterfall in the boat I washed up at a different town and now the dialogue acknowledged that everyone had disappeared. This seems like a bug but the boss is difficult enough that it’s hard to believe the designers assumed you would beat him. In any case he’s optional so I just went on. I quickly found Mio and took on a new fourth character, Thomas, who uses mecha.

I also found the fourth magic person, who told me the next item was in the Moon Tower. I faced a boss at the top. 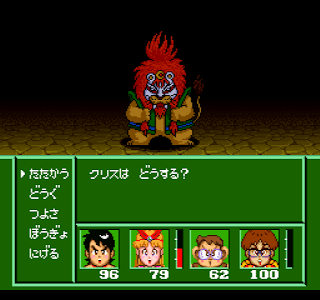 After beating him, I had the 4th item. Only three more!

The other three are a shark in the “shark village”, a penguin in the ice country (which I assume is at the bottom right of the map) and a panther in the high mountains. I don’t exactly know where any of these people are but I’m going to head north from the moon tower and see what I can find.

So far this is an enjoyable game. It has a nice auto battle, it plays fairly quickly, has nice enemy designs, and the world is fun. We’ll see if it keeps up the quality throughout the game.