One interesting side note about this game is how many of the spells later show up in the early Tales games — Tractor Beam, Thunder Blade, Explosion, First Aid, Nurse, Resurrection, and a bunch of others.

Now we’re exploring the depths of the castle to find the King’s Sword. This is a pretty annoying stage; a big maze. 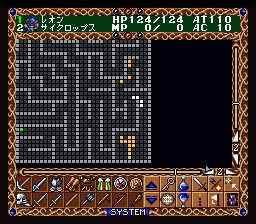 This stage gives me the 6th party so now I have 24 total characters. They tend to get stuck if they’re all trying to move at the same time through a narrow area like this. I did some splitting up here because you have to flip switches at various places around the maze to open doors, ending with the switch at the bottom left which reveals the stairs.

The instruction manual warns you to keep your party’s levels even, and stages like this are why. You have to flip 6 switches, but this requires taking each party on a warp and fighting some enemies. So if each of your parties can’t deal with the enemies you’re in trouble. 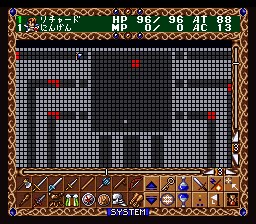 Afterwards, there’s a boss mummy who has to be beaten twice. The second time was harder, and I had to reload a bunch of times before I finally beat it without getting hurt.

Now Richard has the Sword of Kings, and we venture out beyond the castle.

The next few stages are outdoors as we head for another tower. This stage is fairly simple, the main gimmick is a set of bridges you have to break to cross the river, and there are mines to hurt your characters. There are also a lot of promotion items.

Apparently this stage was so simple I forgot to get a screenshot.

This stage has us breaking down a bunch of spear barriers with the mattock, and fighting catapults. 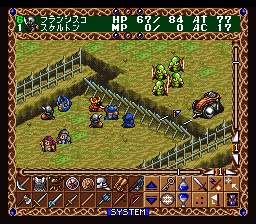 I continued trying to catch up some of my lower leveled characters. Apparently I found out later that there is a secret stage you can access by going to a particular place on the map, but I don’t know what’s in it (it’s labeled stage 24 in the videos I watched so that sounds like there are other secret stages as well).

The last map before the tower, and it’s a tough one. This is the second stage where you really need six good squads. The stage starts with no enemies, but once you step on all six switches at once, enemies come out of the huts. I reloaded many times before I finally accepted one death (I have 15 life potions at this point) and moved on.

One particularly annoying spell the enemies have is Pikohan, which stuns your guys, and they die within seconds when that happens unless you heal them with food. 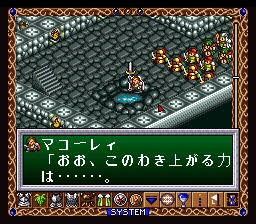 This is another stage where it’s a big help if you have even leveled teams. The slug boss has two versions on different places of the map. If you beat one of them, it will revive after a short time. So you have to beat both of them and then the remaining enemies very close in time, which requires splitting up the team. Pikohan was annoying again, but I’m starting to get it on some of my own units. 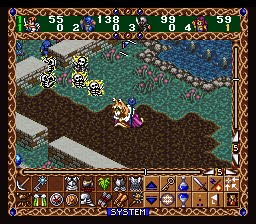 Before this it’s a pretty tedious stage because you have to keep going through warps in small rooms, most of which have nothing in them.

This is a fire based stage, with some damage floors. 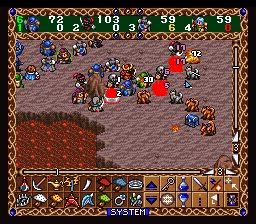 The game gives you a bunch of recovery tiles so this stage is something of a respite, although the end is tricky. The damage floors can be incredibly annoying given the layout of the stage, but I’ll get to that on the next stage.

This ice-based stage has a lot of spiked floors. The end part is especially annoying, and I really think an example of unfair design. 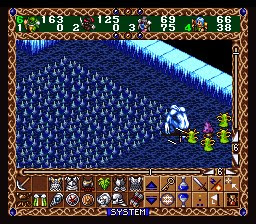 The boss is down there and you come in from the top. It is basically impossible to stop your guys from walking on the damage floors and just sitting there while they fight or cast spells. If you move slowly along the side you can minimize it somewhat, but eventually they’re still going to end up walking on the spikes. I never like it when the challenge is due to interface limitations rather than good design.There’s simply no way to control your characters in enough detail to make this kind of level fair.