Mission 11 – The Heroic Death of Gabalsky

Our goal for this mission is to destroy an enemy Monoroid plant and recover some useful plans. Selder also tells us that we need to immediately kill the thief Vincent if we see him. Keith comes back to fight, but it’s not a hard fight. None of the boss battles are really that hard because if you defend, you recover BP and take almost no damage from hits. So as long as you have healing items and use them frequently, the battles might take a while, but you have to be unlucky to lose anyone.

As the title suggests, Gabaslky is waiting at the end. He won’t say what he saw in the Rachel Lab, but he calls Matthew a demon and wants to end the war at the cost of his own death — he’s hoping to take out Matthew and himself, but it doesn’t work.

Zoro has decided that he wants to destroy Matthew’s spirit in order to weaken the Danzarb squad. Not coincidentally, Orbal has found the place where his mother and sister are being kept. The mission is mostly rescuing various prisoners and receiving keys to open the next area, but finally we reach the place where Matthew’s family is.

Zoro has his men brutally kill Annie and Matthew’s mother, which has the desired effect. Zoro blames Matthew for their death — if he hadn’t fought, and killed a bunch of people himself, his family wouldn’t have died. He doesn’t finish off Danzarb though, wanting Matthew to suffer longer.

Amanda, the leader of the Tattoo Cats, is in a nuclear plant, promising to blow it up if Dick doesn’t come to see her (she’s copying Zoro’s method). The plant is fairly small; we get attacked by various Tattoo Cats along the way but by this time Kim was a high enough level that I could make all the best armor and weapons. This mission, like the last one, has no boss fight. Chiki tries to shoot Amanda but Dick jumps in front of her and dies himself.

Zoro thinks this cinches the victory of Damaya, but Matthew has actually been pumped up by Dick’s heroic death and is ready to move on. (Dick has everyone leave except himself and Amanda — lucky for him Amanda didn’t decide to just blow up the plant anyway after he died. Instead she disbands the Tattoo Cats and goes into hiding.)

Mission 14 – The Secret of Rachel Lab

This is another short mission since we’ve been here before and can go directly down to the 8th floor to the hidden door. When the Earthshaker is on route to the next mission, Vincent damages the craft forcing it to land near the Rachel Lab, and then wants to take Matthew, Sabersky, and Ran Mu down to the lab to see the secret. Gunga Din goes along as well, and it turns out he’s the traitor. He kills Vincent and then we have to fight him 3 vs 1; this could be a tough fight if you’re not prepared. But as usual, the defend/heal strategy works pretty well.

Now we discover the secret. Matthew and Ran Mu (and probably Keith on the Damaya side) are experiments in creating the ultimate soldier, but to awaken the soldiers’ abilities they needed a war. So there really is no Orbal or Damaya, it’s all just Damaya staging this fight on an island. All the combatants are people who wanted to have their memories erased for various reasons (the commander, Sabelsky, accidentally killed a bunch of people with a bomb and wanted to forget). The war won’t end until the ultimate soldiers awaken. (This seems a little silly but it’s a surprising twist I guess.) We also learn in a cutscene after the stage that Seldar is really the leader of the Damaya research team or army.

The final mission, where we have to make it to the Damaya HQ and try to end the war ourselves. Unlike the last two missions this one is quite long, with seven boss fights. I made sure to buy several Fixer 4 units (the most powerful Dragon healing item). Using those immediately was often necessary. The best damage was done by the Blue Dragon since I found a Thunder Blade item that did a lot of damage.

Storywise the main purpose here is to kill off most of the characters (hero and enemy) in a series of boss fights and scenes. First up is Shaman, who attacks the party with a mental attack that it takes Krishna to hold off. 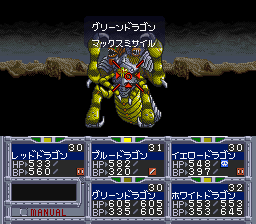 Afterwards, Krishna dies from the strain. So now our best White Dragon pilot is gone. Next up is Zoro. Once we beat him, he tries to get Matthew to come up and land the killing blow, but Chiki realizes it’s a trap and goes herself, dying in the process. Gabriel then dies by blowing himself up to stop some suicide bombers. Jango is waiting here as well. That’s everyone on the enemy side except for Keith, and Seldar. The final dungeon is a few floors; it’s confusing as usual and requires a little puzzle solving to hit a bunch of buttons to make the final room open. Here we first fight Keith. 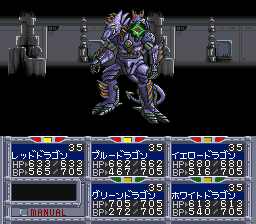 He wants to beat us to prove he’s the real super soldier, but of course we take him out, and tell him that we’re all just humans, not super anything. Now all that’s left is Seldar. He drops another twist; that this whole thing is being broadcast as a reality show that the entire world is watching, in order to raise funding for this project. (If that’s the case, who is developing these super soldiers and why? If you weren’t a citizen of Seldar’s country why would you want to see that?)

Seldar has three forms, but it’s just a long slog that’s not much different than the previous bosses. He can use a move that takes away everyone’s turns, but even so I found it fairly easy to keep healed. 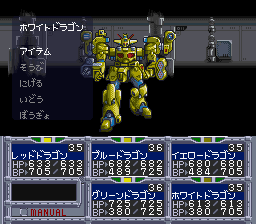 Once we win, it turns out that some of the people who supposedly died still didn’t die, so this is the final survivor group:

But now what do we do? Who wants to go out into a world where people were watching this real war for fun? Matthew hopes that not everyone is like that, but he looks for a camera to give a speech (which I guess is for the player.) 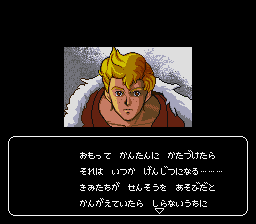 The game closes without credits, just this:

I’m not sure why they didn’t have any title screen, credits, ending screen, or anything of that nature. Just this blank screen with no sound or music.