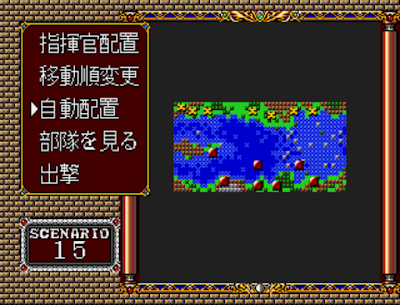 Ugh, I hate these stages where you have to cross rivers because so many of the units and commanders are bad at it. The main difficulty of the stage, besides that, is that dark priestess Lana comes in with reinforcements. I failed the first time I tried it because I was being too aggressive. There are ballistae on the other bank to frustrate you as well.

On my winning run, I kept everyone back except for Lester and the flying units, who cautiously took out the initial water guys. The reinforcements arrive then, and I dealt with them before moving south. Lana was really hard on this run for some reason and I had to use a lot of effort (and help from Scott and his angels) to take her down.

Once she was gone I crossed on the right side, took out the ballistae, and then dealt with Imelda. I never bothered with the enemies on the left. 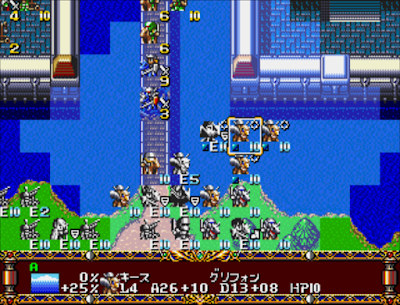 This is Leon’s last stand. The enemies will generally rush you, and if you try to cross the bridge the wizards in the castle Meteo you. I used Hein’s ballistae to take them out, while the rest of my units dealt with the people coming across the bridge. Once everyone is beaten but Lana and Leon, Leon will come down to deal with you himself. I just beat him by ganging up on him with spells and other things, but that means I didn’t beat Lana or get the hidden item. 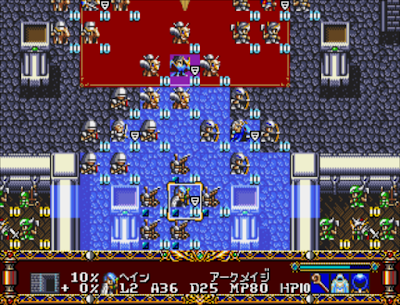 Emperor Bernhardt. I started out by using spells and ballistae to take out the magicians near the start, and then proceeded slowly forward. Once those initial enemies were gone the rest of the stage was not that hard since the other magic users don’t have horrible spells, and Bernhardt and Bozel didn’t seem to do much. I finally got Elwin to his 4th class so now I have Scott, Elwin, and Hein at the 4th level. One thing that bothers me about Langrisser is how hard it is to catch up commanders that are behind, because of how ineffective their units and bonuses are.

Bernhardt himself was easy; you can destroy his throne with a Meteo which gets rid of his 40% bonus. I got the items here; the Masaya Sword gives 2x EXP. I gave it to Jessica because I really want her to get to the 4th class but the stat minuses are going to make it hard.

I had the villagers stay put. I left Arlong behind with pikemen to deal with the reinforcements, but he and Keith together were not able to deal with them so I had to eventually use ballistae as well. Other than that this map wasn’t too bad. I didn’t defeat Lana.

Time to steal a boat. Despite the Meteo casters on the boat itself I didn’t find this stage to be overly difficult. I left Jessica and archers back to try to deal with the reinforcements but even so she didn’t quite make it to the 4th class.

Finally 4th class for Jessica. This ship-to-ship battle is a bit annoying because of space limitations but the monsters themselves are not that hard. I have heal spells now that can deal with Meteor; that and ballistae can usually remove the threat of the Liches while I deal with the other monsters. 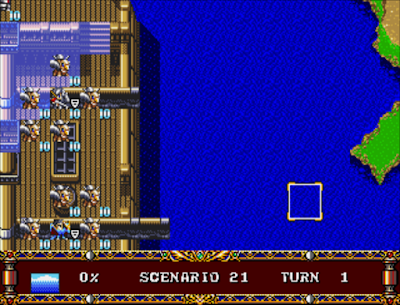 Ooh this is an annoying stage. I hate any stage where you have to move through water because so many units are slow. I switched the Masayan Sword to Arlong since he’s the last person not at their 4th class. This is pretty much the same enemies we’ve been dealing with; the Golems are new but the strong units of Elwin and other 4th class people are powerful enough to take them down.