I’m not a big fan of Madara’s battle system. As I understand it, it’s similar (or exactly the same?) as the one in Madara 1. It’s a real time system where your characters and the enemies run around on a battlefield, reminiscent of Star Ocean. But you have no real options in combat. You can select a target, or use magic or items. You can’t tell a wounded character to run away from the enemies, all you can do is watch them run in to get hit again and hope someone can get a heal spell off. You can’t have a character stay away from the enemies to cast spells. You can’t directly control anyone, or give them any direction. It becomes frustrating because too often you’re watching the characters do dumb stuff and there’s nothing you can do. This may also be why I’ve had to do more grinding in this game than in any game I’ve played up to now except Hokuto no Ken 5. When you give the player strong enemies and virtually no strategic options, grinding is the only way to progress in the game.

Now Kurisu has set out to find Subaru as the chosen hero. After solving the problem in the first area he’s able to pass the barrier to the next kingdom, where there are several towns that have their own problems with the Mouki monsters, and the capital that doesn’t want anything to do with you. 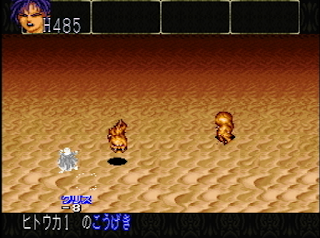 This includes a village who can’t fish because a mouki has taken over the lighthouse, and a mine that can’t mine anything because of Mouki. Both of these problems are fairly easy to solve, and along the way a wounded man named Seishinja joins the party. He can use healing spells. The fishing village allows you to deliver fish to the capital and then get the cook Fuyou to join you; she has also lost her memory. 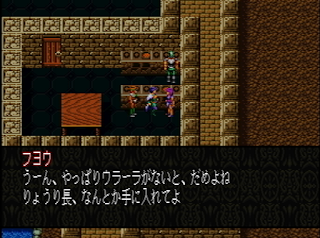 Once Kurisu deals with the mine the guards are willing to let us past so we can talk to the sage Tataru and the king of the land. They want us to find a sword that was taken from the kingdom, and Tataru will try to find Subaru’s whereabouts while we’re gone. Jato (the rabbit enemy) is the one who stole the sword — apparently he is looking for the way to the Yuiman Kingdom, where Sakuya-hime is. 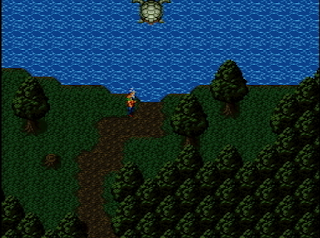 This requires a trip to a village where they take a turtle to an island, and meet some mermaids. After solving the mermaids’ Mouki problem (everyone has one!) they recover the sword and return to the capital.

Tataru tells us that Subaru seems to be in Yuiman, but that he also detects something like Subaru from a tower to the north. So of course we head there and it turns out that her blood is being used to bring back Emperor Dakini, an avatar of Miroku. We beat the priest but the ritual still succeeds, and Dakini seems to come back in a spiritual form, but not complete. This also somehow destroys the entire kingdom, so all the towns and castles are rubble. I guess it’s time to move on to the next kingdom, then. Tataru did make it through, and he suggests that in Roran Kingdom we may be able to get information about Yuiman from another sage. 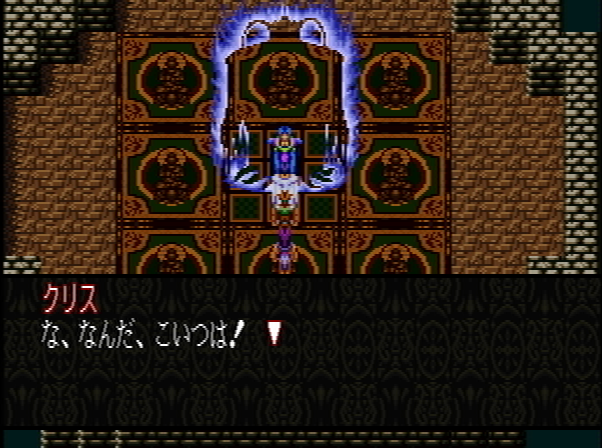 This other sage gives us the usual “mid-game overarching fetch quest” — we have to find 5 stone tablets that will open the way to Yuiman. And we better do it fast because Dakini is building power.

The first tablet is in a cave. A nearby town is having earthquake problems, but beating the nearby Mouki doesn’t help. It turns out that actually it was the tablet’s spirit itself that was causing the earthquakes to alert humans to the danger (huh!?) 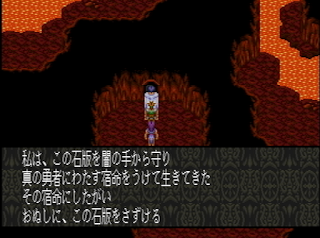 Only a true hero can take the tablet, but that’s Kurisu, of course.

There are three small kingdoms at the south of the continent that are ruled by siblings. The brothers have started wars against each other and Mouki have invaded the sister’s kingdom. But they do have a stone tablet in the mausoleum if all three siblings use their keys to open it — so it’s time to solve the problem here. The sister (Bibishii) gives us a letter to let us in to the other kingdoms. One brother won’t meet us anyway, but the second is actually a Mouki. I had to do some grinding to beat him, but eventually I was able to. 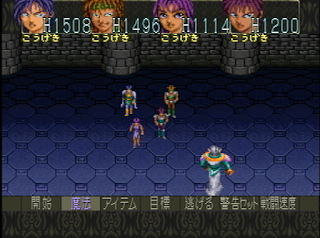 It turns out that this king, Madara, was captured by a small island kingdom to the south with the help of Jato, and this Mouki replaced him. So we head down there and rescue Madara, who then decides to join us. There’s an interesting fight then against one of Jato’s monsters, but even if you lose, the game continues. Jato had been controlling the king of this small island kingdom but one of his underlings breaks the mind control. This solves all the problems, and with the 3 keys united, we’re able to go into the catacombs and get the second tablet. Madara also joins the party.

One final annoyance — the way you cast magic is to first choose the spell, then who casts it. In theory there’s nothing wrong with this but it’s the opposite of every other RPG and I’m not sure I’ll ever get used to it.