I didn’t get as much time to play as I thought this week so I’m not quite finished. But the last post and the review will give me a buffer of a couple of weeks while I play Lady Phantom on the other blog.

I complained about the battle system last time; one additional complaint I have is that the spells are too slow. The battles move quickly for the most part, until you or an enemy cast a spell — then it pauses for a while, shows an animation for each person that gets affected, then shows the damage individually for each character. It’s far too slow given what they’re trying to make the battle system to be.

I am now starting to find the best equipment for some people — this seems early, but each character has one particular equipment that boosts their attack or defense much more than anyone else who equips the stuff.

We’re off to Fasie kingdom in the southwest, where the king seems to have been charmed by a priest of some cult, which is causing all kinds of strife around the kingdom. 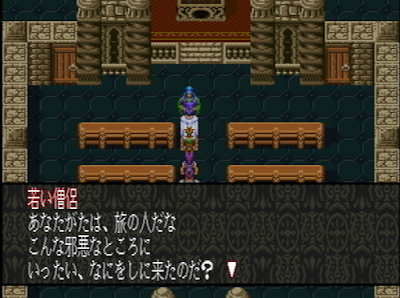 We meet a girl at the bar named Marf, who is a treasure hunter that wants to go out to the ruins, but when we follow her out there she gets trapped by an earthquake. It turns out she is actually the princess of the kingdom, so it’s imperative to save her — fortunately there’s a secret route into the ruins. We have to fight this mouki named Kanhoryuki again, but he’s not very hard. In general the bosses in this game are not especially difficult, with some notable exceptions. They tend to have very low HP, in some cases almost the same HP as the grunts in the same dungeon. On the other hand, the damage the bosses do can be very high. You can be in a situation where the grunt enemies do 3-5 damage and the bosses do 600.

The main purpose of these ruins turns out not to be a tablet, but just an old etching that tells us some back story of the world — Madara, Miroku, and Sakuya are three beings from outer space that fought a huge war, but then they agreed to cooperate to destroy, help, and rebirth the world in a cycle. Of course Miroku has ignored that and wants the power for himself.

Incidentally I’m also learning that a lot of the stuff in this game is optional; you don’t have to get all of the people on your team or do stuff like this to win the game. 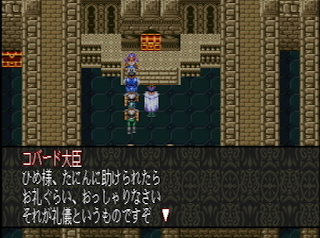 We still have to solve the issue of this evil priest. Next up we continue to an area with a magic school (finally a shop to buy magic; there aren’t many of these in the game).  We’re looking for a guy named Zaras but he is shut up in an observatory with Mouki. Once he’s saved, and we beat a mouki that was hiding in the magic school, it’s back to Fasie. Now that Zaras trusts us, we can borrow priest clothing from a guy in a monastery, and then sneak into the church. Unfortunately Daharka (the evil priest) recognizes us immediately and throws us into the Valley of the Dead. He hopes we’ll die there. 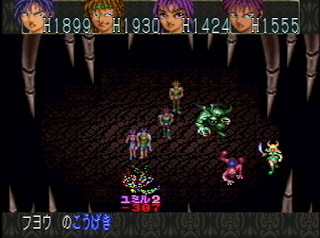 But the enemies are just what we’ve been facing before so it’s not that hard to escape, and then beat Daharka. Unfortunately this doesn’t give us a tablet, so I don’t know what the point was — off to a desert town in the south where we finally do find the third tablet held by a mouki. I’m not sure if some even in the Daharka sequence was necessary to get this to happen, but there’s no obvious story connection between the two.

Next we head to Yamahiko town to supposedly learn why Madara is destroying the world although I’m not sure we ever do learn that — instead we meet a guy named Koga Saburou who wants us to add a guy named Basara to our team. I didn’t follow this part of the story completely but for some reason Koga burns down the town in order to have Basara escape his destiny of destroying things, however that works.

We then have to deal with Bunkan in the nearby capital, who is using a fake Emperor Dakini to rule the destroyed Cosara Kingdom. We’ll have to wait until near the end to deal with Dakini, but now at least we can dispatch Bunkan, and then Koga lets himself die in order to free Basara from his fate — once again, I’m not sure exactly what was going on there. 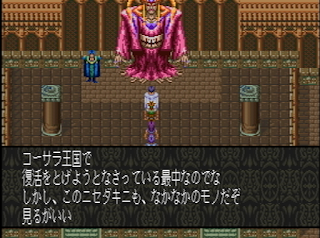 The last tablet is in the basement of Rasen Castle in the north, but the tablet will not let us take it without proving ourselves. To do that we have to beat the Mouki that are being used by a rival army. We do so, but it turns out we were just a decoy while the main force destroyed the rival army’s castle — oh well, at least we get the last tablet.

Finally we can return all the way to Jofuku who initially sent us on this quest, and he reminds us that the 5th tablet is north of the Great Wall. The 4 tablets so far open the Great Wall, and we proceed to the north. 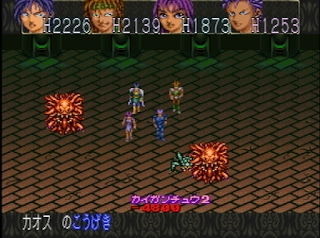 In the north we have to seek out the camp of the Mukuri tribe, which changes based on the “season” — instead of day and night, this has four seasons, but it’s basically the same thing and doesn’t affect the game most of the time. At the camp, the last party member, Chaos, joins us. He leads us to the labyrinth where we find the final tablet. Now at least Kurisu can get to Yuiman to find Subaru.

The passage to Yuiman is in the Castle at the End of the World, where we use the 5 tablets. A fake castle is set up by Kanhoryuki who we fight yet again, but upon beating him, the way to Yuiman is open. Of course that rabbit mouki Jato tries to run up and get to Yuiman, but we finally manage to block him rather than just letting him do whatever.

Sakuya is waiting for Kurisu in Yuiman. Subaru is there also, but only her spirit. Her body is still with Emperor Dakini. To get to Dakini, there’s another multi-fetch quest, this time to get the Yato Mirror, the Nisakani Jewel, and the Kusanagi Sword. The first two are in Yuiman, but the Kunasagi Sword is in a part of Yawato Kingdom (in the overworld) that we never got to. This is accessed by a cave north of Sakuya’s town.

Wait a minute — we spent over 50% of the game getting tablets to open up Yuiman, and all that time there was a passage there in Yawato that just had one dude guarding it (who probably would have let us past since he works for Sakuya). Why did the designers do that? 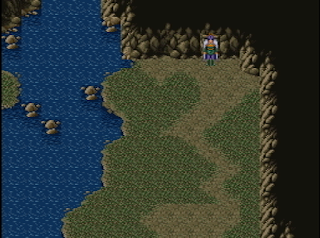 Anyway, once the three treasures are recovered we can finally return to Kosara Kingdom and beat Dakini. The first time I fought him, I thought it was an auto-lose story battle because he killed everyone except Kurisu in one hit. But no, this is actually what you have to fight. 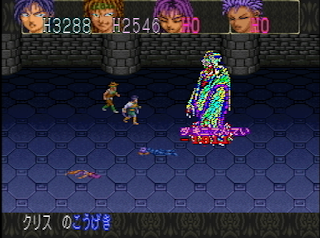 His HP are rather low like most of the bosses, so it’s mostly a matter of casting spells really quickly and hoping he attacks Kurisu, who can be healed. As you can see two of my guys died but I did manage to beat him.

Of course Dakini is just an avatar of Miroku so the game’s not over yet — there’s only about 10% of the game left but I’ll cover it in the last post.