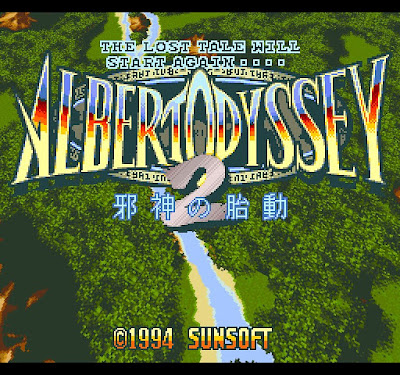 When I created this blog as an additional project to my Super Nintendo one, I intentionally did not make rules about how long I would play each game. My list of games right now has over 500 games — a good chunk of those are remakes/ports that I won’t be playing, but that’s still a lot of games. Too many for me to suffer through a game I don’t really want to play.

This is the direct sequel to Albert Odyssey, a game I covered before. I didn’t like the game all that much. What makes this game stand out is the decision to have the entire world map be an SRPG-style dungeon. This wasn’t the only problem with the original game, but most of what was bad about the game stemmed from that. Although AO2 solves some of the issues with the original game, the “world map is one big battle” idea still basically ruins the game for me.

The game begins by repeating the sudden ending of the previous game, and then switching 10 years later, with a princess named Yuna and her mom running from the Lukrenan kingdom, pursued by dragon riders. She crashes near where the main character (Kurisu) is training with Wiseman. The Queen soon dies, entrusting her daughter to the care of the king. 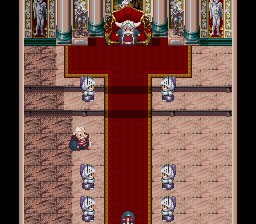 The next day, the harbor town Maurina is taken over by Lukrenan, and a general comes to the king to ask for Yuna back. The king refuses, and we need Albert’s help. Kurisu goes out to his hometown to find him. 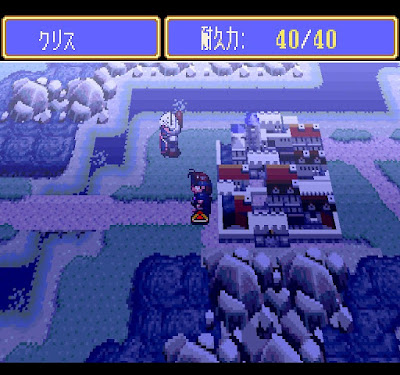 Right off the bat there are three big improvements made to the game:

The battle system is basically the same as the first except MP have been added (in AO1 you could use any skill as many times as you want), and hit rates are much lower. Each character attacks twice, although counterattacks can happen as well (cancelling the attack). It’s rather unpredictable. 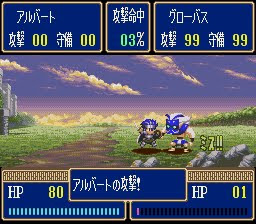 Kurisu learns that Albert has gone on a journey to find a way to cure Sophia (who is in a magical sleep), so Kurisu heads out to free Maurina from the invaders. Meanwhile Yuna is captured so we then have another task ahead of us.

Morse, a priest, and Claire, a magician, join to fill out the team. But now we go to Maurina and there don’t seem to be any invaders — I’m not sure exactly what happened there. Instead, the characters hire a captain to take them over the sea to Bekutora. From Bekutora, we fight through to the city of Akos. Now there are two routes — an optional dungeon to the north and a shrine to the south. I went to the dungeon first, which has treasure chests. The keys for these chests have to be purchased in the town, which used most of my money.

The dungeon levels are very small, meaning you quickly get overwhelmed. I did beat all the enemies on the first floor and recover the chests, but Wiseman died. I wasn’t too concerned because revival is cheap at churches, so I headed back to Akos (moving just Kurisu, it took 2-3 minutes). No church in Akos. So I headed back to Bekutran (another 2-3 minutes). No church. I had the captain take me back to Maurina, where I could revive, and then headed back to Bekutran. Some enemies had respawned, so it was going to take another 20 minutes or so just to get back to the dungeon. AO1 had items that could warp you back to towns, but they seem to have been removed from this game.

And that’s where I stopped. As I said above, the “world map is one big battlefield” concept just doesn’t work, at least in the way Albert Odyssey has implemented it. I’m not aware of any other SRPGs that do this, and playing AO and AO2 it’s easy to see why. Even Sunsoft abandoned the concept, and the next time we see Albert Odyssey is the “Gaiden” game for the Saturn that Western players are more familiar with.

I’ll be curious to see if any other title does try this at some point. But having to spend 30-40 minutes to revive a character is ridiculous. I could probably power through this game because it’s not all that long, but with 500+ games ahead of me it makes sense to move on.

Here are two other very negative reviews of the game, one from RPGGamer, and the other from GameFAQs.

Next will be the final game of 1994, an overlooked Masaya game called Power of the Hired.