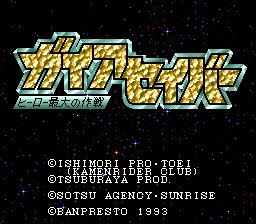 1994 in Super Famicom games start out with one of the most infamous kusoge for the system. This game is widely despised by Japanese players, with entire pages written in listing all the ways it sucks — I think more time has gone into criticizing this game than went into its production. 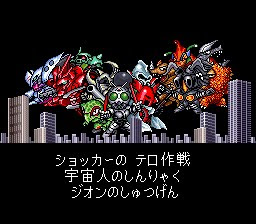 This is another game in the Compati Heroes series, and it is a spiritual successor to Hero Senki, which I played earlier on this blog. It’s a crossover of Gundam, Ultraman, and Kamen Rider. I wasn’t a huge fan of Hero Senki, but Gaia Saver makes it look like a masterpiece. The gameplay is worse in pretty much every way. The story of Hero Senki was confusing to me because it relied too much on knowledge of the original franchises — the story of Gaia Saver barely exists. One of the big complaints people had is that it shits all over the original characters and stories of the franchises, something I can only appreciate with Gundam.

I’ve mentioned before a site that has reviews of almost all SFC games, and he has one section for the “9 Gods of Kusoge”; this is one of them — he seems to think it’s one of the worst of the 9. I somewhat disagree because at least the game is fast and short, but there’s very little redeeming about it.

It’s divided into eight stories. As you progress, depending on your actions, the population of the world decreases, and you can see the current population in the status menu. Apparently this affects the ending, although due to a programming mistake it’s impossible to keep the population high enough to see the best ending.

But all the “stories” are just a mishmash of little scenes and characters taken from the various franchises, with no real connection between them. And if you don’t already know who these characters are, a lot of what happens makes no sense. The game also gives you very little direction for where to go next, or why you’re going there.

The first story begins at Jaburo, during the First Gundam story (I guess). There’s a disc we need to have analyzed, but the scientists Amuro takes the disc to can’t deal with it. The first thing you notice is the absurd random encounter rate, which is high even for games of this period. 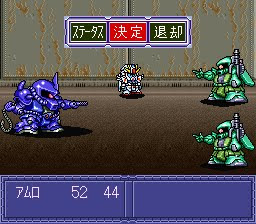 The battle system is basically auto battle, but you can select what people will do if you want — since there’s no indication of what any of the skills do, and you miss a lot, I usually just went with the auto battle unless I had to heal or in a boss fight sometimes I would choose a good ability. The graphics are decent in battle, but that’s about as far as the good parts of this game go.

Almost all the enemies have only a basic attack, with no special powers at all.

There are also buyable items and equipment, but there’s no indication of who can equip what or what effect any of it has. Money is very scarce in this game and I hardly ever bought equipment; I spent most of my money on heal and repair items.

As in Hero Senki, you restore all your HP after each battle. MP/tech points are restored by going to these locations on the map (or levelling up): 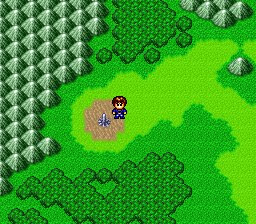 The graphics are the same RPG Maker style as the previous game. 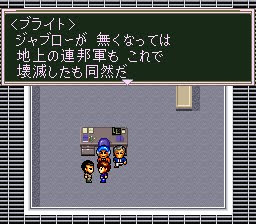 The first boss is Zangeor — he might be from Kamen Rider or Ultraman; I have no idea since the game makes no effort to introduce him or tell me who he is. I beat him with autobattle like all the other enemies, and the first story ends with no real resolution — there’s something mysterious going on with stone circles, but that’s about it. There’s also an original character Mark Hunter, who joins and leaves every so often as the story progresses.

The game uses about three dungeon designs over and over again. You’ll be going through this dungeon 5 or 6 times: 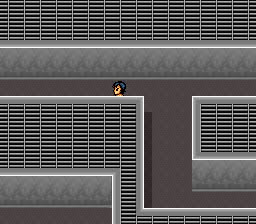 As well as another one that looks exactly like it with a different design.

The rest of the chapters continue on in the same way — elements from the three series are introduced randomly, with no clear connection between them or explanation of who anyone is. The dungeons are just recycled over and over again with the lack of direction and ridiculous encounter rate. Oh, there also aren’t any chests or anything in the dungeons — just empty rooms and a boss, who says one line (if that) and then fights you.

Eventually the nature of the overall plot becomes clear right at the end of the game. There’s this System that is powering itself off the conflict of the humans and is going to kill them off and destroy the Earth to stop the repeated wars. 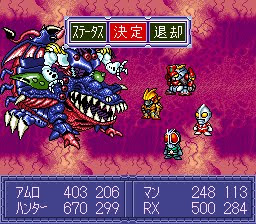 We defeat him, but that’s not quite it because we still have to turn the Ultra Killer back into Zophi. Previously Amuro had become the Gundam Killer but got turned back to normal, and Rider 2 became the Rider Killer….and dies. This is another big complaint about the game.

But we’re still not done! As you leave the final dungeon, the Yapul from Ultraman shows up for no reason, with no introduction, and just says “Who are you!?” and fights. 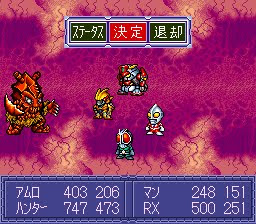 He goes down quickly, and the game ends by telling you that half the Earth died and hopefully people can do better in the future.

As I hope is clear by now, this is one of the worst games I’ve played so far on this blog. There is virtually nothing redeeming about it, whether you’re a fan of these series or not. Just a pathetic effort.