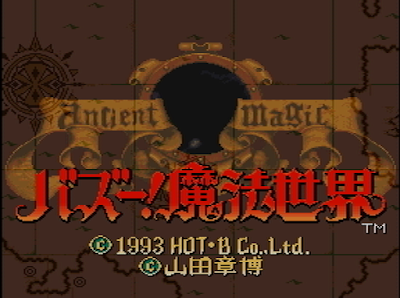 One site that has reviews of most of the Super Famicom RPGs has a section with what he thinks is the 9 worst games. I’ve played a number of them (Maka Maka, Villgust, Light Fantasy, Cyber Knight, and Song Master). Bazoe! is in that list as well, but he admits it’s a personal dislike. While this isn’t a masterpiece, it’s nowhere near as bad as those other games, especially if you play on an emulator with a speedup key.

The developer, Hot B, went out of business the day after the game was released, and there’s also a story of the lead programmer disappearing during development, so some of the issues with this game might be due to unforeseen problems. Overall I would say so far this is a game with a good story (for 1993) but a bad system.

The instruction manual gives the backstory — there was once the Gazelfan Empire, but that magic kingdom was destroyed by the “great catastrophe” and monsters overwhelmed the world. An order of knights formed and destroyed the monsters, and then the Gazel Kingdom was formed. But Gazel broke up when the knights, priests, and magicians struggled with each other. They separated into the Duelfan Kingdom, the Nefan Kingdom, and the Ralfan Kingdom respectively. But after a while they allied with each other. Currently there is peace, but the Mirror of Paru has foretold that a new era of demons is coming. 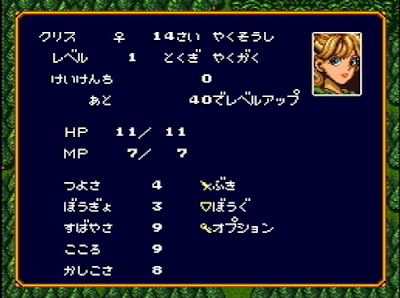 The game begins by letting you chose a sex, name, and parents’ occupation. I went with the girl herbalist. She begins as a 14 year old level 1 girl, with no equipment. I don’t know exactly what the choice of profession does — when entering new areas she’ll sometimes make a comment about the kind of herbs you can find in the area but you can’t actually get any. So it may just be for atmosphere and background.

This is Kurisu’s 14th birthday, and a magician named Nash comes to deliver Kurisu’s father’s dying request — to have Kurisu become a magician like he was. Her mother is hesitant because she says it was magic that led to her father’s death, but she vows to accomplish her father’s wish.

The first task is to get an introduction letter to the magic school from her uncle, who is a Baron of a nearby area. Along the way we have the first fight. 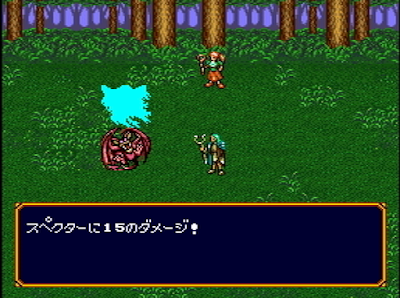 The chief problem of this game, familiar to a lot of lower-quality games of this era, is the ridiculously high random encounter rate. The battles also move fairly slowly, and a game over sends you back to your previous save. So you can spend a lot of time in a dungeon just to be defeated by the boss.

The battles start with the enemies and allies separate from each other. You can cast spells or fire bows, but to attack you have to close in, which takes two or three actions. The enemies may also try to close in on you. It’s an OK idea but it makes the battles too slow for the encounter rate. Kurisu also starts out with no equipment or abilities, so you basically have to hide her while the bard Fale takes care of the enemies. 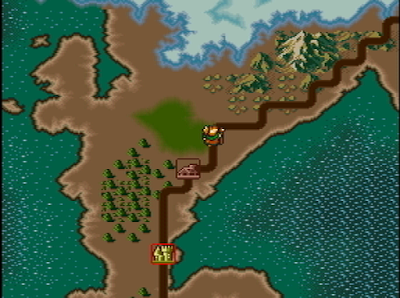 When you reach the edge of an area you move along a world map like the above. You can also sometimes hire ships or carriages to take you from town to town. Unfortunately despite the large number of spells in this game, there is no town warp spell, or dungeon warp spell. There’s also no revive spell, which is a huge problem in a game where enemies can cast instant death spells — another instance of poor balance. 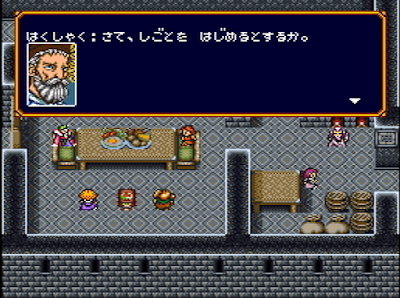 Unfortunately Kurisu’s uncle is rather mean and dismissive, and only when his son Romal (a knight) objects does he say that he’ll write the letter if she can prove his worth. She starts out as a servant, but she does her duty. Finally under Romal’s complaints the Baron says she needs to get his seal from a nearby tower. To prepare, she spends three months studying sword use under Romal, and is finally ready to go. 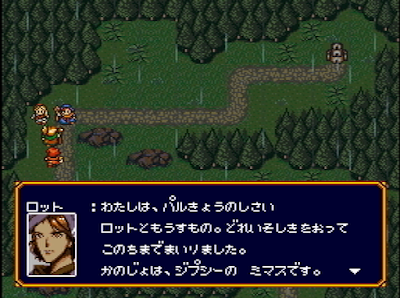 The enemies are pretty tough and I thought I was going to have to do a lot of slow grinding, but if you approach the tower you get two new companions — the priest Lott, and his friend Mimas, who lost her family to slavers and doesn’t talk much. With their help the tower is fairly easy. 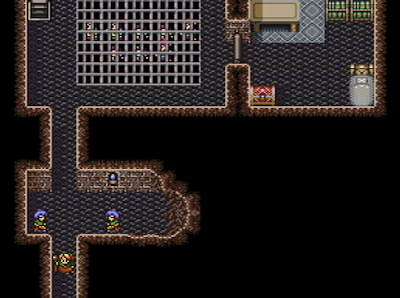 Unfortunately it’s being used by slavers, but we’re able to free the slaves and find the seal. The boss starts to be a person named Croizel, but he runs away, leaving us to fight underlings. 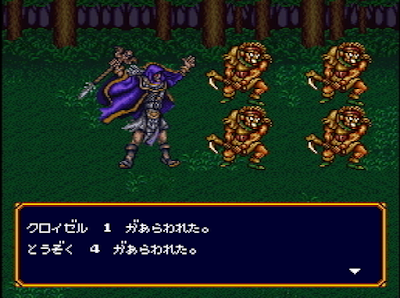 With the seal, the Baron is happy to write the letter, and Romal joins her on her trip to Seles, where the magic guild is. They accept Kurisu, and she begins to learn magic. 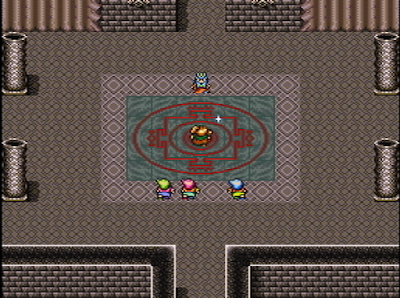 She’s a quick study with high aptitude, and learns the ice magic Chiru that her classmates can’t. She also takes a bunch of classes. Eventually it’s time to face the trial that will make her a beginning magician. It’s a series of puzzles and traps in a tower. I failed the first time because I fought a statue (instant loss) instead of finding a hidden staircase. But on the second try I succeeded, and Kurisu became a real magician. She learns that the main goal of all magicians is to recover ancient magic lost in the great disaster.

I next had to select a master from three possibilities, which determines the spells you get automatically (other spells can be learned from scrolls). I chose Maclellan, the Spirit teacher. But after having played over half the game, I think a better choice is Balhalrik. The damage spells are poorly balanced and don’t scale well — that is, the upper level damage spells cost way too much MP for the extra damage they do. So Balhalrik’s buff and exploration spells are probably more useful overall.

The way the magic system works is that you can have 16 spells at a time. If you have a scroll, you can cast the spell directly from the scroll, or go to a magic guild to learn it permanently if you’re high enough level. Each school of magic has 8 levels of spells, but the 8th is a “lost” magic you can’t buy or learn from guilds.

Now that I am an apprentice of Maclellan, he sends me off to pick up two medicines from Hybres. There’s nothing to this mission beyond visiting Hybres and returning, but I stopped by mom’s house on the way and she gave some words of encouragement.

Maclellan’s next mission is to get the Eye of Gods from Dal city. 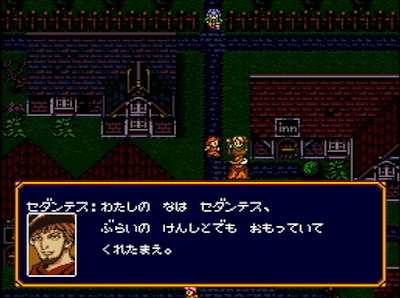 At Dal we learn that impostors picked up the Eye before we got there. A pickpocket named Milene gives us the valuable information that it was stolen by a priest of the Shar Telis religion. Fortunately, we’re joined by Sedantes, who is also investigating the religion — they’re instigating a coup d’etat in the area under the name of General Jal. 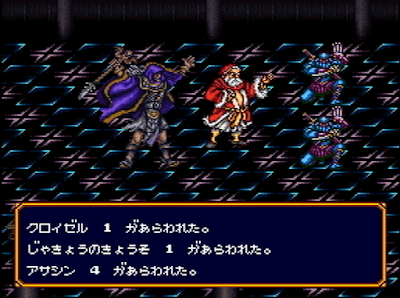 After gathering some information at night, we break into the religious stronghold and expose the fake General Jal — it turns out Sedantes is the actual Jal. At last we fight the religious leader, who is backed by none other than Skeletor Croizel, who runs away again. The fight isn’t too hard, but magicians can be annoying in this game because they hide behind the fighters. If they cast sleep it’s especially devastating because there’s no way to wake someone up.

So Kurisu solves this problem, and Jal stays behind to work for liberation. Back at the magic school, Maclellan teaches Kurisu the last basic magic spell, and she is now officially a Low Rank Magician. 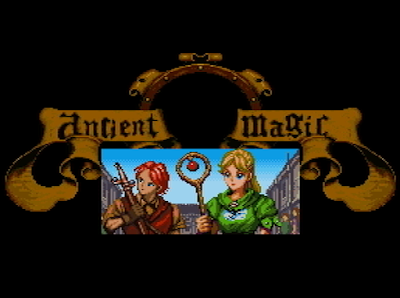 One year passes, while Kurisu works on her magic and Romall continues to train as a knight. Eventually we get another mission from Maclellan — go to the ruins of Vamel to look for lost ancient magic. This requires a lot of travelling overland, which means a lot of random encounters, but finally Kurisu reaches Vamel. Along the way, the thief Milene is there again to tell us the sultan of Vamel is scared of the Burud race, and has teamed up with some strange allies to stop them. 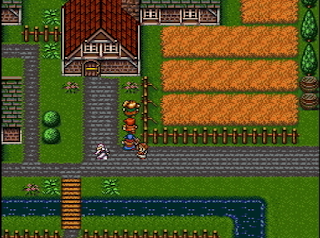 At Vamel, the vizier approaches us and tells us about a mission for the Sultan — find the Seal Mark below the city; if we don’t trade that for protection, the Burud will destroy Vamel. 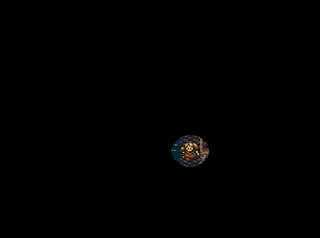 The dungeon has dark areas so I need either the Sunburst spell or torches, neither of which I had, so rather than facing tons of random encounters to go back and get them I just trudged through. The end of the dungeon has us fighting a monster named Jala, who became immortal but was then sealed away. He casts an instant death magic, which is devastating. 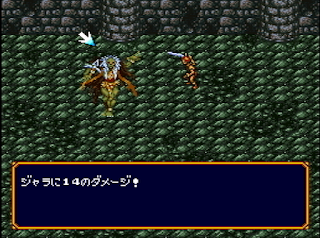 You have to fight him twice — the second time he just spammed the instant death spell over and over again and I had no chance. Game over, and I was facing the repetition of about 90 minutes of random encounters to get back to him. Fortunately I had made a save state about 3/4 of the way through because I had to go to work, so I waited until Thursday until my first week of play was up and used that save state. Now that I could speed up through random battles the game got a lot more bearable as well.

The second time I fought him he didn’t use as many of the death spells and I got some lucky resists, so he went down. 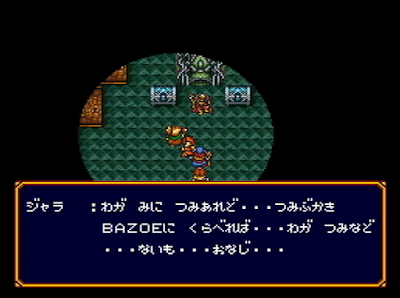 Jala wonders why he is sealed away when his sins are nowhere near as BAZOE — this is some evil thing from the past, which is where the silly title comes from (why the exclamation mark, though?)

Now I return to the surface (no escape spell of course). I refused to give the seal to the Sultan, though, and rightly so — it turned out the guy asking for it in exchange for protection was Croizel again, who grabs the seal and runs away. The Sultan wants our help dealing with the Burud, but very soon after this they destroy Vamel and block up the underground passage. Lott blames himself for some reason, but there’s not much we can do — we hope this will prevent Jala from coming out, but who knows?

Kurisu heads back to Seras, and another year passes while she studies magic — she’s now 17. This is about the halfway point (I think) so I’ll stop here. As I said, the story is not bad but the gameplay is a disaster. It’s not the worst of the worst, but they made a lot of bad decisions in the balance and system.