Stages 6-18 will be covered in this post; the rest of the game. One thing I realized after the last post is that it’s better to look at which types of magic each character is good with and pair them with summons that increase those types, so that you can cast the most powerful attack and healing magic.

(I think I accidentally deleted my screenshots of levels 6-8)

In stage 6 we’re still going after the main character’s brother. This takes place in a graveyard, with necromancers bringing weak undead out of the ground. The graves will run out of bodies after a while, leaving just the mages left to be killed.

Stage 7 requires you to defeat Alef; he starts running away after a few turns so you have to hurry up and get him. A common strategy for me in this game was to sacrifice the summons so that the summoners could survive long enough to get close to the boss and use all their attack spells to kill it. Which is what I did here.

Stage 8 is the last stage of chasing Alef. Like an idiot, he’s being used by the Emperor, but once the Emperor comes in and tells him that he apologizes and joins our side. Of course that makes everyone completely ignore all the innocents he’s killed, but that’s usual for anime/games.

Now we have to chase the emperor. Stage 9 is vs. a dragon: 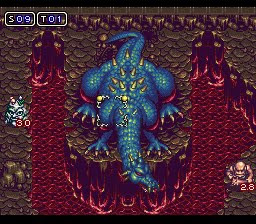 But we don’t have to beat the dragon. All we have to do is get one summoner to the top of the screen by turn 6, which is not too hard. 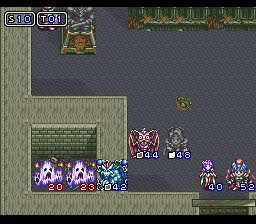 Stage 10 is a castle with nasty spirits hiding in the walls that come out after us.

On Stage 11, the Emperor just appears for no reason in the middle of a field with not very many troops, and he’s not very hard. The game does generally a poor job of making you think that there’s an actual empire you’re fighting. This stage is surprisingly easy. 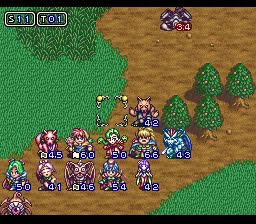 It also follows a pattern that many of the later stages do. The essential strategic difficulty in this game is that using magic takes your entire turn. So you can’t move and use magic, but most of the stages force you move in order to win (as in this stage, where the reinforcements are endless and the Emperor won’t come chase you). So you have to slowly move forward.

In Stage 12 we’re heading home and we come across a village where monsters are attacking; strangely given the Emperor is dead. So instead of going home we decide to head for Brozen mountain, where the monsters seem to be coming from. Stage 13 is on our way there; of course the Emperor is back. He’s trying to open a magic gate to bring forth a demon that he can control to rule everything. 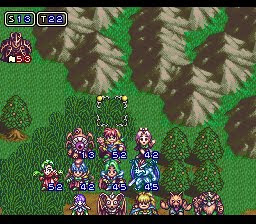 Stage 14 is against this huge octopus thing with tentacles. The game gets much harder from here on out. 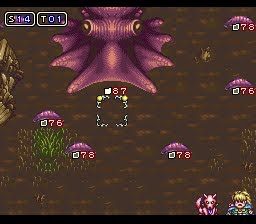 Basically you have to beat all the tentacles first (which is not easy) and then take turns moving in to kill him, with some attack buffs. 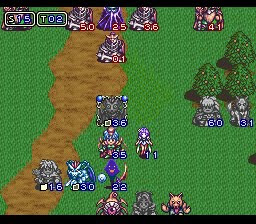 Stage 15 is the toughest one in the game. All the enemies start in range. You only need to kill the vampire to win, but it’s hard to survive long enough to do that (since any magic user dying is game over). Movement on the first few turns is important, as is Sleep spells and such. If you can survive to the second or third turn the stage can be won, but it took me several tries. Making sure that Alef and Lim (who start in the middle) can cast attack magic is a good thing.

In Stage 16, you have to have someone reach the cave entrance. This seems really hard at first because of the sheer number of monsters, but the important part is that the volcano eruptions on the stage hurt them as well as you, so a lot of them get killed or waste their turns healing.

Stage 17 and 18 are very similar. Both have a boss (Vampire for 17, Emperor for 18) who starts very far away, with endless reinforcements. So as I said above, you have to proceed slowly, keep your summoned units alive so magic can be cast, and then at some point abandon the summons and make a mad dash for the boss. I thought 18 was easier and managed to keep most of the units alive. 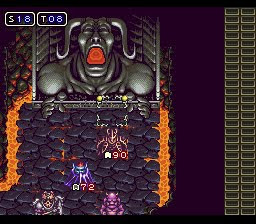 After the Emperor is beaten, the gate closes, and we all return home to our lives.

This is a game with a lot of good ideas but not great execution; I’ll say more in the wrapup.