Star Breaker is one of three RPGs developed for the PC Engine by Ray Force. The first, Startling Odyssey, was a cookie cutter RPG that I covered briefly some time ago. They followed that up with Startling Odyssey II, but Star Breaker came between them. I can’t find much more information about the game than this.

I’m going to try giving a bit more detail about the game by blogging while I play rather than taking notes and writing the post later. 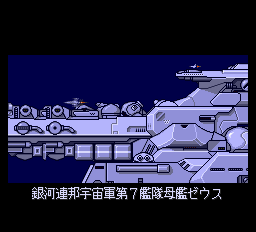 The opening narration tells us that in the year 2550, humanity has expanded into the galaxy, fought two huge wars with “non humanoids” and then created the Alliance Army, which both protects humanity and also keeps the peace in the galaxy. The main character is Harry, who serves in the 7th fleet. He’s testing out a new type of fighter, the Pegasus. He engages the warp, but there’s some kind of error and he’s blown into another dimension, and then shot down, crash landing on a planet. 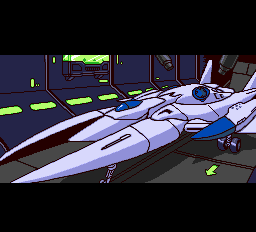 He awakes in a room in a castle, unable to understand what people are saying. But a woman comes out, who calls herself Princess Aria. 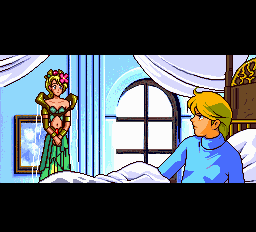 She uses telepathic means to help him understand the language and also to learn about him. Apparently he’s been shot down by the Doran, who are enemies, and he’s on Menalis planet. She asks him to talk to her father the king. Now we get to control Harry. 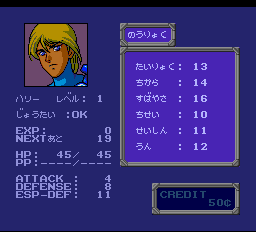 The status screen looks pretty typical (I assume ESP is the magic of this game, and PP will be for the psychic/magic characters).

I explored the castle, finding some basic equipment to outfit Harry. The king had basically nothing useful to say, so I went down into the basement to see how the Pegasus is doing. Apparently they can’t fix it, but the Pegasus tells me that if I can find some parts from the Doran ships, it should be possible to repair it. So we’ll have to infiltrate a Doran base nearby. 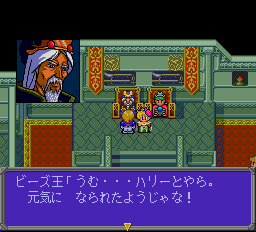 Surprisingly (or not) Aria begs to come along, and the king lets her, also sending the ship technician Oregano. 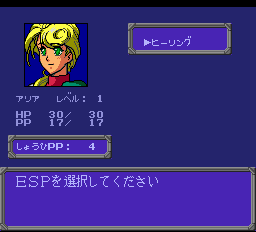 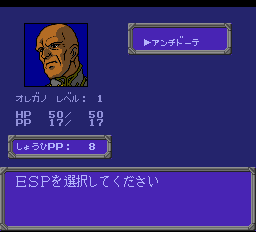 Aria has a healing spell, and Oregano has Antidote. They also have some battle spells. The PP they have looks very low, and I’m afraid this will be yet another game where you really can’t use magic because it’s so limited. Time to go out to the castle town.

Oregano and Aria came with equipment, so I just gathered information — the most important was an old man who told me to look for a guy named Baki who could help us with getting into the Doran base, and gave us a music box. Now for the world map. 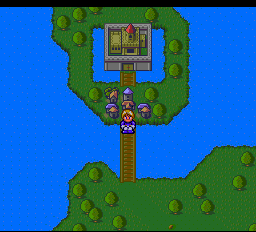 Usually at first I try to get in a fight right around town to feel out how difficult the encounters are. 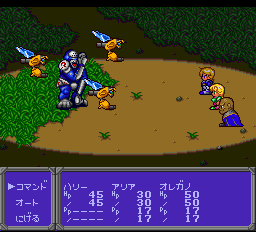 There’s an auto battle; given my resources now I think I’m pretty much limited to attacking and healing. The enemies took a lot of hits to take down, but they gave 9 XP and my guys only need 19 to raise a level so I’ll gain one or two levels before moving on. I generally don’t like grinding but often it’s important right at the beginning.

The level ups turned out to be pretty significant; they provide full heal of HP and PP, and the stat gains are high. At level 2 I started exploring a bit beyond the area, and soon reached level 3. I also bought better equipment for everyone. 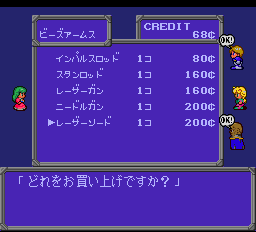 Of course you can’t see what the stats of equipment are. It’s 1994! Final Fantasy VI is coming out in two months!

The next town, Soreid, gave me some information. I’ll need to take down a shield to make it into the Doran base, and the mine nearby has been taken over by Doran. Baki turns out to be the mine leader, but he’s drinking in a bar. They want me to bring his wife to the town to restore his confidence. This is in another town, but my guys are now strong enough to beat the random encounters in this area with no problem. 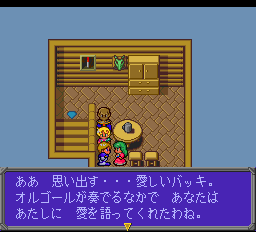 The music box I got in the first down plays their wedding theme, and she agrees to go with us back to Baki. He lets us know that the shield generator is in the mine, and gives us some dynamite to help out with that. 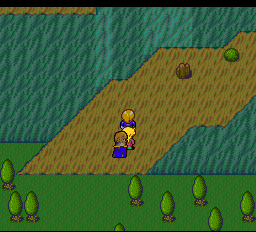 The mine has the same enemies as outside, so my level 5 party had no difficulties, especially after finding some equipment upgrades for Oregano and Aria. 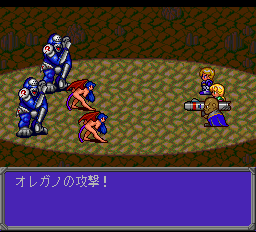 There’s no boss fight, so I destroyed the shield generator with the dynamite. 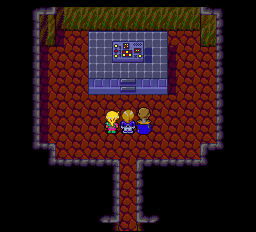 On the way out, I met this nasty enemy, who I think is just a random monster. But everything heals him except Oregano’s attack spells. 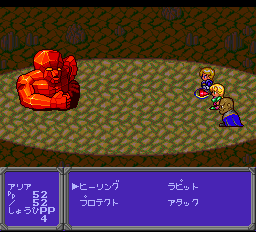 Now that the shield generator is gone I can head north to the base. The cave leading to the base had the same enemies as before, so I got through there fairly easily, moving up one level in the process. 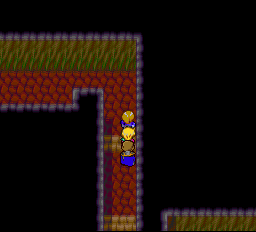 The base is nearby. The monsters seem mostly the same, but I did encounter these nasty frogs, who use all-attack spells and can’t be hurt by most of my attacks. 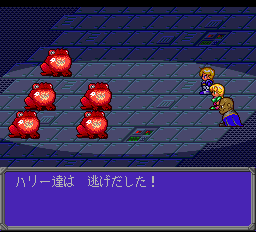 Aria was at 7 HP so that was close. Now inside the fortress there is a tantalizing save point that I can’t get to yet: 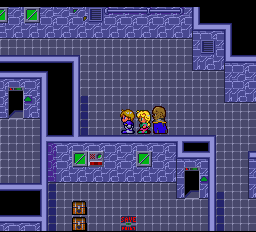 But it was easily reached by going up those nearby stairs. Proceeding through the fortress, I eventually found the C Module I needed, but then a boss appears. 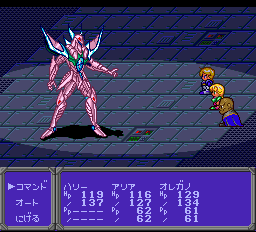 He uses a nasty all-attack and some big attacks, and my healing can’t really keep up (both Aria’s healing spell and the Heal Ampures I’ve been getting from fights and chests) heal less than a single attack from the boss. I died the first time so I guess I’ll try one level up and see if he’s easier at level 8. Harry had gotten a move that takes 1/8 of his HP off, but it seemed to do almost the same damage as a basic attack, so that’s not worth it.

This was sufficient to beat him. Of course he blows up the base, and then takes off in a ship, which goes over to destroy the castle. 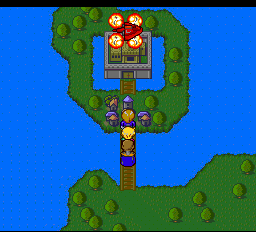 Making my way into the castle, I learn that the King has been captured, and agree to go after him, so it’s time to fix the ship. 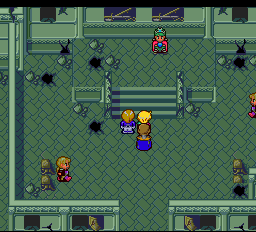 The ship is soon fixed, and Harry decides to stay in this dimension for now to help Aria find the king. They take off, and head to space station Ios. This is a neutral area with many Doran soldiers. There’s a shop which seems to have things for the ship, but they’re way too expensive. 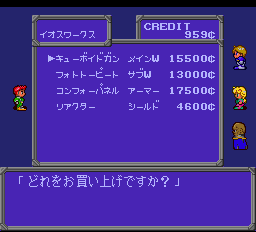 The next destination seems to be the other planet in this system, Rimurus, so I head over and land there. 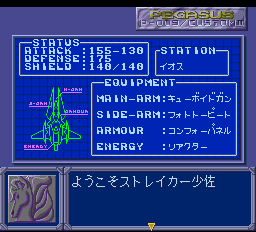 This menu indicates that there is some sort of space combat, but it’s evidently not a major part of the game. 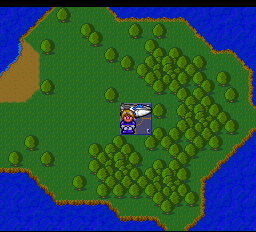 And I land on Rimurus.

That’s where I’m going to stop this game. As I’ve said before, PC Engine games have to clear a higher bar for me to play them beyond a few hours. By far the biggest surprise in this blog has been how slow developers other than Square and Enix were to innovate. Final Fantasy VI comes out two months after this game. It’s just stunning to me that at this late of a date, it’s still acceptable for studios to be publishing RPGs where the gameplay is essentially Dragon Quest II.

This game also makes fairly poor use of the PC Engine; there was one voiced sequence at the beginning and some of the music is off the CD, but it’s mostly just the same as you would see on the Super Famicom.

Next up will be Xanadu, an original action RPG by Falcom for the system.