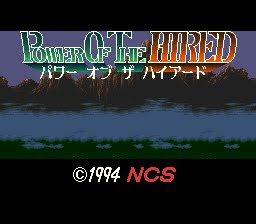 The final 1994 game is a rather obscure game published by Masaya for the Super Famicom. The name is kind of strange, but refers to the “hired” (summoned monsters) giving magical powers to the summoners. It seems overall like a fairly short and light game.

The backstory is that the main character (Kurisu as usual) is from a village of monster users, who are distrusted by others. Kurisu’s older brother Alef and his friend Rim are leaving for the capital of the kingdom, and the first battle starts while seeing them off. 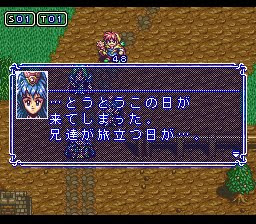 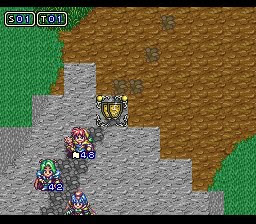 This is sort of a prologue battle because there aren’t any summoned monsters yet so you’re just attacking (although Kurisu can use a few spells). The goal is to save the villagers from the monsters, which isn’t very hard. After this, the story jumps forward a few years as Kurisu leaves the village herself. Word is that summoners are working for the kingdom, which Kurisu finds unacceptable — they’re supposed to stay neutral from politics and wars. So she sets out to see what’s going on. The first real battle pits her against a group of thieves, who have set fire to the area (which slowly advances). 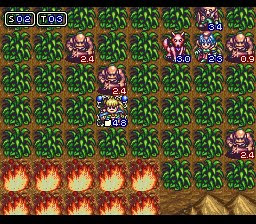 Before each battle, each character selects two monsters. Which monsters they can select are determined by their level.

Each monster, in addition to their stats, has  獣魔法 numbers at the bottom. In this case, the Wolfman has 4 in every stat. If the monster is adjacent to the summoner, these numbers will be added to the summoner’s own numbers to determine what magic they can use. The monsters can level up themselves and gain stats. If a monster is defeated, they leave for that battle. If a summoner (any summoner) is defeated, game over.

Since there is no equipment or items, that’s pretty much the game system. The summoners gain MP back each turn, so using the magic is fairly free although you have to use it before moving. Many battles force you to move to complete the mission objectives, so that does limit the ability to use magic. For instance, in this second battle the fire will engulf your troops if you stay in one place for too long.

Every attack is followed by a counterattack (if the defender is in range).

Dino comes in after a while, he’s more fighting oriented.

So on stage 3 and after I tended to give the more magic options to Kurisu and let Dino have the others.

Stage 3 has us trying to defend a town from some monsters attacking; and it turns out that Alef is in command of them. Rim is hesitant to attack Kurisu, but Alef is now working for the kingdom, and anyone in his way will be defeated. He leaves before we can actually reach him, and there start being reinforcements on this stage. There are also enemy summoners with their own magic, which can be nasty. There is a heal command that everyone has, though, that restores a bit of HP to themselves. It can’t be used post move. 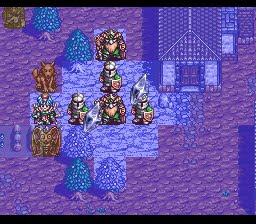 On Stage 4 we continue to chase Alef across a bridge, but he breaks the bridge down. One segment crumbles behind you every turn so you have to move forward. The first time I was too quick and got a game over from being swarmed; the second time I just made sure I stayed ahead of the bridge and did fine despite two waves of reinforcements (again, Alef and Rim leave).

On Stage 5, the goal is to protect an allied commander for 15 turns. He gets endless reinforcements, as does Alef, and Rim blocks our way upwards. I found the commander didn’t really need that much help, and I thought the enemies were too strong for me to defeat Alf, so I just waited out the 15 turns defeating whatever soldiers got near me. 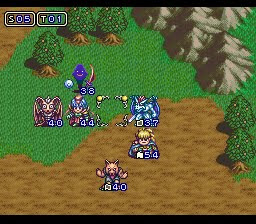 I also got access to some new monsters — the gargoyle thing and the Shadow.

There are 18 stages so the game is not very long as a whole; I’ll probably have it beaten in a few more days.