At the end of the last post we had retaken Durgwand Castle from Ostracon. The next main goal is to defeat the demon king Garcia, who is (appropriately) in the Demon Castle. We hope that the Priestess of the Sea, living in the Kasha Islands can help us. On the way, a researcher named Warumaru helps restore Hasram from the black crystal that Ostracon trapped him in. 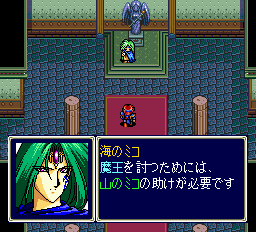 The Priestess of the Sea tells us that we need the Mountain Priestess’ help as well as various ancient documents that can be recovered from nearby caves. As we explore, Garcia’s troops attack us to stop us from getting that power. Once all the documents are recovered, the Priestess gives Tamlyn a “teleposta” (without explanation, and it can’t be used) and a secret message.

Now it’s on to the Mountain Priestess, and along the way we actually have to fight Garcia himself. 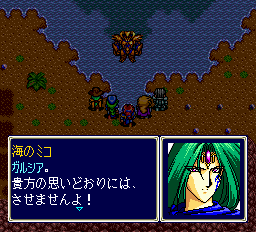 Fortunately the priestess helps us out, and Garcia flees after we beat him up. Now on the Mountain Priestess, whose temple is right next to the Demon Castle. Garcia kills the priestess but she opens up the way to his castle.

The castle is a very long dungeon with a whole bunch of boss fights. This is really where I felt the tedium of the game. 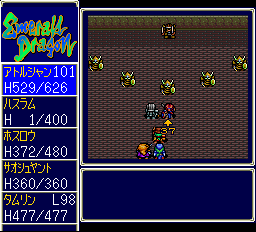 Eventually, we come to Garcia himself. 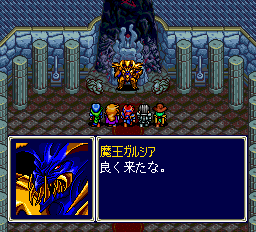 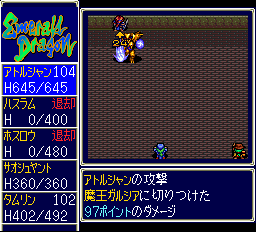 Who really is not that hard. Tamlyn has learned this laser beam spell that does an enormous amount of damage, and when she can use that rather than healing it makes the battles go a lot more quickly. If only I could get her to use that instead of healing the other NPCs!

Now once Garcia is beaten, the game’s not over yet. He reveals that it was the Hors people that summoned him and had him get the Avesta. We’ve been hearing about the Hors throughout the game — they created the world, they were called gods, etc. And Tamlyn reveals that she herself is a Hors, as she uses the Teleposta to take us out of the crumbling Demon Castle.

So while the world celebrates the defeat of the Demon King, the party decides to continue investigating to see what the Hors are up to. 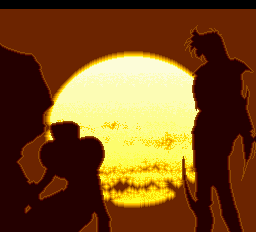 After a few quests we manage to get through a cave to the land where the Hors live. A bunch of them confront the party, but after realizing that Tamlyn is the princess, they take her and throw the rest of the party in jail. 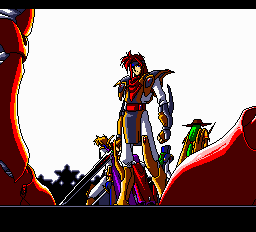 It turns out that Tiridates, the Prime Minster, has taken control of the government after the king’s death and Tamlyn’s disappearance. He wants to use the Avesta to attack and conquer the outside world. Fortunately a faithful knight Jessil rescues everyone and we prepare for the final assault. The final dungeon is not very long and has a lot of really good equipment for everyone. 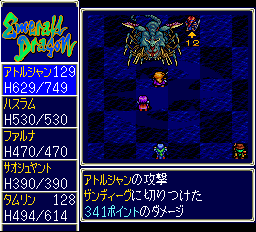 First we defeat Tiridates, and then he turns into the demon Zandig, who had been controlling his body. Zandig is not very hard with Tamlyn constantly laser beaming him for thousands of damage a turn, and he goes down quickly. 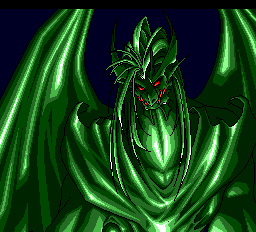 Now the power of the Emerald Graces restores the Emerald Dragon, who seals away Zandig. Atorushan decides to stay in the human world with Tamlyn, and the game ends. 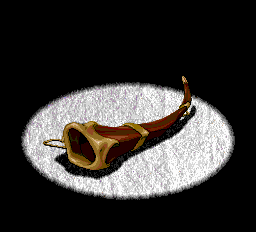 Overall I found that the game got pretty tedious as it went on. The story is fine, and the visuals and music are great. There’s lots of voiced dialogue, and the animated sequences are well done. The ability to talk to your characters (by pressing start) is a good touch that fleshes them out a bit.

The real problem is the gameplay. At first I felt like the encounter rate was reasonable and the battles were enjoyable. But eventually I got tired of every battle being the same thing — you just run into monsters, and maybe use a healing item every so often. Tamlyn has a lot of interesting spells but you can’t control her use of them at all (and because of the way the battles work she tends to use a healing spell most of the time). I think this is an artifact of the game being made originally in 1989.

I’ll try out the Super Famicom version when I get there (in 1995) to see how that version goes. My other blog has a good number of SFC games coming up so be sure to check that out as well.