We go back to 1995 to stop Ogiwara from killing Naoki’s parents. I continued to develop my guys and try to move the main character up as many levels as possible, and recruit monsters when available. It’s especially important to have flying units — they tend to be weak, but they’re often important for protecting the base or reaching enemies.

Make sure that you have a Pixie (which you can get before this) before doing Shinjuku. It’s a pretty mean secret, but if you don’t have that you won’t be able to get some of the most powerful units in the game on the Law/Chaos routes. It opens up Ikebukuro, which has an important item (the Eden Bugle) in it.


The first few stages weren’t too bad. I thought Ginza was the most difficult one in this scene. 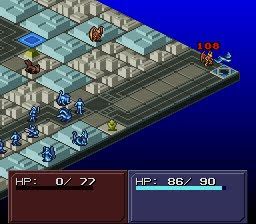 The base looks safe because of the blue buildings (which can’t be crossed by non-flying units). But there are flying devils at the top who will come down and get you. It’s good to have a Houou-type unit (the birds) because they have double advantage against the devils; I was able to hold out against them with just my bird. But that’s just the beginning. 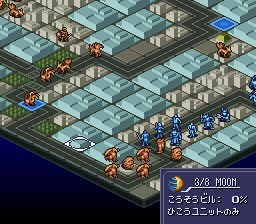 The multi-headed dragons at the left are Yurungs, who have very long range and a high attack power. They can only attack long so if you can get to them they can be taken out. But they can’t be easily reached because of this Lilim who has a ridiculously high HP. Meanwhile the generator is spitting out ghosts. You just have to make sure you don’t move into the Yurungs’ area of attack and slowly whittle down the HP, then deal with those 4 harpy things surrounding the generator. Then I was able to move up and take care of the Yurungs. But it’s not over yet. 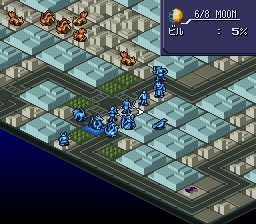 There’s a second set of Yurungs. The movement rate goes down so low through those buildings that it’s hard to reach them, and the foxes make it hard to send flying units up to deal with them. I had an Archangel I had fused in the Remix station, who was a big help. By using my own Yurung I had recruited from a previous stage, I was able to take out the foxes enough to allow the Archangel to go up and defeat the Yurungs, retreating to heal when necessary (the bird could not do it because the foxes have range 2 attack).

Once they’re all taken out the stage is basically over, but that’s a rough one.

After that it’s smooth sailing. The end of this scene has Ogiwara, and depending on your responses to him you’ll be set into the Law, Chaos, or Neutral routes. The responses aren’t very obvious, though. I wanted to do the Law route.

After killing Ogiwara, I headed to 2056 Tokyo to take down the demons that had infiltrated and taken over the government there. In this scene, if you did the 15 turn clear in scene 2, you get a bunch of powerful neutral units — Bishamonten is the best, although he also is somewhat of a secret unit. You have to clear Sideopolis-9 in 15 turns.

The main stage of interest here are the second-to-last and last. The first has you going around a big spiral to the end. 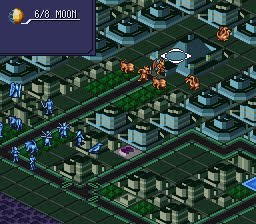 Of course there are generators, long-range units, and fliers. This map takes a long time but with Bishamonten and others it wasn’t too bad. The last stage is interesting. 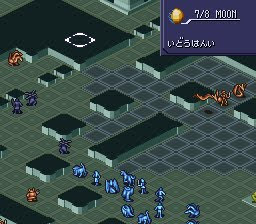 Throughout the stage there are sets of these dragon units. The dragons are so powerful that even my strongest guys could barely hurt them and died in one hit. I imagine if you really knew what you were doing you could bring units here that could deal with them, but the saving grace of the stage is that the dragons do not move unless you’re in their attack range. So the key is just to watch their range and make sure none of your units ever move into that range as you make your way to the top of the screen.

The boss is not difficult.

After this comes the second decision point, where you choose between Light and Dark. It basically deals with why you are going to the two other worlds connected to Earth (Amnesia and Paranoia). I went with Light, so I’ll be getting the most powerful angels.

Scenes 5 and 6 have turn limitations for optional content on almost every stage, so this will be interesting.