The Reign of the Seventh Emperor, Tampuku

I decided to go with another Tactician (actually the next Emperor is a Tactician too, three in a row — probably a bad idea but oh well.) Tampuku’s first idea was to head out to the island of Komulune, where he easily solved a volcano problem by throwing an ice seed into the lava. 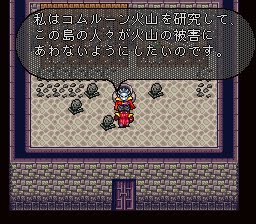 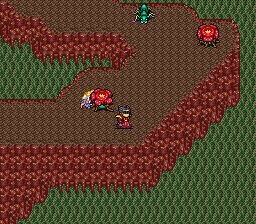 Two short missions followed next; clearing a desert tower to join the desert area to our Empire, and then destroying a big gem in a mine that was causing problems.

Tampuku’s reign came to an end in an interesting way. He saw a beautiful woman dancing at a bar and was determined to seek her out — she turned out to be a mermaid! He went on a quest to collect items to make a potion letting him breathe underwater. It would only work three times, but after three steamy nights with the mermaid, he decided he wanted to stay underwater. 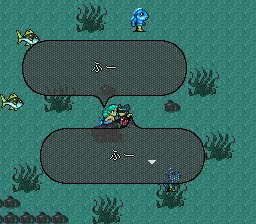 And thus Tampuku was lost.

The Reign of the Eighth Emperor, Koukin

Koukin immediately received the long awaited news that the Privateer quest was open. 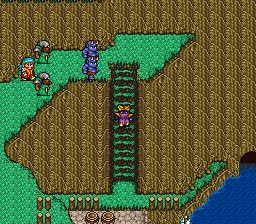 This is a pretty short quest that has us once again dealing with the pirates that we had dealt with before.

After doing this, Koukin seemed strangely suicidal, and went out to fight strong monsters for no purpose — almost as if he knew that the Emperor coming after him would be much better. He quickly died.

The Reign of the Ninth Emperor, Mazeran

Mazeran is a Privateer, and thus I can finally learn the Rapid Stream formation, which lets everyone go first before the monsters. This seems to be generally considered the best formation in the game, with other formations being useful in some specific areas. After getting this the game got considerably easier, at least with respect to the random battles.

I kept building up my magic levels and finally began to research the first few Fusion spells.

Mazeran’s first act was to go after another one of the Heroes, Bokuohn. He is on a Landship, which requires sneaking on to (I went the route where you get the help of a Tactician, otherwise you have to lose all your equipment). Bokuohn himself was not that hard, because his main Marionette technique has no effect if you have the Rapid Stream formation. 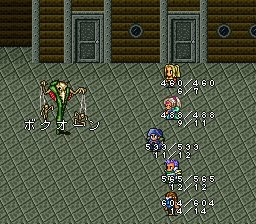 After this I was limited in what I could do:

This left Wagnas. The quest leading to him is long and involves several dungeons, but with Rapid Stream and a steady supply of JP/MP healing items, it wasn’t too bad…until I got to Wagnas himself. 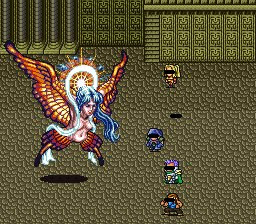 Wagnas uses a move called Psycho Bind that does more damage than the max HP of three of my characters, and leaves the other two below 100 hp. Seeing no chance of victory, I let this Emperor die.

This game is frustrating me in much the same way that RS1 did — it’s just not fun to me to go against these bosses that have these ridiculously powerful attacks. I’m at the point where I have no confidence of being able to do any of the events that are open to me, just because the bosses are punishingly hard and the system is so difficult to figure out. I’m also getting tired of every random battle being a potential game over. I was really hoping not to have to give up on this game like I did RS1, but if I keep having these experiences I think at some point I will have to move on. Or at least take a break and play a SRPG on my other blog.