The Reign of the Second Emperor, Gerard

Now that Kujinshi has been defeated, Gerard decides to add the southern area to his empire. This first involves helping some monks by taking out a creature that is weak to magic. 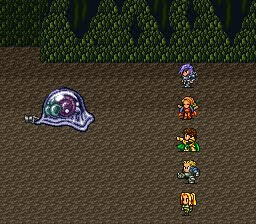 This guy sucks, and it sucks even more once it starts showing up in random encounters. Having the free formation like this helps against a lot of bosses because if they have any horizontal range attacks they won’t hit more than one person. But with regeneration this guy is rough.

On the whole I think this game is too difficult; it’s even harder than RS1, and the game gives you so little information about what everything does (and how to get stronger) that it can be frustrating just to fight random battles. Maybe I’m just a wimp, but I’m using more walkthrough and guide help than I normally do just to figure out the system.

Next up is a fortress that is blocking the way to the next area. There are apparently a number of ways around this part; I just paid the dude to let me in but there’s a more intricate way that works out better in the end (I learned later).

In any case, beating the boss added the next area to my empire! 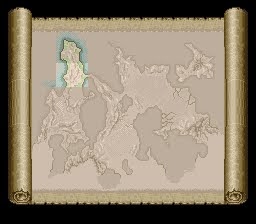 For some reason Gerard decided that was all he wanted to do in his reign, and it was 145 years until the story progresses — I guess probably there were multiple emperors between Gerard and the next one, but I’ll pretend that the witch’s power also gives the emperors longer life.

The Reign of the Third Empress, Onyx

I chose a mage, Onyx, to take the throne next. She immediately decided that building a magic research guild was a great idea. 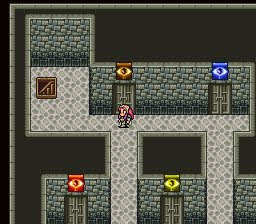 Now I can teach everyone magic, which helps out a lot, especially in raising the magic levels. It’s also nice that now the strategists in the castle can teach any skill that has been learned to any character — that makes it feel like you’re accomplishing things even if everyone dies.

Onyx decided that it was time to add to her empire, and went first to southern lands. This turned out to be quite simple; all she did was clear one mine of enemies and the entire region joined up.

Now Onyx heard also about some troubles in Cumberland to the east, and went there. This was a tough part and I had to kill off one guy who only had 1 LP before I left — if you leave the area before you finish the quest you get a “bad” ending and it affects things later on. I could have let this happen anyway but I decided to try to do it — which ended up being really difficult. I reloaded a lot, but I did manage to save Cumberland in the end, and they joined up.

Onyx was exhausted after this and decided she’d had enough of adventuring. She returned to Avalon to rule over her empire for another century.

The Reign of the Fourth Emperor, Theseus

Next in line is Theseus. He actually went back to finish a quest that his ancestor had started — dealing with pirates. First, to even get a ship to go to the pirate HQ, Theseus had to do the villagers’ request to free a mine from monsters.

The boss exhibited the inconsistent difficulty of this game. When I tried it the first time I got this fight, which slaughtered me: 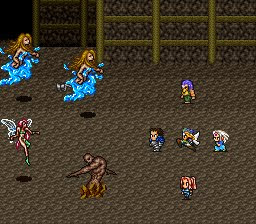 The second time I got this fight: 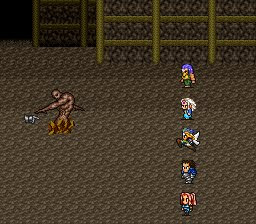 which was no problem. This was a big issue in RS1 as well, where random encounters could range from “mash A and win automatically” to “enemies do more than your max HP in damage, sometimes to more than one unit”. That didn’t start happening in RS1 until much later in the game, here it started happening very early.

Theseus next decided to venture to North Nazelle, which turned out to be a pretty easy quest (just beat a few dungeons and add to the empire).

But the next quest was the end of Theseus’ reign. The Steppe dwellers were having trouble with ants. Theseus made his way down to the bottom of a hole and found this boss, the Hive Queen: And was summarily slaughtered, thus ending his reign.

The Reign of the Fifth Emperor, William

At this point I wasn’t sure what to do — I had probably tried this boss 10 times and not even gotten close. I got some advice from Discord and a Japanese walkthrough to rely on Stun, but this requires having a unit faster than the Queen. Fortunately I had just built the Academy, which can give you a Tactician unit. I believe that once you recruit a unit you can then become that in the next generation, so we move on to the next Emperor.

The Reign of the Sixth Emperor, Shigen

Shigen took his party down to the Queen. At first this didn’t seem to be working but it turns out that armor slows you down. Once i took off Shigen’s armor, he was able to go first. Stun is not 100%, but it worked often enough that she didn’t wipe out my party, even when Shigen got paralyzed for a few rounds.

Once the Queen was defeated, Shigen decided that his single mission was enough for his reign, and 115 years passed before another ruler continued the quest.

On the whole I really think this game is just too difficult, and the system too opaque. But we’ll see if I can beat it.