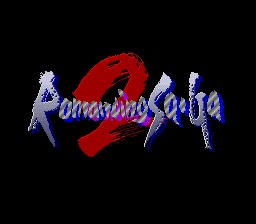 This is the 5th game in Square’s long running SaGa series. The hallmark of the series is to go against standard RPG gameplay; in the Game Boy games this was mostly in the way level ups were handled, but starting with Romancing SaGa, there is also a “free quest” system that introduces a lot of non-linearity to the games. 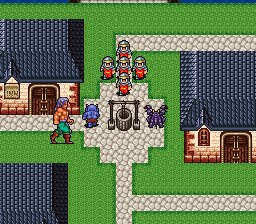 RS1 was one of the first games I played on the blog. Overall I really appreciated the idea behind the game, but I found the implementation of it was poor and ultimately I didn’t like the game much. I reached the point where random enemies were one-shotting my entire party despite them having the best buyable equipment in the game, and I gave up.

I have always heard RS2 described as one of the most punishing, hardest old games from this era, so I’m expecting to possibly get stuck again. I typically don’t make a lot of use of walkthroughs but I at least read the basic gameplay and browsed through the GameFAQs forum to see if I could get any general tips on not getting stuck. We’ll see. 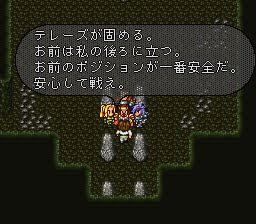 The basic idea behind the game is that the “Seven Legendary Heroes” have returned, but in fact they seem to be evil. You are the Emperor of Avalon, trying to fight against the neighboring kingdoms held by these “heroes”. One peculiar aspect of the game is that you are supposed to die — every character has HP and LP. HP are restored at the end of each battle. If they hit 0, the character loses an LP, and loses an additional LP if any damage is taken beyond that. If the LP hit 0 they are dead. If your Emperor’s LP hits 0 or if the entire party is wiped out, a new Emperor takes the throne and inherits the old Emperor’s skills. The game is intentionally designed so that you will be losing characters and replacing them with new ones.

The game begins with Emperor Leon taking his son Gerard and some other minions on several local quests.  The system is the same “symbol encounter” system as RS1 but the vast improvement is that your formation now only gets messed up if you get attacked from behind, not the sides. Also, they got rid of the system where certain weapons can’t be used in certain positions. It’s also easier to avoid enemies, so all of that is a big improvement. 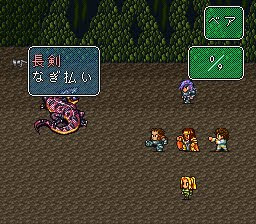 The battle system is much like RS1. You can equip 4 attack items (either weapons or heal/etc items). As you use the weapons you level them up. Unlike RS1 you don’t automatically learn skills on levelling up; instead you have to “spark” them in battle, which seems to be highly random. A huge improvement is that the skills are now associated with a type of weapon rather than individual weapons, so it’s no longer the case that unequipping a weapon forgets all the skills, or that a stronger weapon comes with 0 skills. You get a specific number of “tech points” at the end of a battle but I’m not sure why since there’s no way to check what that number actually means for your characters. I really don’t understand that — is there a reason they can’t show us how many points our characters have? 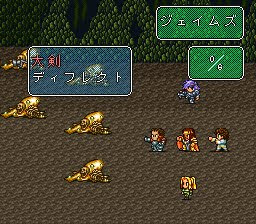 Anyway, the first dungeon is short and simple. Gerard has nothing, but he sits at the back of the formation, making him easy to protect. The enemies have resistances vs. different types of weapons, which takes some testing. One difficulty I had was getting trapped by slimes, which take almost no damage from anything — eventually I found out that Light Ball hurts them, and hits everyone, so they can be taken out.

Chests give you enormous amounts of GP; one of the other interesting things about this game is that your empire has a treasury that gets filled as you go — each battle gives you “taxes” based on how big the empire is. Your personal wallet can only go up to 10,000 gp but the treasury can hold millions; apparently this money can be used for things like researching magic and weapons, and building new parts of your capital city. 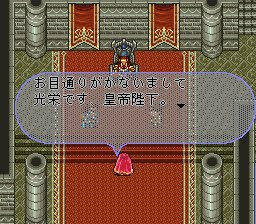 After a few more initial quests, the first of the 7 heroes, Kujinshi, shows up and attacks Avalon, killing Gerard’s brother. Leon leads us out to defeat him, but is himself killed by the same Soul Steal attack. Fortunately a witch helps him transfer his skills to Gerard. 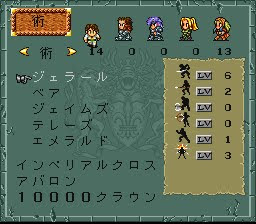 With Gerard, I first went to defeat the goblins that attacked Avalon, and then on to fighting Kujinshi himself. Fortunately Leon figured out a way to dodge the Soul Steal attack before dying, and passed that on to Gerard. I still found Kujinshi fairly difficult because after a while he regenerates HP every round, and he can use some nasty attacks. On the third try I managed to beat him. 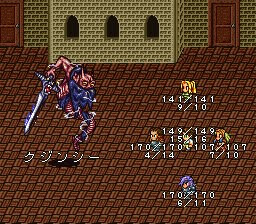 Afterwards Gerard moves on to the next kingdom over to solve its problem.

I wanted to make this first update just to talk generally about the game; I should have more to write about with this because each dungeon isn’t just “Mash A in every battle”.