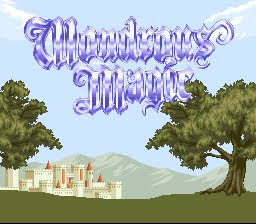 There are three more games to go for 1993 (plus one PC Engine game). This is another minor game with no translation patch.

The story opens with a child, Kurisu, wanting to go find her father and bring him back to her village. He left when she was very little. Her grandfather persuades her to wait until she turns 16 and then she goes with him. Meanwhile there’s a general backstory that the Demon god was defeated by humans with the help of magic, but then she vowed to return in the 100th descendant of one of her minions.

The story sequences have good graphics; I’m always surprised that more RPGs didn’t do things like this, since the quality of the sprite graphics was so limited. 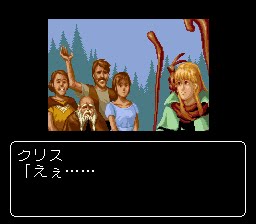 Neither the towns nor world map are explorable, you just choose a location and go. 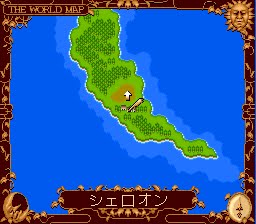 The forest outside the town is the first dungeon area. In the areas you can hold down Y to run, and press B to jump (or hold it down to keep jumping); as far as I know the jumping has no actual effect, it just looks funny if you continuously hold it while moving. 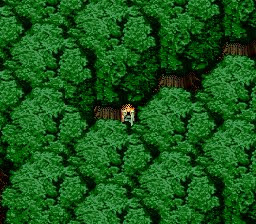 Encounters are random, and the battles take place in real time. 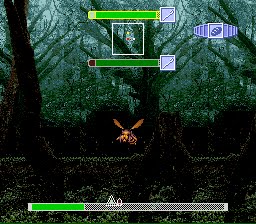 The green bars on top are the HP of Kurisu and Linkel. The middle shows the monsters (you use L and R to switch, sort of like Aretha). The grey box to the right shows the last action the character took, and will turn brown when they get to act. You act with the buttons — Y attacks, holding down A brings up the magic menu when you can then cast with B, and holding down X brings up the equipped items (you can see the bread in the picture) and then B uses it. The large green bar on the bottom is the total HP of the enemies. The system works OK, but I feel like even having played half the game, I’m still not fully used to it.

You can put your characters on AI, which I did — they don’t always make good decisions but I can’t imagine trying to control all four characters in realtime (using select to switch between them).

You can also run away from fights with 100% chance if you have a way you can go that is not blocked by an enemy. Losing all characters results in a game over and you reload from your last save.

Of course given the title of the game and the characters, it’s obvious that magic is a big part of the game, although Kurisu only starts with Heal. There are two types of magic, one that uses your HP, and another that uses MP. You can equip 9 spells at a time for use in battle. The spells level up sometimes when your character levels up.

When you defeat a monster, you get XP and Onyx. There are two forms of currency — Onyx, which the monsters drop, and then Bezera which you get from selling things and from chests. This part of the game confuses me because there seems to be no purpose to the two currencies. At least in the half of the game I’ve played, every shopkeeper accepts both currencies and you can change them freely, and there’s a set 10 bezera = 1 onyx rate. There are even expensive items that change all your bezera to onyx. It makes me wonder if this was something that was intended to work differently but they ran out of development time or changed their minds.

In the next town we meet Shira the magician who teaches Kurisu some magic and then puts her on a test to become a real magician —  recovering a stone from tower. 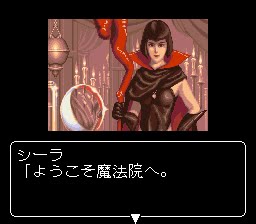 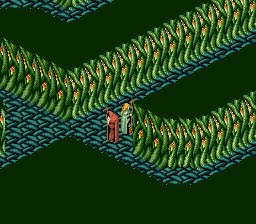 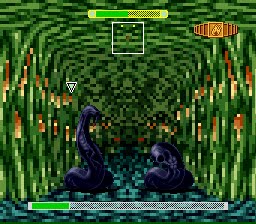 Kurisu has to fight by herself in this dungeon. You often enter dungeons very underpowered, but levelling goes pretty quickly, and I mostly found that simply exploring the dungeons to find the chests and using the escape items/spells when I was too damaged provided enough level gains to proceed. So far I’ve only had to spend a slight amount of time running in circles fighting.

This dungeon itself isn’t hard but once we finish it, a dragon appears when we try to leave the city. 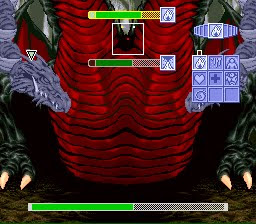 This required some grinding, but at least Linkle joins the fight. Kurisu’s frost magic can freeze enemies, so switching back and forth between the heads and freezing them is a good strategy. Once we return to Shira’s magic school, she’s gone. Linkle suspects that it was actually Shira herself who summoned the dragon to attack them. After questioning the king we move on to the next town to follow Shira. A knight named Soldic joins — he’s 54 years old and Linkle is in his 60s; this might be the oldest RPG party I’ve seen. 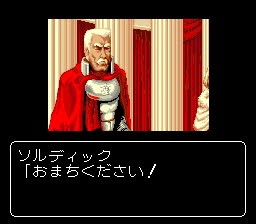 In the next town we encounter the mage Zaifon, who reveals what’s actually going on. It turns out that Kurisu is the 100th descendant of Ivas, the demon god. This is why Shira tried to kill them. Zaifon gives them a chance, though — if they can find three parts of a wand they may be able to stop Ivas from awakening, in which case Zaifon won’t kill Kurisu. We get a fourth party member, a magic knight (who dies a lot); he’s only 16.

Off to find the first staff, which is in this town. The dungeons are increasingly mazelike and confusing.

Afterwards we have to take an underground passage to the Dwarf village. They agree to let us into the place with the next staff piece as long as we defeat a big crab in the desert. 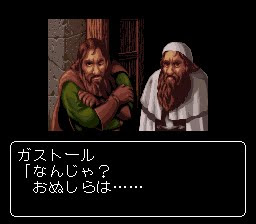 After that, we get the next staff and move on. At Zev, there seems to be a Baron (who might be a vampire) who destroyed a local town and takes sacrificial victims. The first thing we have to do is go to the ruined town, and then take on the castle to beat the Baron. This is where I am now. As I said, it seems to be around halfway through the game, so this isn’t a very long game. The ruined town had tough monsters but I’ve moved up 4-5 levels just exploring the area so hopefully I can get through it next time.