This is the first game in a series that encompasses five main games, and then some spinoff games and later titles (including one currently in development). The series is known for its branching storylines, although that didn’t enter until Der Langrisser (the Super Famicom remake of 2). Since I have not played any of them, I will just introduce the first one. It originally came out for Mega Drive, but I will be playing the PC Engine port. It added CD-quality music, short animated sequences and some voicing, and some gameplay changes. These changes seem to me fairly minor, and I’m not sure what they all are [2022 EDIT: See bottom of this post]. The magic system is apparently more like Langrisser II’s, and each character has a secret class upgrade.

The instruction manual gives the background which is also in an opening cinematic. The titular “Langrisser” is an ancient sword, said to give great powers to whoever wields it. It has caused many wars over the centuries, and is now protected by the Baldia royal family, descendants of great heroes.  But Emperor Digos of Dalsis has decided to attack Baldia in order to acquire the Langrisser, so that he can rule the world (mwahaha).

The next page of the manual introduces most of the characters.

The person at the bottom left is Kurisu, so I now have a mascot for my blogs.

The gameplay is distinct from Fire Emblem, the best precedent MASAYA would have had for development — they seem to have been influenced by other types of strategy games. These are some of the features of the game:

Next up I’ll start stage 1.

EDIT: I forgot to mention that the Mega Drive version of the game was released in English under the title “Warsong”. I don’t know much about how accurate the translation is; I know they changed many of the names (for instance “Chris” is “Mina” and “Jessica” is “Sabra”). This was commonly done in early localizations when the Japanese versions of games would have names that didn’t sound “high fantasy” enough for Americans. Xenic Reverie did a playthrough of Warsong on his blog.

EDIT 2: This is an addition from 2022. When I played this game initially I didn’t spend enough time researching the differences between the Mega Drive and PC Engine versions and the changes are more significant than I initially thought. 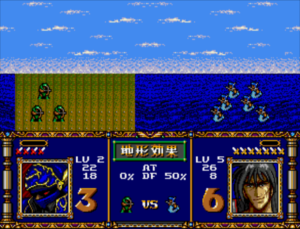 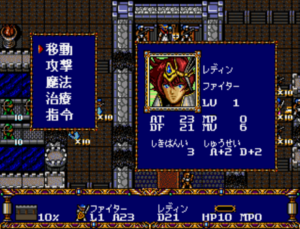 The biggest change that was made is that in the MD version, death of a commander is permanent, but they removed that in the PCE version so that the commander reappears in the next stage. A shop was added between stages (in some stages). There were some changes in the story which I mention in the posts, and the magic system was significantly revised as well. Finally, you can turn off the battle animations in the PCE version. It’s fair to call this Langrisser 1.5. At one point there was a video by Harvester of Eyes that went into detail in this game, but it has been deleted, unfortunately.