Chapter 5 is the last one. I began by sailing around to some of the towers to boost Lufeea’s magic. I finally figured out what the yellow magic spells are — it means your level is not high enough to use them without a chance of failure.

A lot of what happens in this chapter is somewhat aimless; just proceeding to the next town without a clear goal. The main goal of this chapter is that now Lufeea’s sister has been kidnapped as well. This means that the enemies have both the master Monster Maker and the High Priest, which can’t be good. 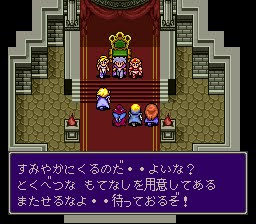 A random dude has captured two of the side characters from the previous chapters, but we manage to save them pretty easily. There’s then a sequence where we need a kayak to access new areas, requiring trips through several more dungeons. They have the usual array of traps, switches, confusing passages, etc. I’m going to skip over this part and resume near the end of the game, crossing a mountain peak. 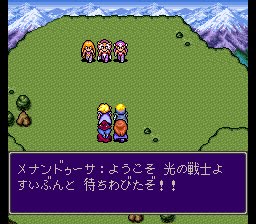 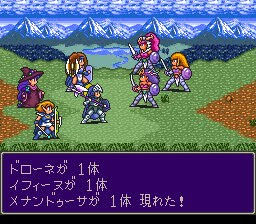 After beating some minions we have to deal with these three warrior women. It’s a bit tricky at first with all of them going for you but if you can beat one it makes it a lot easier. Lufeea’s area effect magic is good because most of them can cause various status effects like confuse and freeze.

After this, there’s a town where we help find a boy who ran out to get his dog. While we’re out of the town, a flying castle appears. 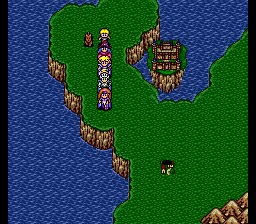 The castle obliterates the town, killing the boy’s mother. 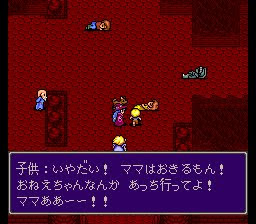 Apparently this was an attempt to kill us, so that’s not good. The castle goes off to the desert.

Now we need to make it into the desert, but it’s too dangerous because of worms, so we need to have a Monster Maker combine some honeys together to make a spice so that we can control the worm (I guess the creators like Dune). 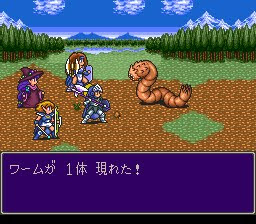 Once the worm is tamed, you can ride it around the desert. There’s a large dungeon that’s optional but gives Lufeea her most powerful spells. I never ended up using them much (partly because I never hit level 48) but going through the dungeon is also worth some extra treasures so I did it. This was one of the most annoying dungeons in terms of encounters because I had to run from almost every one.

A few more miscellaneous things — we save some women from a king’s castle, who captured them at the request of one of the villains, Dioshel. Next up is the Water Dragon Cave, which will lead the way to a castle where we may learn the truth about what’s going on. 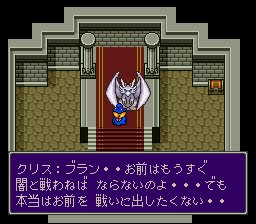 Finally, here’s Kurisu, the character I named at the beginning. She was one of the heroes who defeated evil before, with the help of the white dragon Bran, which magicians and heroes created. It turns out that Lufeea is a reincarnation of Kurisu, and Bran has become the Black Dragon that the enemies are using. Gaiane hopes to use the power of the Black Dragon along with the captured High Priest and Monster Maker to revive the Evil God. We need to stop that, and of course Lufeea now wants to try to save Bran the dragon.

Lufeea also gets access to various shrines that have the best equipment for her — the Kurisu Robe, the Kurisu Hood, etc. This is a strange way to use the named character; I’m not sure I’ve seen another game where it’s not someone you actually control.

We get to the final dungeon with the help of Mito, the dragon that we saved early in the game. He’s now grown enough to get us there. 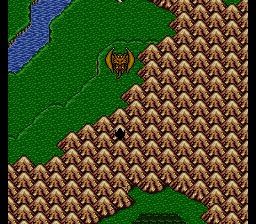 The final dungeon is very long, but there are multiple save points inside it and they provide ways for you to open shortcuts so it’s easy to leave. What’s also nice is that there are few encounters that you have to run away from so I was able to gain a fair amount of levels. Dioshel has been turned into a crow and trapped in a jail for some reason, but we save her on our way to the final battle. 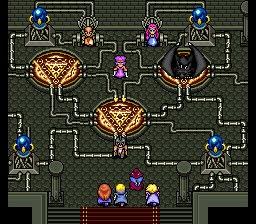 Gaiane is in the final room, hoping to revive the Evil God. First we fight one of her warrior minions who isn’t hard, and then the Black Dragon. He isn’t as hard as I thought he would be. Now it’s the final fight. Gaiane fuses with the Black Dragon to reveal the final boss. 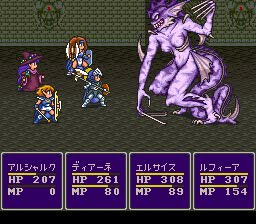 The head will revive the arms, and the arms protect the head. However, they can be frozen, so having Lufeea cast Death Freeze helps, as does the Dark Ball spell which stops all magic for a while. Once the arms and head are defeated, the torso is left. 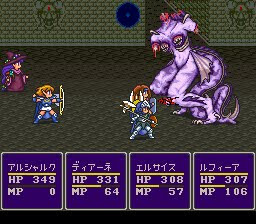 The torso casts nasty area effect spells. I thought I might lose, but by casting Dark Ball every chance I got and using items to heal, I was able to eventually defeat it — at one point I was down to only one character with 70 HP left, so it was close.

After this, the Black Dragon turns back into Bran, and he disappears to turn back into the earth and air he was created from. The closing scene is mostly wordless as everyone goes back to their lives. 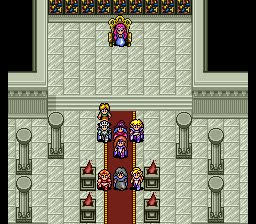 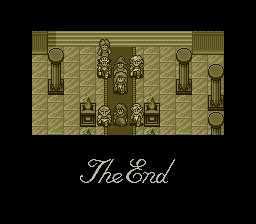 This game is very flawed but not the worst I’ve played, and I’ll discuss all of this more in the wrap-up post next week.