I think this game would be very hard to play on a console, especially if you tried without the dungeon maps. Even with the battle setting on the highest speed the battles don’t go that quickly, and the encounter rate is extremely high, especially compared with the long dungeons.

The dungeons are relatively well designed, I think. They have a lot of traps, switches, alternate paths, and such, so that it’s not just wandering through a featureless dungeon finding treasure boxes. But I can also sympathize with the criticism of this game’s difficulty — one thing you have to do in pretty much every dungeon is figure out which encounters will kill you if you try to fight them. If you try to fight enemies that cast charm or sleep, or have area effect magic/attacks, you’re running the risk of a game over even if you enter the fight at full strength. Even if the risk is minor, it’s not worth it given that a game over sends you back to your last save, and the dungeons are so long. Fortunately running away is relatively easy, but I have gotten game overs even when I tried to run.

Chapter 3 introduces another character, princess Diane. Her brother is sick, and she thinks it’s because of the growing power of the monsters, and sets out to find the problem. Her father forces her to go take a magician along with her. Also she can pick up an “underling” Robber who can find traps and also fight in battle. 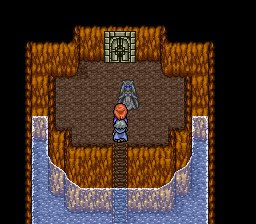 The magician is training in a forest, and his master sets up a trial to see if we’re really ready to go out adventuring. We pass. The magician characters are interesting because their regular attacks shoot magic out of their wands that does a decent amount of damage at a distance; this makes up somewhat for their low MP. The rest of the chapter is pretty short. Diane has to save a statue maker who can make a goddess statue to ensure safe travel over the seas. Along the way she meets up with the heroes from the previous chapter.

Chapter 4 begins with Lufeea, who seems like the main character, but the person I named at the beginning is Kurisu, so I don’t know what’s going on there. Chapter 4 is quite long, and overall the time that elapses before you get this main character is much longer than in Dragon Quest IV. The main goal here is for Lufeea to travel around to various magicians and learn their magical powers as we still try to discover what’s going on with the increase in monster activity. 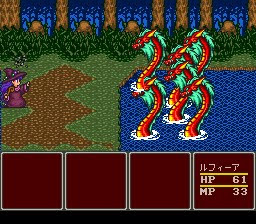 It also seems like she’s a prophecied person because everyone knows who she is; destined to become the most powerful magician in the world. Her sister is a high priest. After leaving her village she quickly meets up with the three characters from the former chapters, and this is the party for a long time (maybe the rest of the game?)  The first goal is Bolgard tower, where a mage puts Lufeea on a trial through various traps and tricks in his tower, and then teaches her magic.

After that, she heads off to meet Daruuan, but the shadowy villains of the game have captured him. As he’s being captured he throws Solomon’s Ring to Lufeea; with this we can now get monsters on our side. It’s similar to Megami Tensei (I think one of the MT developers worked on this game), but I haven’t used it much yet. Getting a Goblin or Robber is helpful because they can detect and disarm traps. But one of the complaints I’ve seen about this game is that the system is implemented in a way that makes it hard to use the monsters — you have to completely sub out your party for the monsters (temporarily) and they can only be revived at monster maker huts which aren’t necessarily in convenient locations.

The majority of this chapter is just finding the towers with the magicians in it, with no real developing story. A few important things do happen — we save the daughter of the King of Fetoland by going into her dream, and Fetoland’s brother has stolen a ring from the Elves that we return.

Near the end of the chapter we have to go to a volcano to stop the villains from doing some cliched ceremony, and also to stop the volcano from blocking access to other continents. This is the hardest dungeon so far because most of the encounters are game over chances. So it’s a lot of fleeing. 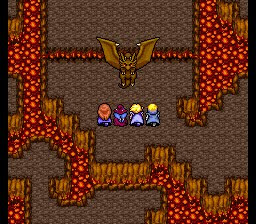 Eventually we meet up with a Black Dragon and one of the antagonists, Diosheryl. This is a hard fight but we just have to survive for 6 turns before an earthquake shakes the area. We get saved by the dragon from chapter 2, and the chapter ends with us being able to explore the southern continent.

I’m still not sure what’s up with that character I named at the beginning of the game. It almost makes me wonder if I hit the wrong button and went with the default name (Lufeea?) but I’m pretty sure that in the dream world there was a mention of Kurisu. We’ll see.