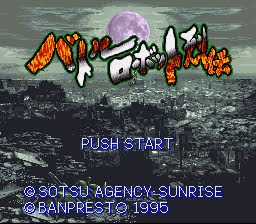 I’m a big fan of the Super Robot Wars series, and I had always heard about Battle Robot Retsuden. It was made by Winkysoft, who was responsible for all the early SRW games, and so I had the feeling that this was a SRW-like game with only real robots. Unfortunately this is not the case.

It does share with SRW the mixing of various series, so that you have characters from Gundam, Dunbine, Xabungle, and L-Gaim. Xabungle would not appear in a SRW game until 2001’s Alpha Gaiden, so this is quite an early entry for the series. All the other series had appeared before. The basic story is that there’s a world (I think a parallel universe or something like that) where two empires are at war, but the mechs they produce suck. So they use a technology called Duplication to copy mechs and pilots from other worlds. These are called Branch Warriors. The Gelster Empire has used this forbidden technology to invade other lands, and the Nord Empire calls their own Branch Warriors to defend themselves. The Nord Empire just happens to have all the hero mechs, and the Gelster has all the villain mechs. There are a bunch of original characters as well, but they seem to only be in the story sequences and never actually fight.

The game begins with the Amuro copy in the Nu Gundam. The Nord people use these crystals which they call “apples” to awaken Amuro. You get additional apples from defeating enemies that you can use to raise the characters’ levels, but there’s a limit to how high they can be raised in each chapter.

You can also get things from the enemies to upgrade the mechs, although the quantity is quite limited in the game. Finally, there are items you can equip to certain mechs (like the L Gaim and Walker Machine) that increase their defense, give them beam barriers, and such. 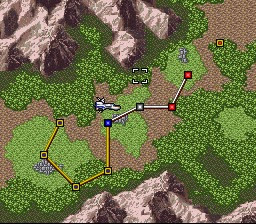 Each chapter has a map like the one above (usually there are more places than this). Enemies will appear in the various spots. They will either stay there until you reach them, or move towards you. You can make teams of mechs to send out, although you have to leave at least one back with the ship. The ship can’t be controlled. Once an enemy encounters an away party or the ship, a combat begins. 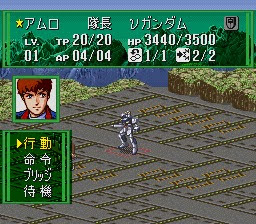 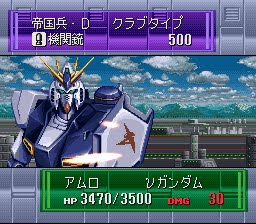 The battle areas are based on hex maps. Each unit has a certain number of move actions and a certain number of attack actions per round. The attack actions have very specific ranges so it can sometimes be hard to position your guy in the right place. Some actions cannot be done twice in the round, and you can also spend one point on a shield for that round (for mechs that have it). The battle sequences use large, detailed figures that were certainly a selling point of the game.

Unfortunately, all of this is ruined by one horrible decision made by the designers: you can only control one person in battle (the squad leader). Everyone else moves off horribly stupid AI. This means that in battles, the majority of your time is spent watching the computer units fight each other. Sometimes you can barely reach the battle before it ends.

In a RPG or SRPG, it’s not necessarily a fatal flaw to have some AI-controlled party members. But to be good, the AI control has to be designed into the gameplay. For instance, Ogre Battle does it well enough that I still think it’s a good system. For this game, it feels like a game where you should have control over everyone but they just don’t let you do it.

In addition, the maps often require you to just sit there and wait for the enemies to come to you, because if you try to go out on your own some units will reach the ship and you’ll get a game over.

I made it to chapter 4 (out of 11) but I just couldn’t take it anymore. The story seems interesting, but it’s just not worth struggling through this poorly designed system that you barely have any control over. I’ll close this post with a bunch of random screenshots from the game. 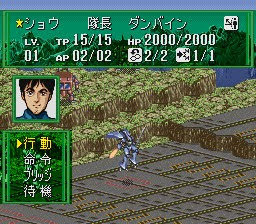 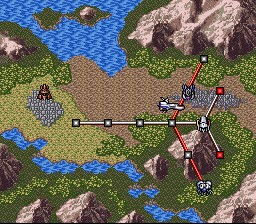 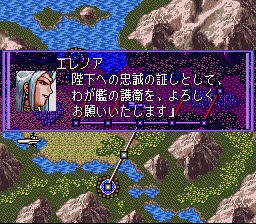 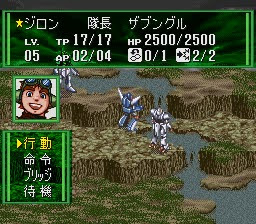 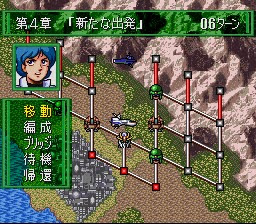