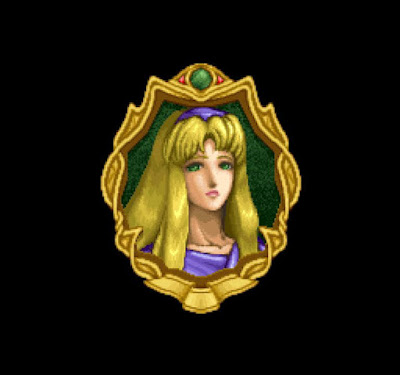 This game is an interesting mix of real time strategy and RPG that I had a lot of fun with. I’m not sure if this qualifies as an SRPG for me or not.

Kure Software released a number of these RTS/RPG games, starting with Silver Ghost in 1988, then First Queen later in 1988, and then sequels in 1990, 1993, and 1994. The original 1988 First Queen was ported to the Super Famicom in 1994, and that’s what we’re playing here. As is often the case with these Japanese computer RPGs, they don’t really play like anything else out there — the game clearly draws inspiration from the “run into enemies” action RPGs like Ys, Hydlide, and Bokosuka Wars. The last one in particular makes me wonder if Kure Soft wanted this to be a faster-paced, more expansive version of Bokosuka Wars. 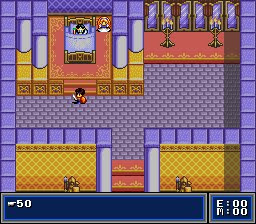 The box and other art was done by Yoshitaka Amano, who is most famous for doing Square art (Final Fantasy and Front Mission, for instance).

The story is fairly simple, as you might expect from a game of this age. Olnic Castle has been taken over by Catherine, who is now trying to conquer the whole land. The main character is Richmond, who starts out with a small group of soldiers setting out to beat back the forces of Olnic and defeat Catherine. There are only one or two story developments and no big surprises.

You begin with your one force, and a large map covered with enemies. 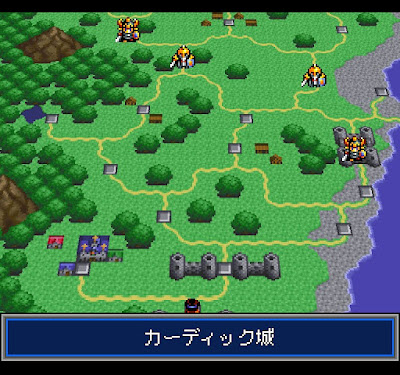 If you scroll up to the top you can see Olnic Castle, the final destination. Each of the grey squares is a location that can either be a town/castle, or an overland place. Most of these places have monsters in them, and if one of those enemy sprites is there you have to fight the monsters in addition to the enemies. Some of the enemies stay where they are, and others will move downwards. New enemies will also spawn during the game. I’m not sure what happens if you let an enemy get all the way down to Gardic Castle at the bottom; I never tried to find out.

In the first town to the left you can pick up an additional commander, Jane. There are ten or so commanders you can recruit during the game (sometimes you have to make choices between opposing factions). Each commander can have around 15 troops. 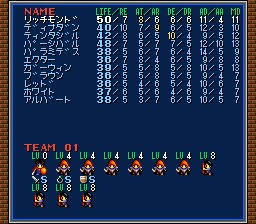 Each troop can carry one item. When they reach a certain level (usually 10 or 15) some of them can class change in town.

When you get into a battle, it’s a big free for all. 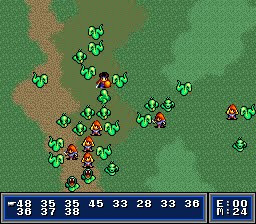 You can take control of any of the characters, and you just run into the monsters. Hitting or being hit will often result in losing act time, but the system is a bit opaque. You have to watch the HP of the troops at the bottom, and if they get low enough (green or red) you can take control of that character and try to have them retreat from the battle.

Once you’re done, you can move on, or Camp, which regenerates the monsters but also lets you save your game or switch to a different commander. 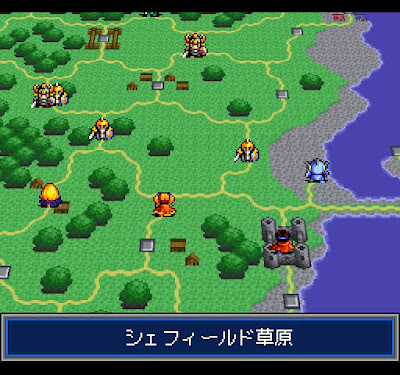 The first part of the game is basically moving everyone forward, clearing out locations and getting new commanders. I never found that it was worth using more than 3 commanders — I eventually settled on Richmond (who is necessary for the game), Isolde (the Amazon chieftess), and Roy (the elf). I don’t know if there’s really a “best” commander; you can probably train up any of them to be decent. 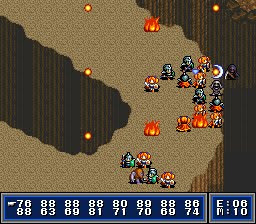 Eventually you get magic arrows and rings that can make all kinds of things happen in the battle. It’s always hard to tell when an enemy is actually getting hit or damaged, or how effective you are in combat. It’s especially tricky when there are archers or flying enemies because they can be hard to approach or hit, and tend to run away.

There aren’t that many tasks that you actually have to do in the game. You have to revive Richmond’s home town so that they’ll build a bridge over a cavern, and meet a witch who will dispel Catherine’s confusion spell for you. I think I may have missed another thing or two, but the majority of what you do in the game is optional, mostly just to get extra items (like the Excalibur for Richmond) or additional characters or commanders. I skipped an entire castle that would have let me upgrade priests because I wasn’t using that commander. 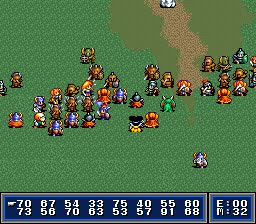 Once you reach the next to last place there’s a massive battle where most of your commanders and troops join the fight and there are probably 100-130 enemies, though they come in waves. This feels really epic, and you end up losing a lot of characters (death is permanent in this game, including commanders). Basically I think it’s the most important to watch Richmond’s troops, since he’s the only one that can enter the final area, although you can pause before then and transfer any troops from another commander to Richmond.

The final area is the castle, which has a number of areas, but eventually Richmond finds Catherine. 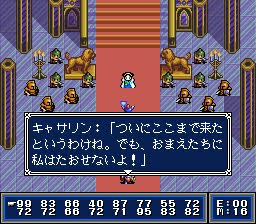 She goes down pretty easily, but then there are three gargoyles 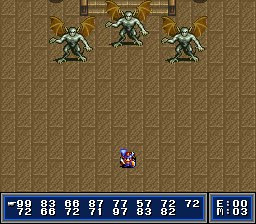 And then the final Manticore boss. There is no saving in castles so you have to do this all in one go, which can be pretty tense if you start losing characters. 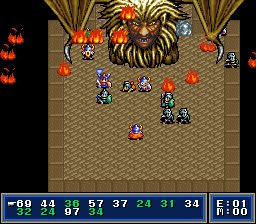 I found it really hard to tell where to go to hurt the final boss, and it was hard to tell if I was doing any damage, but then I won. I enjoyed this game quite a bit despite being kind of primitive and with a semi-obscure system. It’s pretty fast moving, and there’s a lot of tension when you’re overpowered and trying to keep your troops alive while positioning everyone to fight the enemies. You can’t always just rush in do whatever you want. And while you’re advancing forward, you also have to make sure that you have a couple of strong commanders in the middle part of the map to deal with new enemies that come from the castles or enemy areas.

First Queen II and III were not ported to consoles, but IV came out for the Playstation in 1996. I have it on my SRPG list so I’ll eventually do it on the other blog.