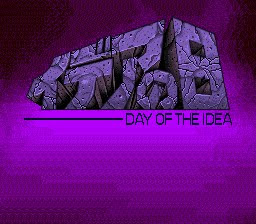 This game is something of a spiritual sequel to Maka Maka. That game was a buggy mess full of non-stop nonsense and bizarre gags. This game does not have the bugs of Maka Maka, and the nonsense is confined mostly to the enemy designs (who are done by the same gag manga writer as MM). The graphics are not as good, though.

The game opens with the main character Kurisu. His parents were killed and he was captured and tortured to bring out the psychic abilities he showed when he was 4. They bring in his dog and kill the dog to make him angry, and he blows up the room — Dr. Po escapes, however. They claim this is being done for “Idea-sama”.

Kurisu then escapes the lab. This game has a stupid feature where you can dash with the B button, but it lowers your health as you dash. And if anyone is dead or in low health you can’t do it. I think they did this because in the dungeons the encounters are not random, and it makes it harder to run away from the monsters. But it’s annoying. 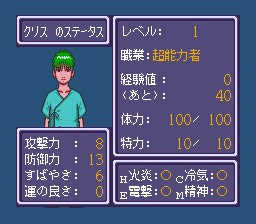 The battle system is fairly standard, except for the way weapons are done. You don’t equip them. Instead, there is just an “item” command where you can choose a weapon, a shield (for defense), or any other item (curing, etc.) you have. 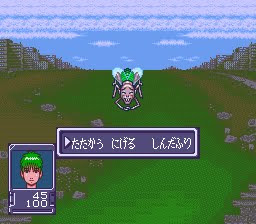 I found a town fairly quickly, but without much money I couldn’t buy much. The whole shopping and equipment system is a complete nightmare, one of the worst parts of the game. I think they intended for it to be a highlight, but I hate equipping the characters in this game. 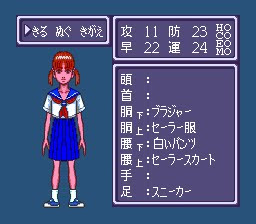 You have 8 equipment slots which are actually reflected in the picture to the left of the character. I think they intended this to be an interesting part of the game, but you can’t see the stats of anything in this screen. When you buy stuff, there’s no way to see if it’s better or worse than what you have, or what equipment slot it goes in (which isn’t always obvious). You can’t see who can equip what. The stores are divided into 3 or 4 floors each selling different things, and characters only have 18 item slots.  Seriously, getting to a new town and seeing the store makes me want to quit playing for the day.

Kurisu finds out that his data was sent to a research station on Easter Island, which is the goal of the first half of the game. But until then it’s basically a normal old RPG style of traveling to the next town, fixing some problem there, and moving on. Along the way I picked up the first “pet”, animal characters that you can’t control. After bringing a doctor to a stable to restore a horse’s health, the game switches over to Rinko (the character above).

She plays second fiddle to her sister who’s better than her at everything. 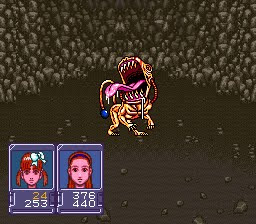 She soon discovers that the mayor had her parents killed because her father discovered a gold mine and the mayor wanted it. Rinko kills the Gold Eater inside the mine before finding this out, which helps out the mayor. Her sister dies in the fight against the gold eater and then the mayor captures her and decides to kill her in a supervillain way. 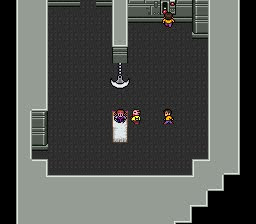 The game switches back to Kurisu now, who has dreamed about Rinko with his ESP and goes off to save her, riding his new horse. When Kurisu reaches the tower, there’s a cutscene that shows he only has 7 minutes to reach Rinko. These timed parts are the only place where the “dash does damage” actually has a big effect, but even so this isn’t that hard. He makes it up to the top and saves Rinko, who joins the party.

There’s a hut nearby with a brain that can’t be hurt, so we move on. There’s a little town that claims to be bullied by the large Heian city. But Heian city has its own problems — a closed dam has caused a lack of water and they’re dying of dehydration because the key is guarded by a monster. 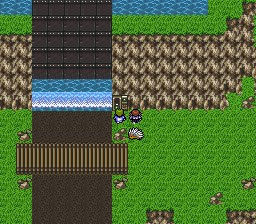 We unlock the gate and guess what — the Heian people were just tricking us into opening the gate to flood out the little town. Kurisu gets so mad he learns a new power that fries everyone’s brain in Heian, but we can now use that to beat the brain back in that house for some nice treasures. And the game now switches over to Raigan, a sumo wrestler. 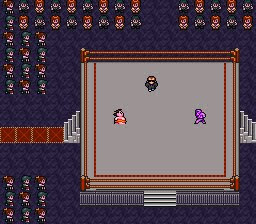 This guy is my favorite character because he can’t equip anything, so you don’t have to bother with the shops. He’s also really strong. He gets kicked out of his sumo training for fighting in this pro wrestling ring, especially since he lost. The first task is to bulk up by killing a bear for its meat and then making a big pot of chanko (Sumo wrestler food), which gives Raigan a huge boost to his stats. Then, he has to save the master’s daughter who has been kidnapped and forced to work in the pro wrestling arena. But it turns out this is a trap; all the fighters are locked in prison and forced to fight. Raigan beats the first few opponents but now has to fight Bigfoot, who will surely defeat him. The story switches back to Kurisu and Rinko who head out to save Raigan.

They arrive and throw themselves into the ring just as Raigan is getting his butt kicked against Bigfoot. But after winning, we all just get thrown into jail. Nice job. Next up we head off to get a ship, which involves another series of fetch quests. Along the way, there’s a medium Mikoto who joins the party. She could be found in the first town healing “possession” (a really annoying status effect). Now she’ll join the party so her power can be used outside that town. 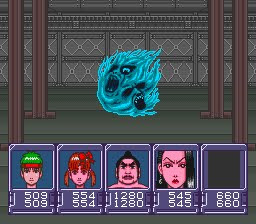 Also when you go back to Rinko’s hometown, Mikoto can exorcise the ghosts in the abandoned building which turn out to be her parents. They show her the way to a gold nugget in the cave, which sells for a nice amount.

For the boat we have to find out why the captain and all his crew got sick — it’s because in a drunken state they throw a cenotaph into the ocean that was commemorating the local dead. By making a new one and enshrining it, the angry ghosts leave and the captain is able to sail towards Easter Island. 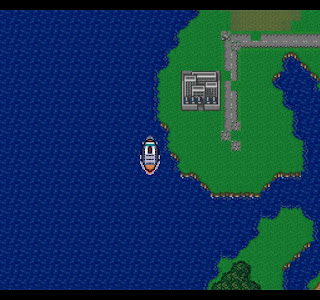 Unfortunately in true RPG fashion, the ship gets attacked and destroyed. Kurisu and company have to escape the ship on a raft, which requires them to ditch a lot of heavy equipment (including 9 gold nuggets found on the sinking ship). But eventually we float down to Mexico. Here they get arrested as thieves, and the game switches over to the next party member, the thief Judd. He makes money stealing so he can help an orphanage, but his wife doesn’t like it. First you have to do a big heist of a diamond from the museum, which requires making it through the sewer defenses to sneak in. 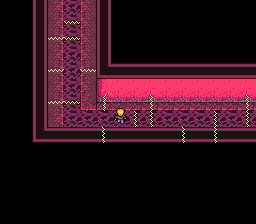 But he’s captured on the way out. He makes a daring escape, but then is captured again and thrown into the cell next to the other party members. He helps them escape. At this point there’s a small sidequest; go back to Fukushima and you can save the deposit store’s daughter. He gives you a pager that you can use to use the deposit store at any time — this is how you switch party members (by depositing them or taking them out) and also items. 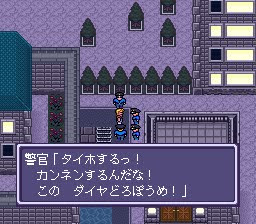 Meanwhile Judd is by his dying wife, who got tricked by people; she had hoped to sell the diamond for a huge sum that would be enough to save the orphanage and make them rich, but it was a lie. She dies, and Judd goes running off to Manhattan Tower.

At Manhattan Tower we face Demok, a disciple of Idea-sama who is working on some nefarious plan, but he quickly runs away, heading down to Easter Island on a helicopter. 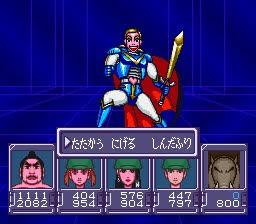 Judd now joins. He has the special power of being able to open all the locked chests and doors, so there’s some backtracking here to get some treasures from previous dungeons. This includes being able to read Kurisu’s mom’s diary; she and his father were apparently aware of Idea’s plans and were killed as a result. The party then continues on to find a way to get to Easter Island. In a cave there’s a frog that puts them all to sleep, as well as a spirit that possesses Mikoto. We switch over to the next party member, Dr. Po. 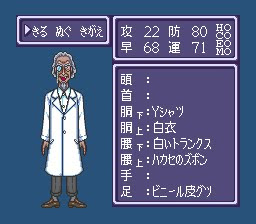 He’s the guy who was helping torture Kurisu at the beginning, and also sunk the ship we were on earlier to steal uranium to make a nuclear gun. He’s joined with the Idea cult with their plan to destroy the world; Po wants to do it as revenge for his son being killed. His son was working on a virus that escape into the world and caused all the monster mutations and such, and he thinks that his son was killed because of that. So all humans deserve to die. Great party member!

After some fetch quests Po arrives at the cell where the rest of the party members are. The spirit Mikoto was possessed with is Po’s son, who tells him that it was actually Idea who released the virus into the world. The people Po thought killed him were actually trying to protect him when Demok showed up and murdered him. So Po decides to go against Idea and join the party.

Po tells the party that in addition to the Easter Island research facility, there’s also one undersea, in the south pole area. But first we need a helicopter to make it to Easter Island, and Po runs ahead on his own to go there. 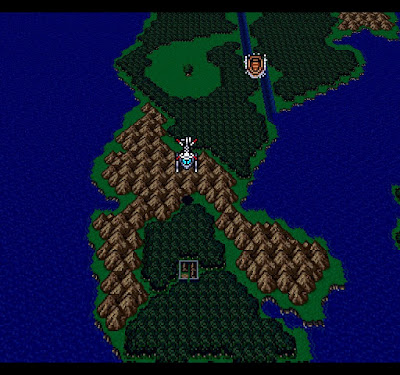 A few fetch quests later and we’ve got the helicopter and a nice Mode 7 view. There are random encounters that result in this: 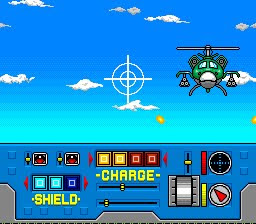 You just have to move the sight left and right and hit A to fire the laser.

At the research facility we rescue Po, destroy the atomic gun, and kill Demok. That solves the first part of the quest, and now it’s off to the south pole.

This game is OK, but the interface issues really hurt it a lot. This game would be a pretty decent RPG if it weren’t for that, but it’s really a chore to play.