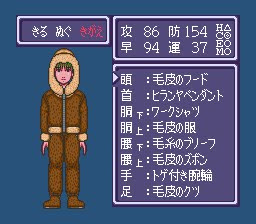 In theory this is an interesting idea. In practice it’s a nightmare. I complained about the horrendous item/equip interface in the first post, and it’s places like this where you really see it at its worst. Your inventory space is far too limited to carry around cold-weather, warm-weather, and regular gear. Switching between them takes forever. You would have to use the storage location to swap items. Not only this, but there’s no real indication of what qualifies as warm-weather gear so you just have to guess. To make it worse, there’s one dungeon that combines both hot and cold on different floors. I mostly just ignored this system and took the damage, healing up. Raigan is useful in the warm areas because he doesn’t wear anything. The next major goal is to find a submarine so we can get to the underground base of Idea. The subquest here is to stop “Freddy”, who is invading people’s dreams. 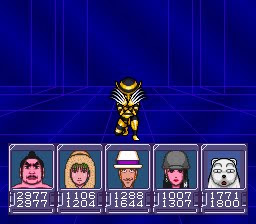 Once we find where he is, he throws the heroes into a dream world. This dream world has the hardest and most annoying boss in the game. 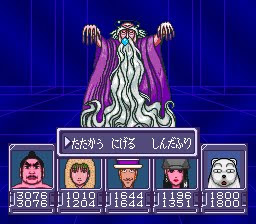 He has a very powerful all-hit attack that also stuns and confuses you, and he can put everyone to sleep (which is not broken by attacks). The game gives you two items you can use (just in the dream world) to fully recover everyone’s HP as many times as you want. Despite that I could not beat this boss legitimately. I lost 15-20 times before I broke down and used save states. Even using save states (not every single round) I had to load the states 10-15 times to win! Maybe I was underleveled, but the status effects are so devastating combined with his huge damage attack that sometimes I would get a game over having done one attack.

Once he’s done we get an item that neutralizes Freddy, a sleeping captain Ahab gives us his spear, which allows defeating a shark to reach the next area. This area is based on Romeo and Juliet; you have to reunite two towns so they can work together on a drill we need to reach new areas. The R&J story is predictable but the poison is fake so everyone is happy. 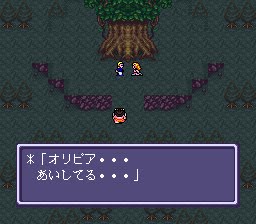 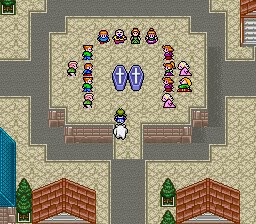 There’s also a hidden character TomTom that you can get here. He’s a great character, partly because he doesn’t equip anything so you don’t have to bother with that. But he also has great powers that he can use for free, like an all-hit freeze spell. His HP is not very high, though.

Eventually we get both the drill vehicle and the ability to pick it up with the helicopter, so it’s time to go to the underground world (we’re still working to get the submarine!). Under there are the usual stereotypical primitive people. This is where the “hot” areas are; Raigan and Tomtom are great here. TomTom’s cold breath will take out most of the monsters in one turn, and his speed is very high so he usually goes first. 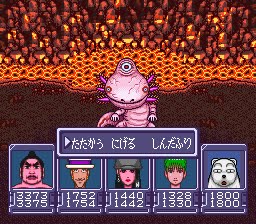 Getting the submarine requires beating this powerful monster that can only be hurt by an Ice Sword. I went through the cave to get it only to find that you need Seal Skin Gloves to do it, so I had to go all the way out, get them, and then head back in to the sword. But finally after all this fetch questing and vehicle upgrades, we manage to blow the submarine out of underground and now we can use it. 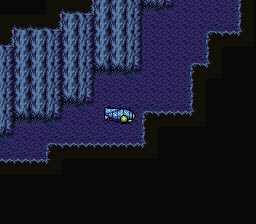 The first thing we have to do is investigate several sunken ships and a dungeon to find missiles to open Idea’s lair. Once this is accomplished we’re finally in the end stage of the game. 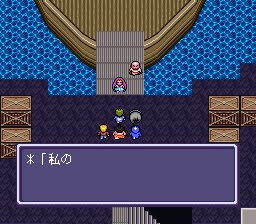 The party meets Idea as she’s heading onto the Ark. Her plan is to flood the world and restock it with specially selected children that she’ll use to make an ideal race. When Kurisu challenges her, saying there are good people out there, she responds that we’re not those good people. We rob houses and kill things for experience and gold. But it’s not necessary to fight Idea now because she does the usual supervillain move of leaving us in a place where we’re sure to die and then cackling as she runs off. Of course we escape as the lab blows up.

Now we’re back in the sub and I see the Ark as well as a whirlpool. We can’t get into the ark right now. The whirlpool takes me to a future dystopia where Idea’s plan has occurred, but the repopulation of the world didn’t work; instead it’s a bunch of mutants and monsters. 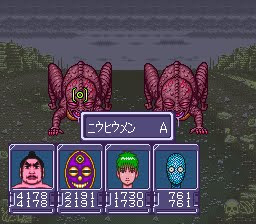 The future world has the ruined Ark. You need Mikoto and Dr. Po for this part (of course they don’t tell you, and you can’t use the Pocket Bell to summon the storage shop unless you go back to the present world). One thing we find here is the device to open the hatch, and another is writings and recordings left behind by Idea. It sounds like even her chosen people didn’t behave the way she wanted them to so she went insane and eventually died inside the Ark.

At this point we can get some of the best equipment in the game. I collected all 8 pieces of matching girl equipment. 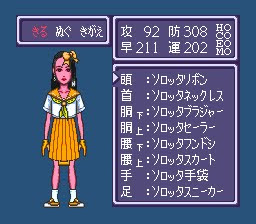 And then there’s a set of Atlantis equipment for Kurisu. 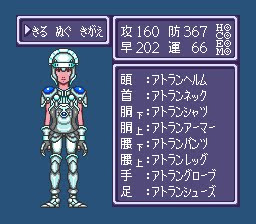 There’s also a drowned village under the sea where we find Idea’s diary; it turns out that Idea is Kurisu’s mother and that his “parents” were just researchers in Idea’s lab. At some point most of the world also gets drowned, leaving islands with the major cities on them. I didn’t notice exactly when this happened, though.

With the hatch opener we can get into the Ark to save the children, and fight some of the underlings of Idea. First up is Beads, who has powerful precognition that blocks any attempt to fight him. 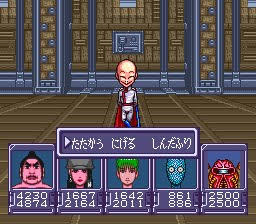 What you’re supposed to do is intentionally confuse yourselves and then rely on that to beat him. You can also use Kurisu’s “anger” power with a full gauge to instantly kill him, although the dialogue still indicates you used the confusion strategy.

Now the children are safe, but we rush to confront Idea. She refuses to listen to Kurisu and attacks. 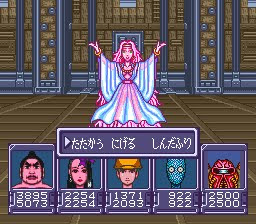 But after just a bit she runs away, and we can see that she’s being possessed by some kind of malevolent spirit. Now it’s time to return the children to their towns, which gives us scuba diving suits and an upgraded sub that we need to reach the final cave for the last boss.

The scuba suits mean you can’t use Tomtom or Raigan for this part. You have 60 minutes to get through the cave, but I did it in 8 minutes without a map, so you hardly need that much time. After that there’s the final cave part, which has an Inn and resting place so I could switch back in Tomtom and Raigan. 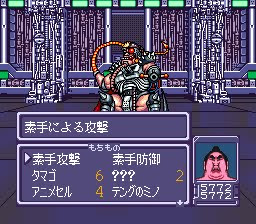 The final dungeon has a bunch of warp areas and three bosses. Tomtom’s Roulette Beam is very helpful because it can do big damage, but also take away the bosses’ turn with Sleep or Paralyze. I thought this first boss Equal was the hardest one. He had the most HP and did the most damage. Next up is Justy, who was much easier. 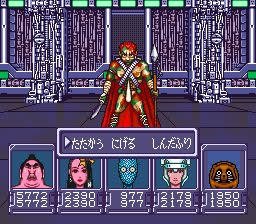 Then we reach the final boss, Idea’s wrath, who has left Idea’s body to fight. First she tells us to get in the cave or she’ll kill Idea and Kurisu’s dad. 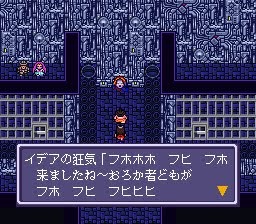 If you pick “yes” you go in the cave but the parents die anyway, and you end up in the same place as if you pick “no”. 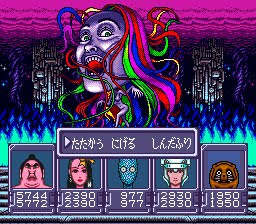 Idea has some nasty status effects, but I didn’t find her that hard. I used one Anger of Kurisu and then a Roulette Beam that did huge damage, and she was gone. We shut off the machine that was going to destroy the world and then leave the cave.

A few weeks later, Kurisu goes around to check on how everyone is doing. Tomtom has been healed by Dr. Po back into a real person. Mikoto is back to working as a medium. Raigan is a sumo wrestler again. Jado has bought the orphanage. And Rinko is now the most popular girl in school. But she has another message — she’s pregnant with Kurisu’s child(!?!?!?!?!?!?) 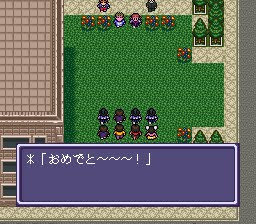 So the game ends with their wedding. That’s…not what I expected. 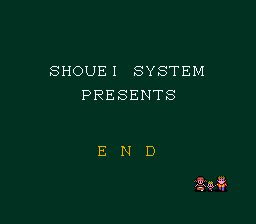 This is another game that has a lot of potential, but is ruined by bad design choices — in this case the item interface. I’m not sure you can understand how bad it is and how much it affects the game until you try playing it. The story is not bad, although marred by an excess of fetch quests that stop all story development. There are some unfair boss fights, but not too many. The battle system manages to have enough in it that it’s not completely bog-standard.

Next up is Shin Megami Tensei II, which should be better!