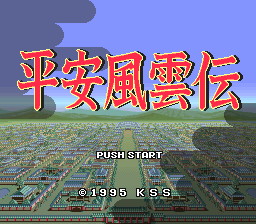 The Heian period is not a common setting for manga or video games — in general things were much more focused on the genteel life of the court rather than adventures or battles. But there are stories and legends that can be drawn on. This game is set in 1000, around the time of the Tale of Genji and other courtly romance fiction, and while the story uses some of the court figures, it’s more about what was going on outside of the capital (you can’t enter the palace at any point). 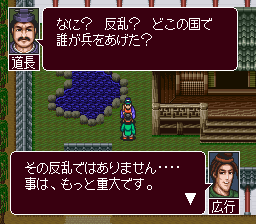 The back story is that Emperor Kazan in 984 had twins with Fujiwara no Shishi, who died in childbirth. One of the twins died, and the other was banished to Kumano to become our main character (in actual history, Shishi died in her 8th month of pregnancy). 16 years later, the Yamawaro rebel against the Heian goverment — this game depicts the Yamawaro as an ethnic minority (later portrayed as demons in legends). Fujiwara no Michinaga, who was the real power in the capital at this time, calls on the Onmyoji Abe no Seimei to help protect the capital, and his disciple Douma attempts to revive the soul of Taira no Masakado, who rebelled against the capital 60 years ago. 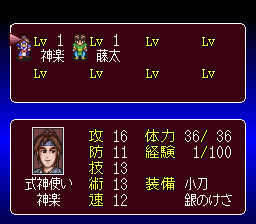 All of these people are historical figures (except the main character, Kagura). There are other historical figures in the game — the warrior Minamoto no Raiko and the poet Semimaru, for instance. Although most of the enemies and people you get on your team are fictional. It is impressive how many historical figures they were able to include, though.

The development of the story itself is not that surprising; Kagura ends up having to fight both the Yamawaro and Douma and his followers trying to revive Masakado. There are a few twists here and there but overall the story is not exceptionally detailed. 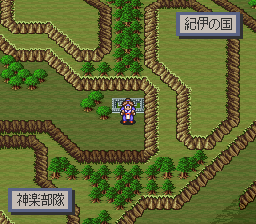 The game basically divides into two parts. The first half you’re dealing with the lands to the west of Kyoto, the second half they’re on the right. The game has a map system where you see all the enemies on the map — the fixed encounters are squares, and from some of those locations, additional enemies will come out (as circles) and start marching towards the capital. If any enemy reaches the capital, you lose. I was initially worried about this mechanic because it seems like you could save yourself into a position where you would have to start over, but it’s not a big deal. The game does give you multiple teams, but even this was hardly necessary. The enemies move so slowly that except for one battle I never used anyone but my main team. It may also be the case that if you defeat the square enemy than the circles were coming from, the circles that are already out freeze in place (I’m not sure of this). 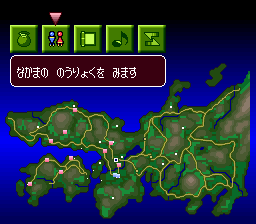 So basically the game involves visiting all the square enemies and defeating them; eventually new square enemies will pop up, until you finish the game. There are two parts (near the end of the game) where you have to go to certain places to fight battles that don’t have a square; they’re indicated by the dialogue so it’s not very hard to figure out. There are also random encounters with bandits if you’re not on a road.

Once you get into a battle, it’s typically your party vs 8 enemies (there may have been some early battles that didn’t have the full 8); your party can go up to 8 people. The turn order is determined by speed, and you can see the order by exiting from the current unit’s turn. The battle system is fairly standard, with units able to move, attack, use items, or special abilities. There are a few additions that I didn’t make much use of — you can summon a shikigami which I consistently forgot about, and some things having to do with units next to each other supporting or doing stat increases (I didn’t know about this until I beat the game).

Your units have a number of different classes. Some of them are restricted to a small number of units — the Shikigami User is only your main character, and the Ise Priestess is only Uzuki.Other classes like Warrior and Omyoji have more. Within the classes different people will have different arrangements of abilities. One disappointment is that nobody ever learns new skills, other than the main character being able to summon more types of shikigami. It may seem odd that I never used this ability but Kagura is so powerful that even though I completely forgot about this she was very useful. Levelling up raises their stats, and gives them more uses of each technique. 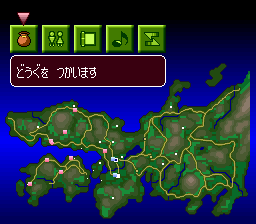 My main party was as follows:

The balance on the whole seems off. Some characters have incredibly powerful attacks and others can’t do much. There are a large number of characters though, including many optional ones. I also found the balance of the individual battles was off as well. The enemies often have heal-all and attack-all spells, plus they summon these shikigami that are ridiculously powerful in the early game. So I often found myself having to do rushes with Kagura and Semimaru’s attack all spells just to get the healers and leader down before they would overwhelm me — the permanent death system makes this even more necessary. All battles end when the leader is destroyed. The game is not especially difficult as a whole, but I did often feel very constrained in my strategy choices by this lack of balance. 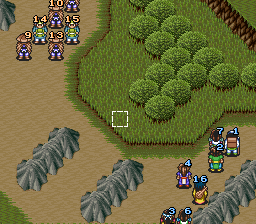 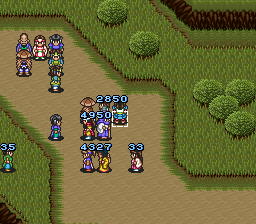 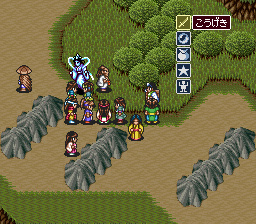 When you hit someone, it moves them a square, usually back but sometimes in one direction or the other. There’s also some kind of zone of control system where you can’t pass by enemies. So there is more to the fighting than just moving forward and attacking; you often have to take advantage of pushing enemies aside to reach the boss.

Between battles HP fully recovers, and you can rest in houses to recover technique and spell uses. This doesn’t take any time (as far as the enemies moving on the map) so you can do it pretty freely, with the exception of the final three battle sequence which have to be done in one go.

There is no money in the game. Instead you get items and equipment from fights — the equipment is not a major part of the game. You can trade it with merchants for healing items, but I hardly used these either. 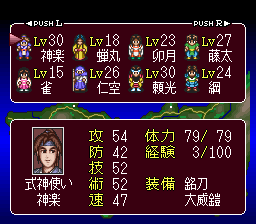 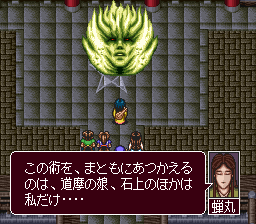 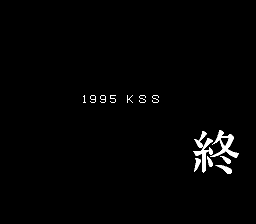 Overall this is a decent game. The battles are quick and even if you lose you can just try again immediately since you save before each battle. The story involves a lot of historical stuff and mythology, although it could have been a little deeper. One tip — to get the “true ending” you have to have Semimaru and Uzuki (the Ise Priestess) in the final battle and they both have to survive. I believe that you automatically get Semimaru. Uzuki is optional but not very difficult to find.