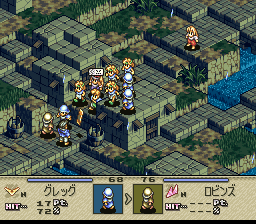 As I said in the first post, this game is innovative in many ways. The storyline is strong — in its complexity and depth it’s far beyond any other SRPG that has come before it. I don’t know if this game in particular inspired other designers, but going forward there are a number of other games that incorporate the kind of complicated political situations and warring empires that we see in TO.

This also is the first game to really incorporate 3D maps, with height playing a significant role in the game. The game also offers a lot of replayability, with two Chapter 2s and three Chapter 3s. You can also recruit a wide variety of monsters and special characters, meaning you can play the game through with totally different parties.

That being said, I think there are some significant flaws in the game. The first one is how unbalanced the different classes are, and the flawed implementation of the armor system. The second is that being just a few levels below the enemy makes it very hard to fight them — they can often do enormous damage to you and do very little in return. This means you have to spend a lot of time in training equalizing levels, and if you fall too far behind the story bosses you may even have to grind up.

As I’ve mentioned in the Fire Emblem posts, I also do not like permanent death. I think maybe it’s not as bad in this game as others because you can persuade enemies to your team, but it’s annoying when enemies gang up on someone and kill them in just a few hits.

Ultimately I think this game is worth playing, although I would recommend either the Playstation version or just use save states on the Super Famicom version to simulate how things would be in the PSX version (where you can save in the middle of a map).

The designers would go on to implement many of the same kind of ideas in Final Fantasy Tactics, which has some of the flaws and good points of this game.