I have now finished TO so I will try to cover the rest of the game in this post.

I took the Law route, which means I will be doing chapter 2L and 3L. The Neutral chapter 3 is only available from the Chaos route, and then the routes converge in chapter 4. The Law route involves sticking with the Walstan side despite their slaughter of the innocent people in Baramus.

The old LUCT site has a translation of the entire story if you want to see it in detail.

The first few battles of this chapter aren’t bad as we head towards Ashton, but the Ashton battle is rough. This is the only time in the game I had to grind levels beyond just equalizing everyone’s level. The enemy leader, Aloser, is an archer and is quite strong. She could kill a number of my guys from full HP with 100% chance from the front, and even if she couldn’t, the other enemies could pick them off. I found that in general, being more than 2 levels below the enemy leader made it quite difficult. 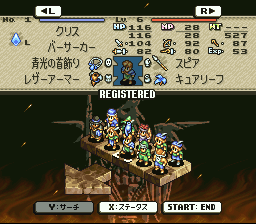 Kurisu is a berserker there, which was a mistake — I forgot that his alignment would not qualify him for Terror Knight. By chapter 4 I had changed him to a Ninja and then a Swordmaster. He was never one of the stars of the team, but with a spear he managed to do OK. He also was my main caster of Petrobreath. It took me a long time to realize how good this spell is, but if you can cast it over an area you can take multiple enemies out of the battle completely with one spell. This helps also with collecting the stat cards and healing in multi-part battles.

The next tricky battle is against Wynoa; she has a fire orb and uses it first round to do big damage to a lot of people. So it’s time for the Cure Leafs.

After Duke Ronway’s feint attempt fails, Leonard decides to have Kurisu assassinate Ronway and assume command of the Walstans. He agrees, and we head off to Amorika, but face Vice and Aloser again on the way. This is another tough fight because they both have bows and can team up on guys.

Then it’s on to Amorika, where we fight a big battle inside. 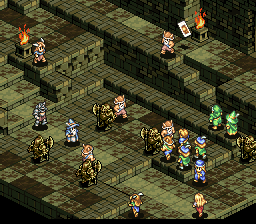 The main challenge of pretty much the rest of the game is just preventing guys from getting ganged up on and killed. I had to try a bunch of different approaches to this until I was finally able to take out the knight.

Then we have a one-on-one with Leonard; his actual plan was to have Kurisu kill Ronway, then he would kill Kurisu to unify the Walstans after killing Ronway’s assassin. It’s Vice and Kurisu vs. Leonard. 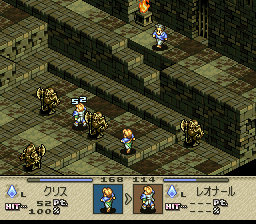 Vice does most of the damage here, but I think I gave Kurisu a bow also so that he could keep out of Leonard’s way. With Leonard dead, Kurisu gains control of the Walstan army. The next battle is annoying. 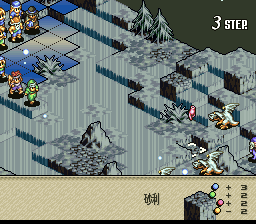 The terrain and weather really benefit the enemies a lot, particularly the dragons. It’s a slog to beat them all. I then picked up Jenounes at the next castle, who turned out to be an excellent person all the way to the end. He got a Firedrake sword which made him very effective against dragons.

The rest of the chapter was fairly smooth, especially once I got Vice and the other new units who were quite good. This was essentially my party for the rest of the game, except that I replaced the cleric with Kachua once I got her: 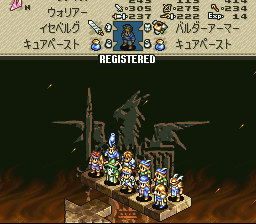 I had some trouble with this fight near the end of chapter 3: The enemies don’t move until you cross the river at the base, and as usual they can team up on someone and kill them pretty easily. So you have to play it cautiously (and if you realize how broken Petrobreath is it’s probably easier than it was for me).

The most bullshit fight in this chapter, and possibly the game, is the 1-on-1 vs Oz near the end of 3L. I don’t like it when games spring this kind of battle on you, particularly as the second battle in a sequence where you can’t save. Oz can kill Kurisu in two hits which makes it very hard to survive here — in the end I had to do a lot of class changes and different combinations until I beat him (I don’t remember the exact setup). 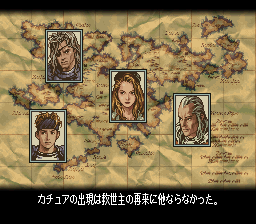 Chapter 4! Kachua is now a queen and we just have the Lodis people and Branta left. From here to the end, the majority of battles were overall the same — the basic tactics involved just waiting for the enemies to come, going mostly for the leader, and equalizing levels between battles. By the end of the game I had developed by team enough that I could do more than just beat the leader.

The Barbas fight was tough until I could get him to move into the right spot where I could gang up on him. The next fight against Lancelot was quite difficult. I honestly can’t see playing this on a real console where you can’t save at all during or between battles. Lancelot did an enormous amount of damage to my guys and it was just a chess game to make sure that he and the Warp Knights could not kill anyone. 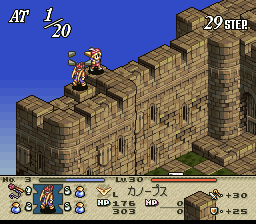 Branta at the end is not too bad because he’s a Bishop, so his defense is quite low. As long as you can avoid the Terror Knights killing anyone, just getting a few units into his range should finish him off (although those Angel Knights he summons are annoying). 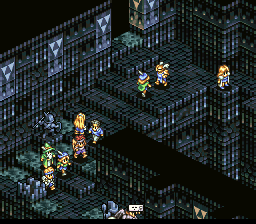 I ran into trouble when the Dragon with a Wind Orb showed up. I had to do a lot of maneuvering before I could survive that battle; in the end I had to take a death of my Wizard, but he had the Death Ring so he became a Lich. I gave Fudo to Jenounes since he had high DEX and good defense. 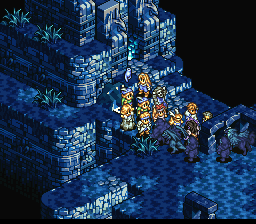 The final battle is rough. Dolgare has ridiculous defense and comes with a lot of scary dudes. Fudo is really the key here since it ignores defense — two hits from Jenounes was enough to kill him along with one bowshot. Canopus died in the final battle, which was sad since he had been one of my most important characters for the whole game.

Overall I have mixed feelings about this game but I will sum them up in another post.