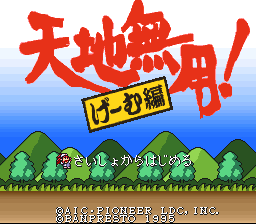 Tenchi Muyo is an old school anime (at least in the English world); I remember it being one of the small number of things available in English when I first started watching anime, although I never actually saw it. It’s a basic “harem” anime where this normal high school student gets surrounded by a bunch of women. In this case most of them are aliens, Galaxy Police, or other such characters. The first OVA series came out in 1992 and by the time this game was released, there were a total of 2 OVA series and a 26 episode anime. The series is actually still going on, with a new OVA series this year.

The game doesn’t make any attempt to set the background up for the series or introduce the characters (although probably there was some explanation in the instruction manual). That being said I didn’t find it difficult to follow at all. The character types are pretty broadly conceived and easy to understand, and the plot itself doesn’t seem to rely much on previous knowledge of the series. 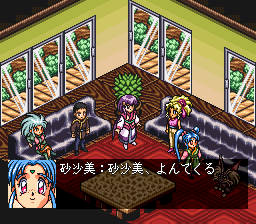 Definitely the best part of the game is the graphics and presentation. All of the figures are large and detailed, with unique animations for each attack, animations for getting hit, and various animations and picture graphics during the story sequence. Each character also has voicing during their moves; it’s very limited but adds to the appeal. 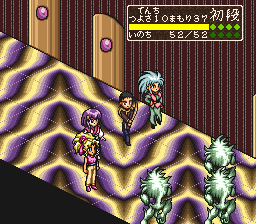 The game, however, is lacking in a lot of areas. It is quite short and easy, and can be finished in just a couple of days.  This is fine for 2020 when most people playing it probably aren’t paying for it (or if you are, it’s $7 on ebay or $25 with box and manual). But I can imagine that being frustrating for the original audience who paid 10,000 yen. I would rather play a short, easy game that has design flaws than a long frustrating one. 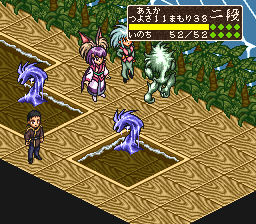 Each character has 8 levels. The level ups are based entirely on number of monsters defeated, but there’s no way to check what the current number is. But this is kind of strange that beating the  earliest monsters in the game provides the same “experience” as the final monsters.

Each level grants a new move for the character. This is nice, and I appreciate when characters grow throughout the game and learn new powers. The powers use the “kiai” stat, which you see as the green diamonds to the right of the picture above. You recover some kiai each turn and the stronger moves use it. If you have full kiai, most characters can Morph into another form, which grants different powers, and the Morph lasts until the kiai reaches 0. This aspect of the gameplay is good.

However, there is no equipment at all, and only 4 characters per battle. The characters movement is very slow, and seems to be a Tactics Ogre system where turns are based on speed and if you don’t move or act, your turn comes up more quickly. 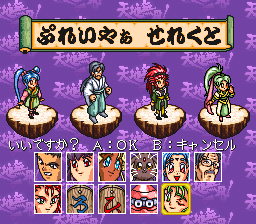 There are 12 total characters. Some are optional or (slightly) hidden. The differences between the characters are pretty stark, with some characters being nearly useless. The party I have above (Sasami, Katsuhito, Washu, and Shitsuki) are pretty clearly the best party, although Tenchi could be subbed in for Katsuhito without too much trouble. 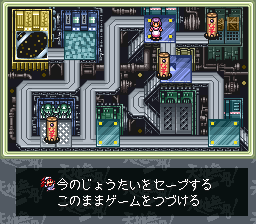 There is a world map (three of them) and you can choose where you go next, and you can go back and forth between places to level up. Typical battles are against 4-6 enemies with some reinforcements slowly coming in as you play. 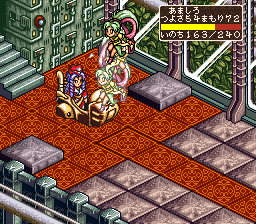 The basic story involves this woman Shizuki coming in and capturing Sasami, and then we have to go rescue her. But then it leads into another fight against the purple haired person above, and you go to the moon to defeat her. The plot is decent enough but nothing all that special. 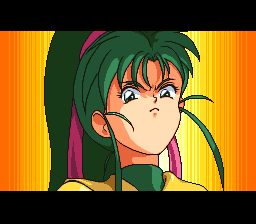 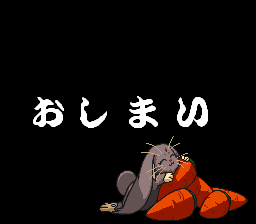 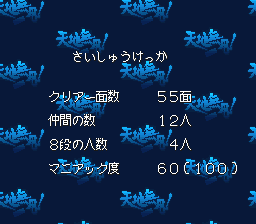 This game is nothing exceptional, but it’s fine for a casual play. It can be finished in less than 8 hours. If you’re a fan of Tenchi Muyo! it’s definitely worth a try, but even if you aren’t, it’s a perfectly playable game.