The Glory of Heracles III: Silence of the Gods (ヘラクレスの栄光ＩＩＩ：神々の沈黙） 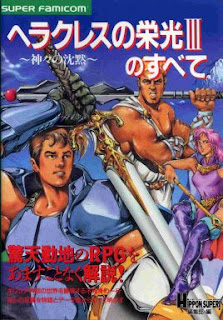 The next game on my list is the third game in a five-game series. Two of them were released for the Famicom — Shen Nung at Inconsolable has played both the first and second games in fan translations. The third and fourth games came out on the Super Famicom. There is a fan translation for this one; I don’t believe IV has gotten one yet. Finally, a fifth game came out for the DS 18 years later, and was released officially in English. The series was published by Data East, a venerable gaming company that stopped making games in 1999 and went out of business a few years later. Some of the employees started Idea Factory, which continues to produce loli/boob games with Compile Heart.
These games have been described as “Dragon Quest in ancient Greece.” The game is very reminiscent of DQ, but that’s not necessarily a bad thing. Even the music is a little bit like DQ.

We begin with our hero waking up in a village, with no memory of anything but his name. After talking to people for a bit a huge pit opens up, and the hero falls down it but survives — he’s immortal! All the townspeople are also revealed to be fairies, and our hero Kurisu sets out to see if he can find out who he is and what happened to him. When you rest, you enter a strange dreamland with people, but you can’t get much information out of them.

Nine fairies join you and become your first companion. They can help you out in battle but leave immediately when you go to the first town.

The battle system is recognizable. The main early feature is that there is a row system, and only certain weapons can hit enemies in other rows. In order to use different weapons you need to learn proficiency from people in the various towns. Magic also sort of follows this line — by entering springs in temples you gain the power of that god or goddess and then can learn magic of a certain type. The first temple you encounter is to Demeter, and you learn cure magic. You start out just with Pau, the weakest heal spell, but as you level you can learn more powerful magic. Unfortunately you have to return to the temple with each new character to let them get the magic; it’s hard to tell at this point how annoying that will be.

You start off on the island of Crete, and have to get into Knossos to find a ship to sail to the mainland. Unfortunately they won’t let you in, so you have to do a fairly bizarre sequence to make this happen. You go to the nearby town of Gortyn. You’ll find an old couple who has lost their daughter, and you have to steal her clothes and dress up in them so that a slaver will hire you to go to Knossos with him! The grandfather does say he wishes someone would steal the clothes so that they weren’t always faced with the memories, but even so…

Here’s the image from the later mobile phone release of the hero dressed up as a woman:

Arriving at Knossos, you get shut in with a bunch of other women who are apparently not slaves, but future sacrifices, They’re waiting for a strong man to come and release them, so you rip off your clothes and reveal the true nature. 9 slaves then join your party as you escape in an underground passage.

You also free an old man along the way who “rewards” you by having the guards in the town not kill you. But how will you get the ship? It’s the innkeeper’s ship. There’s a show every day in town where a guy jumps from a tower and lives. The innkeeper gives you the ship if you’ll put on the show for him. Once you do, you meet up with the other jumper who is also an immortal, and someone you saw in the dream world. Reion joins! But not for long, because on the ship you get attacked by a huge fish, who eats you. 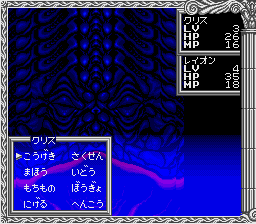 At the end of this short dungeon you and Reion both get blown to different places, with Reion telling you to meet up in Athens. You wash up in Laconia, where Spartan soldiers are bothering the town. They’re bummed because their leader died. So here comes another bizarre sequence: you have to become the Spartan leader by first sneaking into their inn dressed like a girl, and then jumping off a cliff to prove your worth. After that, you get another set of 9 soldiers, and it’s off to Sparta, where monsters have been making a mess of the town.

The soldiers are fun; they start with 255 HP but as they take damage, individual soldiers can die and that will reduce their attack. They can cover your damage, but also call for reinforcements which will give them back some HP and attack. At the bottom of a nearby cave you fight a boss, who was actually somewhat difficult. Aglio has really powerful attacks and a lot of HP. I was down to very low MP and had used a lot of items by the time I finally beat him.

Afterwards the soldiers immediately go back to Sparta, leaving you alone in the dungeon. There’s a chest with a dungeon exit item in the back, but I got killed in the first encounter; like Dragon Quest, you go back to the last save spot with half your gold but with the rest of your progress intact, so I just went on from there.

Now it’s off to Athens!

7 thoughts on “SFC Game 5 – The Glory of Heracles III”