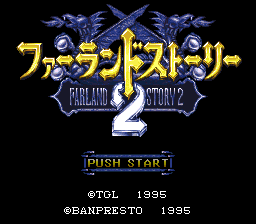 This is the second (and last) Farland Story game for the SFC. Since it came out within a year of the first one it’s probably not a surprise that there’s not much advance on the previous. Unlike the previous game which was a remake of several PC games, this is a completely original game following off the first one, taking place maybe 20 years later.
I skipped the first one because it was so bland and boring — this game is also bland and boring but I guess it was just slightly better enough for me to play it. They did make a few advances on the gameplay of the first one. By equipping different items you can do some different attacks — some people can heal or attack, others have a range or close attack. They also abandoned the hex map of the first game. But ultimately this game still isn’t very good.
The main problem is the balance. Throughout most of the game, enemies can kill your characters in 1-2 hits. This isn’t a big problem because any healer can bring them back to life (you can heal again to immediately use them, or wait a turn and they’ll be at full HP). But if Riad dies it’s game over. So he’s largely unusable. I also found that characters who fell behind in levels became useless as well.
The maps are also way too large, and you spend a good deal of your time just moving your units one by one at very low movement rates until you encounter the enemies. I just recommend skipping this game.

The main character Riad is the son of the Emperor, but he stays away from the castle hunting, with no interest in war. But his father wants to use his childhood friend Sarena to do the secret “Dance of Destruction”, which can destroy kingdoms. Riad instead takes her and runs away, with the Emperor sending troops after.

This is actually a tough starting stage; the enemies hit hard and you only have two dudes. I got one game over and thought I was going to die against the boss but managed to squeak it out. There are shops but they didn’t seem to sell anything useful.

Why can’t you turn off the battle animations? This is 1995! 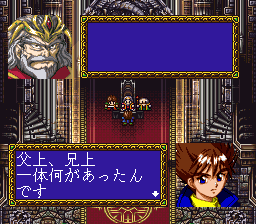 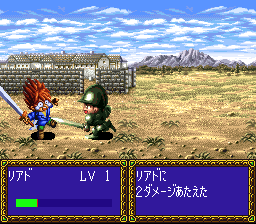 Riad reaches a port city that is supposed to be free of war; nobody fights there because it would disrupt trade. But the Emperor is so desperate to stop Riad that he attacks. Riad is now joined by a wolfman friend Klaus, as well as a demon Varacana (also a friend). The enemies are basically the same strength as stage 1 so this is much easier.

Afterwards, they head to Felsaria, where King Ark (from the first game) rules. They hope to find shelter there and a place to hide. 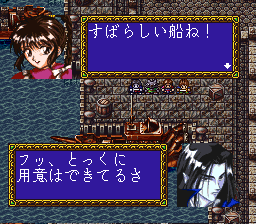 The Emperor’s men have reached Felsaria before Riad, and they spread rumors that Riad had attacked and burned villages there. Kai, a knight, refuses to believe this and is also branded a traitor. The captain of the ship we took also joins us (Altaba). The bad stuff seems to be done by Barnasas, a demon.

I realized on this level that if you equip Sarena with the Heal Ring you can have her heal party members on her turn instead of attack. This game also has the same shop system as last time, where you can buy things if you start your turn on a shop. It does not seem to have the treasure chests/spots, though.

Kai agrees to escort us to King Ark, but on the way we come across Eria, who Kai knows, being pursued by enemies, so time to save her. Kai’s dad Docati is actually leading the enemy troops, but once we beat him, Sarena’s dance makes him realize what’s going on.

Barnasas is here, but I don’t think he can be beaten; he’s way above our levels and runs away after one attack. 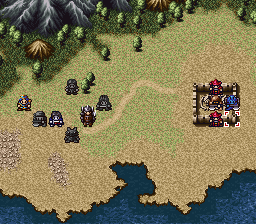 King Ark believes our story of course, and goes on his own to meet with Riad’s father, which doesn’t seem like a good idea. Meanwhile a fake Riad attacks (he’s the one who had been besmirching Riad’s name). Ark’s son Shifil joins, as well as Docati from the last stage and a wizard Neiful.

There are enemies in various places here so I split up my party. Fake Riad was moving too quickly towards my forces so I just had Varacard buy all the equipment that the whole party will need, and I will distribute it next stage. I also have a bunch of items I’ve gotten from killing things that I need to do this too — of course this is all the way back to Fire Emblem 1 level of interface where you can’t manage items except individually in battle. 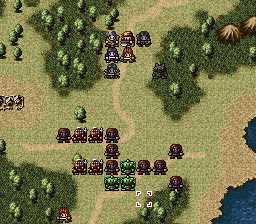 Ark has gone off but not returned, and now Imperial soldiers have arrived at Felsaria. Riad decides to try to get back to Felsaria; unfortunately Ark took their magic ship so they’ll have to find their own way. After beating the Imperial troops, they learn from one of them that Ark is probably shut up in a fortress, and the Imperial army is trying to convince a white dragon to work with them to attack Felsaria. So that’s our next goal.

This map has a secret shop that sells “lucky” weapons. I’m not sure what they do, but I bought a lucky sword to find out.

Barnasas, the demon, has convinced the white dragon that we’re the enemies. His father pledged to King Ark 15 years ago to protect Felsaria. But when Rikido (the white dragon) smells Shifil, he recognizes him as Ark’s son and realizes that Barnasas tricked him. So now we have a dragon on the team, and continue to try to find a ship.

The ship turns out to be Silent Moon, the magic ship that got us here in the first place. So we’re really not stealing anything. Along the way we pick up Doris, a summoner. This game has one advance on FS1 in that characters do have multiple moves — Doris, the dragon, Sarena, and a few others. But it’s done through a cumbersome manner. You have to “equip” either the tail or the breath attack. You can freely change weapons but it seems like they tried to graft a multiple attack system onto the FS1 system and this was the only way they could implement it. 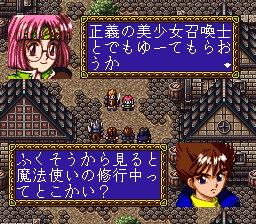 On their sea voyage, the heroes are attacked by a fleet led by Weiss, a sharkman who studied under the same sword teacher as Riad. But now the teacher is a general in the Imperial army who has ordered Weiss to defeat Riad. When you attack Weiss the first time, he does something to blow everyone off the ship. 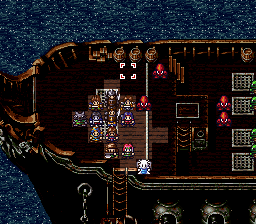 Everyone wakes up in the land where Zoldin rules; he’s the sword teacher of Riad and Weiss. Some of the party members are gone, and Riad has lost his memory. But he regains it for no reason at the end of the stage, and Zoldin leaves after a single battle. 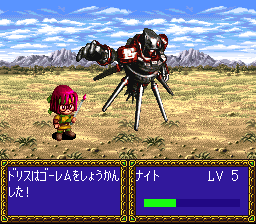 Shifil reappears here, but other than that we just learn that the Empire is attacking Troy to the east, so that’s our next destination. The General here was the strongest boss yet, but as long as Riad doesn’t get killed it’s not very hard.

King Paris fears the Empire and so isn’t interested in cooperating with Riad. But when Riad uses a Trojan Haniwa trick to get into the castle, Paris agrees to help on one condition — we go north to Ginebia and eliminate the Imperial force there.

This stage is way too large, like too many of the maps in these games. There’s a flashback here to when Riad first befriended Varcana (the demon). He was a thief but after Sarena danced for him he turned good. In this stage several new people appear — Seiren, a magician who was being used by the Empire, and Snow, a snow spirit. The king of Parakel tells us that revolts have been happening all over thanks to Riad’s actions, and he now wants us to go help Parakel. This happens to be Sarena’s home country, so of course they will go. 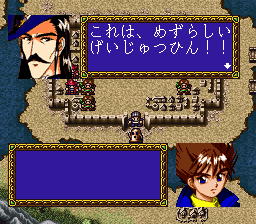