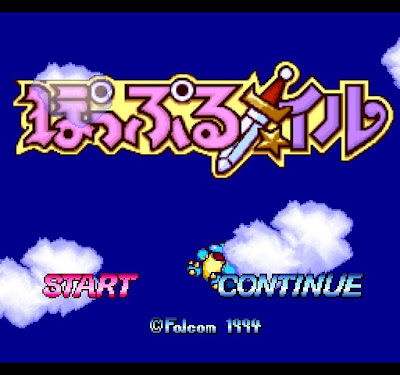 This is another Falcom action RPG, and it has a similar path to many of its previous games. It first came out for the PC-88 in 1991. By this time the PC-88 had been abandoned by most developers in favor of the PC-98, but Falcom decided to bring this out to cater to those who still had the machine. It had impressive graphics and sound for the aged system. The next year an upgraded version came out for the PC-98, and then in 1994 it was remade for the Sega CD, Super Famicom, and PC Engine. Unusually, all three of the console versions are very different from each other in gameplay, stage design, and plot details.

The Sega CD version was localized by Working Designs, who (as usual) jacked up the difficulty and added a lot of pop culture references to the script. The title Popful Mail is theirs; the Japanese is poppuru meiru. “Meiru” (mail) is the name of the main character, but poppuru is not a word — presumably it’s meant to suggest a bubbly or positive feeling to go with the main character. Popful seems OK as an English rendering. 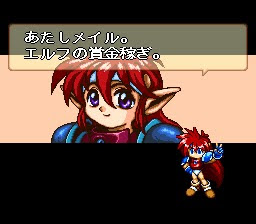 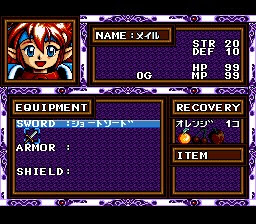 The main character, Mail, is an elf bounty hunter. She comes across a wanted poster for Nuts Cracker, of the Marionette Thieves’ Band, but she’s unable to catch him because she trips and falls. She almost gives up on bounty hunting but finds a 2 million gold wanted poster for a magician Material, and decides to make that her last attempt. The story is short (it only took me 5 hours to beat the game), but it goes beyond the bounty hunting to involve a bigger plot. They introduce a fair number of characters, and I get the feeling that they were hoping this would become a franchise since some of the characters have very little role in the story. Along the way, Mail is joined by two other characters — Tatt, a magician, and Gau, a monster. 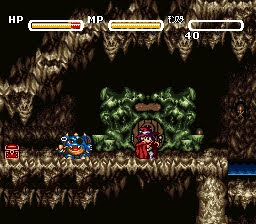 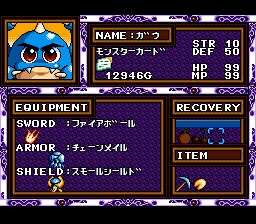 The gameplay is a side-scrolling action game, basically. In the PC-88 version Mail ran into monsters like Ys, but in this version you actually swing your sword. Mail also has a down stab and can duck to stab enemies. Tatt has several different kinds of attack magic, and Gau has several different monster powers like fire breath and swinging his tail. Gau can also jump higher, although Mail can jump longer. 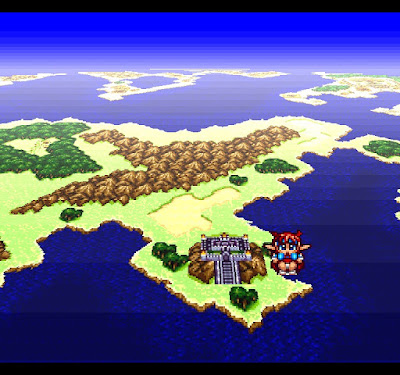 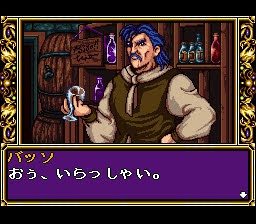 The game has five stages. You can revisit previous stages but there’s not much reason to — once you get Gau I think there are a few places you can get to in previous stages, but I’m not sure what’s there since I didn’t feel like going back. It’s not any equipment. The stages have varied layouts — there’s an ice place with slippery floors, an underground cave with limited visibility, a forest, and such. Each area has several parts, and it’s not just a linear sequence. I often found it hard to traverse and I went around in circles. Once or twice I had to look at a video playthrough to see what I was missing. 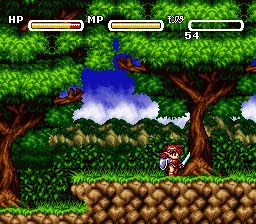 You find shops in each stage, which sell recovery items and equipment upgrades. There are no experience levels, so the only way to strengthen the characters is to upgrade equipment. Gau can find powerups to increase his attack power (you need all three to have a chance in the final stage, where each character has to fight a boss on their own). Gold is gained by beating monsters which then increases the amount on your “enemy card”, which you have to redeem at a shop. I think the only purpose of this (which seems unique to the SFC version) is that you lose your enemy card points but not your gold if you die. 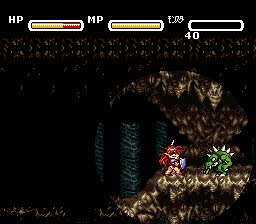 If you reach 0 hp, you recover to full but are sent back either to the last save, some invisible checkpoint, or the beginning of the boss fight. It’s annoying that you can’t switch characters in the boss fight because then you’re stuck and if you want to try a different character you would have to reset and reload your save. I also found that the final stage was annoying because you hit these story points where you’re sent into forced battles with each character against a boss, and if you didn’t find all the good equipment and powerups for the character you basically have to reset. I have a curse of always choosing the path that leads to the story development rather than the optional chests, so this bit me a lot. 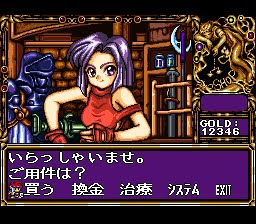 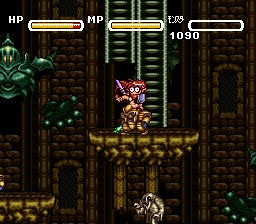 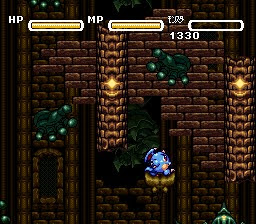 Overall this is an OK game. It’s pretty light and short, but it has cute graphics, a passable story, and a decent system. I never played the Sega CD version so I don’t know how it compares. The PC Engine version was released in August so I’ll give it a try when I get there, although I may not play the whole thing.