I didn’t say much about the story last time. This game has a much more RPG-like storyline (and overall feel) than some of the other SRPGs that lean more towards the strategy side of things. The basic story is that Emperor Sauther of the Granvelos Empire takes over the Kingdom of Kahna, where Bahamut dwells. Sauther’s goal is to talk to the Divine Dragons in order to open the path to a new world. Princess Yoyo, the daughter of the King of Kahna, can also speak to the Divine Dragons. After being driven out of Kahna, the main character gathers a band of fighters around him to try to defeat Granvelos. 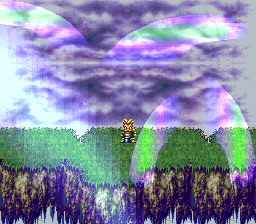 There are more twists and turns to the story, but since there’s an excellent translation patch out I won’t give away the whole thing (there are walkthroughs on gamefaqs that have the whole story anyway). Overall I enjoyed the story with two caveats. The first was that I felt too many of the characters were joke characters, even some of the characters that were important to the main storyline (Matelite, for instance). The second is that the conclusion was kind of abrupt and vague, but that’s typical of RPGs.

Between missions you can walk around your ship and talk to people. This game does a better job than most of the other games in giving each of the characters a personality and making them memorable (even though as I said, a lot of them are just played for laughs).

It is annoying that you can only save at the beginning of each chapter. Typically the start of the chapter is a story sequence, then you can explore the ship and talk, buy equipment, feed dragons, and then finally change your formations and assign dragons to each party. This can easily take 15-30 minutes just for the pre-battle stuff, and to not be able to save before the fight actually starts is an odd design decision. Of course on an emulator, save states easily deal with the problem. 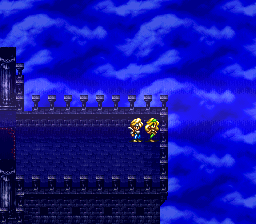 I don’t have much to say about the stages until Chapter 22 when they begin to get more difficult. By this time I had Salamander in Master Dragon form, which is a bit broken because he can’t take damage from anything. In theory you could win every stage just by ending the turn and letting Salamander do everything, but this would be incredibly tedious and take hours for each fight even with speedup keys. However, my Salamander was also very timid and would often heal instead of fighting — I actually preferred when he ran out of MP because then he had no choice but to fight.

My groups tended to keep similar units together, although I put Light Armors in some squads for greater mobility. By far the most powerful group was the Yoyo-Sendak summoner squad, who could often clean up whole areas of the battlefield just by themselves. I notice the Gamefaqs walkthrough writer is one of those people who overlevels and he claims he hardly used the spellcasters. But he also recommends all Master Dragons by stage 8 or something, which is completely absurd. This is a pet peeve of mine in walkthroughs; it’s annoying to struggle with a boss or stage, look up a walkthrough, and find no real advice because the walkthrough writer has overlevelled to the point where they don’t need any strategy.

Anyway, Chapter 22 is a large chapter that is difficult primarily because of all the cannons. They have high HP and can attack from pretty far away, damaging entire parties. Some of them are on HP regen terrain, and there are also healing units that can support them. 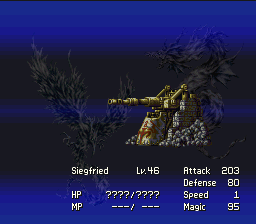 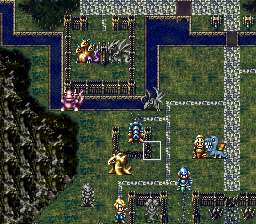 The Siegfried is the chief difficulty among them. What I eventually did was hug the left side of the screen and advance slowly, being careful to watch for the Siegfried’s range. Lightning can destroy both the walls and the regeneration spots, and you can ice freeze the moat to cross on the left. Sending out the dragons to “go” helped soften up the cannons.

For the Siegfried itself, by having the Dragons “go” to it and then moving Yoyo/Sendak up towards the middle, I was able to target Leviathan summon on the spots and take out the healing units, and then the dragons were able to destroy the Siegfried. From there the rest of the mission was not so bad — the remaining units (a dragon and two bosses) aren’t pushovers but they’re nowhere near as hard as the cannons. With Magic Gins to keep up the MP of the Sendak/Yoyo party it wasn’t too bad from there.

Chapter 23 is just finishing off the Granvelos soldiers but since there are no cannons it’s not especially hard. 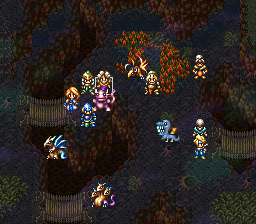 Now we head into the other world. I actually got a game over on the chapter 24 battle (above) because I got hit with too many area attacks in a row. Advancing slowly from the bottom left was a better strategy and I won the second time. Game overs aren’t that bad since you can keep all your XP, money, and items.

Stage 25 is interesting because there are only a few enemies, and only two boss units you have to beat. But they constantly summon more monsters, who have over 9999 HP each. What I did was just rush the main character’s unit and the summoners up to the boss and use area spells over and over again until they died, and I defended whenever my guys were attacked by the summoned monsters. Not too bad. 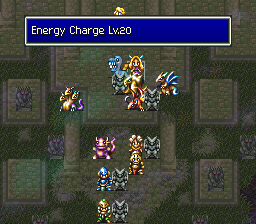 Stage 26 has a bunch of enemies but the boss Alexander. Although these bosses look impressive, it’s annoying to keep track of where the single block is that you actually attack. But I did this by basically another rush/defend strategy. 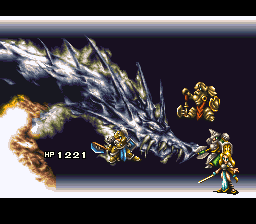 The final boss is Alexander again. He’s huge and has 4 different parts. You have to beat the healing and spellcasting parts to hurt the main head, but you do not have to beat the status effects head. My basic strategy for this was to keep most of my units away from the action so they couldn’t get hit with the devastating area effect spells. I used a lot of summoning with a lot of Magic Gins, and also main character sword techniques when I could. Fortunately the attacks frequently were directed at the dragons, especially Salamander, so there wasn’t too much trouble surviving them. 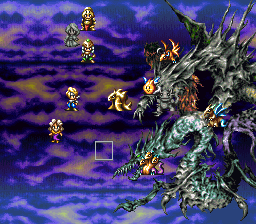 Once you beat the game, you can start a New Game+ where you keep all your levels and can even summon Alexander: 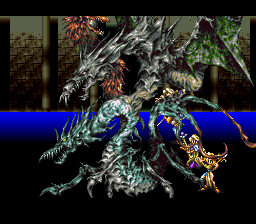 But I don’t know if there’s much purpose to this mode; there aren’t any alternate paths or endings. I guess there are one or two places in the game where enemies appear but then leave before you can beat them, and you could do it here. Or if you just want to experience the story again. 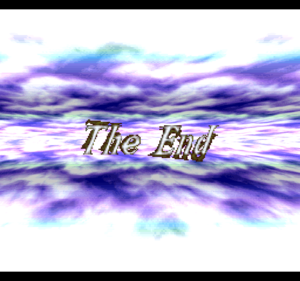