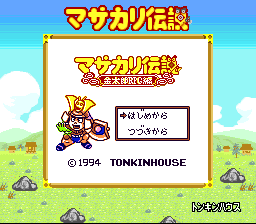 The games I’m choosing for these “off week” posts are going to be two kinds: games that are forerunners of Super Famicom games I’m playing, or games that came out around the time I’ve reached but for a different system. That’s what I’m covering this week; a game boy RPG that came out in late 1994.

Despite the obvious technological superiority of the Game Gear, the Game Boy remained a strong system — the smash hit Pokemon came out in early 1996, when the Game Gear was essentially dead. There were RPGs for the original Game Boy coming out as late as 1998, almost a decade after the system’s initial release. The Game Boy Color was released in the same year and development for the original GB stopped pretty soon after that.

One quirk of the games released around this point is the existence of the Super Game Boy, a Super Famicom cartridge that enabled you to play Game Boy games on your SFC. I highly recommend Christine Love’s series of articles called Fuck the Super Gameboy, which is an entertaining look at the technological capabilities of the cartridge and the squandered potential, as well as some games that used it well. 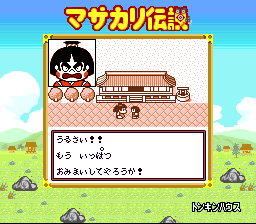 The game I’m looking at today used the Super Gameboy in the way that most games coming out around this time did — just a custom border and an assigned color palette. These were pretty easy things for game designers to provide, and my estimate is that between mid-1994 and the release of the GBC in 1998, around 75% of the Game Boy games released in Japan had at least this basic SGB feature.

I can’t find a whole lot of information about the game today. It was made by Tonkin House, responsible for the Light Fantasy games and two of the SNES Ys games. Kintaro is a famous legendary figure in Japan. There are various versions of the Kintaro legends, but the one this game follows is that he was abandoned at birth and raised by a yamamba mountain witch. He usually just wears a fundoshi loincloth and carries a type of axe called a masakari (thus the title of this game). He defeated the demon Shuten Doji and eventually joined Minamoto Raiko along with other warriors to deal with bandits and demons.

Tonkin House made two games around this idea — an “action hen” (action game) and an RPG. The RPG is just another Dragon Quest II clone; it seems like at least for the Super Famicom, designers were starting to accept that you couldn’t just clone DQ2 forever and at least try to add some new features, but I feel like designers didn’t always value the portable systems highly and were sometimes willing to shovel inferior products on there with the knowledge that the portability was an automatic draw for some people. Only 6 RPGs came out for the game boy in all of 1994, so the competition was not especially fierce. 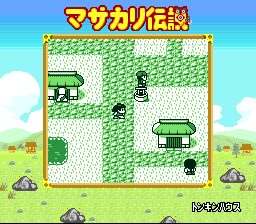 The game begins with Raiko sending out his team to deal with various oni threats. Kintaro is paired with Tsuna since Raiko is afraid that Kintaro won’t actually do his job and just go out to play pranks. He gives Kintaro a Legendary Masakari. 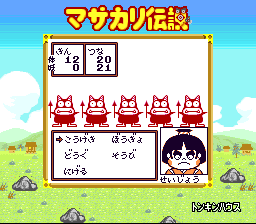 There’s really no specific goal given, but Princess Kaguya’s adoptive parents are in a house in the city saying that she was taken. That’s at least a goal but there’s no real advice on where to go. The people in the town are all accusing Kintaro of having played pranks on them…

The battle system is exactly what you would expect. The random encounter rate is quite low, and the advancement seems fairly quick so I think this would be overall a pretty easy game to play.

The stuff in town was too expensive so I just went on exploring for other places. First we cross a bridge, and Kintaro tries throwing his masakari in the river in the hopes that the river spirit will give him a better one, but she can’t because the river is poisoned. He just gets a regular masakari instead…I found a village on the east side of a forest, and they told me that a bunch of people have been captured in a cave to the south, so that seems like a reasonable place to go. 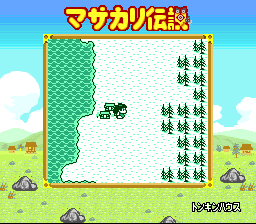 There’s a nice feature in the caves where the Super Gameboy background actually switches: 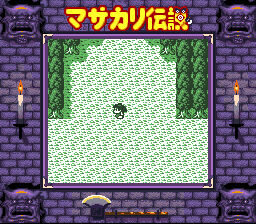 So Tonkin House did more than the bare minimum for the SGB support. The enemies here were hard, especially the fire spirits, so I did a bit of grinding and bought better equipment before trying again. In the cave are some captured women. 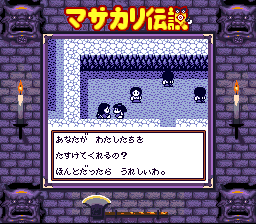 They want me to defeat the demon in the cave to free them. This is where I stopped; it’s a perfectly functional DQ2-clone RPG but nothing special. The various mythological references may provide some interest, and there is some nice humor in the conversations. I often find that portable games in this era are hard to judge fairly because they were still at a point where the capabilities of the handhelds lagged way behind the consoles, and the portability was a big bonus of the games. But nowadays the portability no longer matters unless you insist on playing everything on original hardware. That’s not to say that no one managed to bring out any portable games that were competitive with the console games, but games like Masakari Densetsu just don’t seem all that worth playing now.

I’m afraid that I will need one more of these off week posts before I get back to Super Famicom — Bahamut Lagoon is turning out to be a little longer than I thought, and I have family visiting this week so I may not have that much time to play. But I should definitely be back with Wizap the weekend of April 10th. (EDIT: I think I should be done with Bahamut Lagoon by tomorrow so we should be OK.)