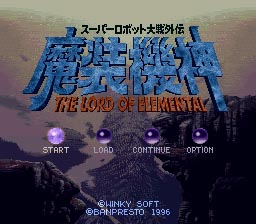 When I get to the Super Robot Wars games I usually post old message board posts; in this case I really don’t have much — I was doing a story summary instead, which is obsolete now that there is a full translation patch. I’ll add a bit more to what I wrote. In the main SRW games up to this point, in addition to the licensed franchises like Gundam and Getter Robo, they had original characters who came from another world La Gias. The third game, EX, takes place in La Gias, mixing up the licensed characters and the originals.

This game divides into two parts — one that takes place before SRW 2, showing the origin of Masaki and the other Masou Kishin characters. The second part takes place after SRW 4 and continues the stories begun in EX and the first part of Masou Kishin. The series then lay dormant for a long time, before a sequel finally came out in 2012, followed by two more games to finish the series.

Now on to the old posts.

Despite 4S, the Super Famicom was not yet dead!  Almost two years after the release of 4, SRW Gaiden came out.  This was a huge advance on 4 in many ways — graphically, musically, gameplay, everything.  Although it is labeled Gaiden, it introduced a number of significant improvements that carried over to future SRWs.

Some of the changes that did carry over:
– For the first time, the map has a 3/4 view and full robots instead of just faces.  This would not be introduced into main SRWs until Alpha.
– Units now gain EXP for repairing and refueling.
– The Masou Kishin characters now get their own themes — this is the first appearance of Flapper Girl, Dark Prison, etc.
– Character faces now have multiple versions that show different emotions.
– The character designs for the Masou Kishin characters were all redone into the form that they have had ever since (even down to OGs).  As a comparison, here are Masaki, Shu, and Ryune in their EX and MK incarnations:

System things that did not carry over:
– The robots are full sized instead of SD (this is used in the next game, but then never again)
– Height and facing matters
– There is a “zone of control” system (Banpresto used this later in the Summon Night and Black Matrix series)
– Units have Prana in addition to EN

My final verdict on SRW:LoE is “so-so”.  In general I don’t like the all-originals games as much as the regular ones.  LoE’s high point is the characterization and the dialogue between them.  The story is kind of weak; like I said, a lot of the plot points are retreads of EX and the plot sort of jerks around from one story to another.  There are a lot of places where the story writers don’t really seem to know what they’re doing (i.e. when Jogg and Rasetsu show up to take the Duraxylls and Tudy just lets them do it).  The battle system is OK.  You get attacked from behind a lot because everyone has such a high move rate and there’s hardly any terrain to block them.  The double-attack ability is the worst ability ever in a SRW game [2020 note: This is a system where people can sometimes get two attacks in a round, and this game still has the double move from the old SRW games. So you get situations where someone can take 4 attacks in a round, which can be an auto kill even for overlevelled units.]

Now that this game has a translation patch it’s easy to play it, so give it a try if you like SRW — although there’s a later DS remake that might be more fun.