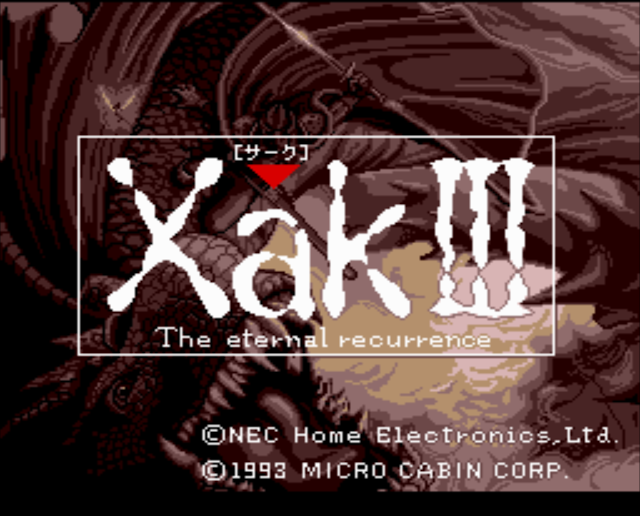 This is the final game in the Xak series, which had three main games and two side games. As I said in my previous post on the game, it is clearly modelling itself on Ys: an action RPG with meaningless short name for the series, and a first game split into two parts.

As with the previous games, Xak III began as a computer game and was later ported to PC Engine. From what I could see on Youtube, the port is pretty faithful although the computer version had a stat called EP in addition to HP and MP, I don’t know what that is and don’t think it’s in the PC Engine version.

The first two games had the Ys-style “run into enemies” system, but this game has you press the button to attack. The port is disappointing like the original games’ was — there is hardly any voice or cutscenes throughout the game, not even at the beginning. I actually wondered if there was something wrong with the copy I had but the first cutscene doesn’t happen until a bit through the game and there are only two more (a very brief one near the end, and then the ending scene). However, this might be good because surprisingly this game actually has an English translation patch — they don’t do anything with the voiced cutscenes, but they don’t add much to the story and you can almost guess what’s happening in them just from the pictures.

The game is quite short as is typical for ARPGs of this era (the youtube playthrough is 6h30m). However, it does conclude the story of Xak, as Ratok takes on the third evil general (having beaten the other two, Badu and Gospel, in the previous games). The question of what happened to Ratok’s father is addressed as well, and there’s sort of a conclusion to Pixie and Frey’s stories too. You could definitely play this without playing the first two, though, since anything of importance in those games is repeated here.

The graphics in the dialogue scenes are not bad. 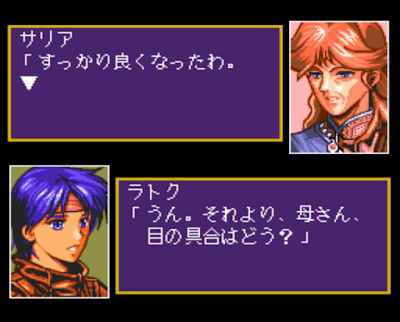 The opening scene is the bloodiest thing I’ve seen yet, where this dude comes into the castle and kills the King, ripping his head off. The princess then says he might as well take her head too, and he rips it off, leaving both heads on the throne. The PC Engine generally allowed more explicit content (in both violence and sex) than the Super Famicom did. 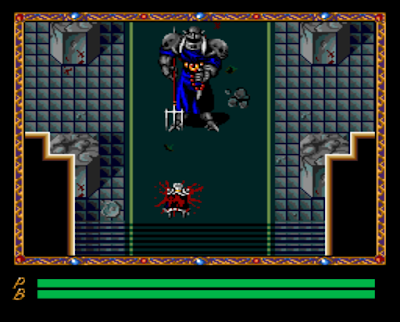 Like the last game, this game has jumping puzzles, but they’re nowhere near as annoying as the previous game — for one thing, you don’t die if you miss the jumps, and the graphics make it much easier to see where the platforms are and where you’re supposed to jump. 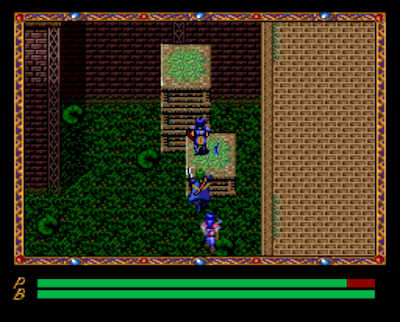 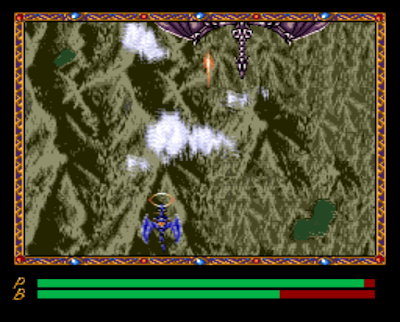 Unlike the first game, you get companions in this game — most of them are from the other games (Frey and Ryun, for instance). They just run around and fight on their own, and are actually relatively helpful unless they die — you can’t change screens without reviving them. 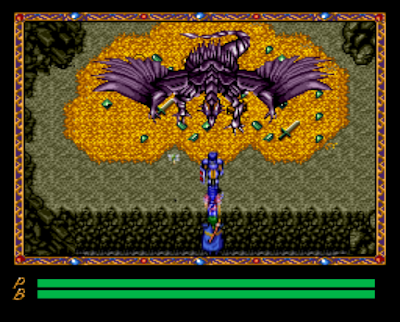 Overall the game is easy. There are some parts (particularly near the end) where the grunt enemies hit hard, but the bosses can almost all be beaten just by mashing the button and taking hits — as with the previous game, it’s easy to level because the amount of XP you get from the enemies never goes down. You can also buy tons of healing potions since there’s nothing else worthwhile to spend money on.

There’s a lot of laziness in the interface and presentation — you can’t see stats of items at all, so you have no idea what to equip (I can’t believe we’re still seeing this at the end of 1994). You can “teleport” back to any place you’ve been with no explanation for why. There’s no real backtracking or exploration, it’s more like a series of stages.

This is not an especially good game, but it’s not terrible either. That being said, the Ys games that were coming out around this time weren’t all that great either (except for Dawn of Ys, I suppose). But somehow Ys was able to continue on to the present, but Xak never produced another game after this. I’m not sure if that had to do with Micro Cabin itself, or the sales of Xak relative to Ys.