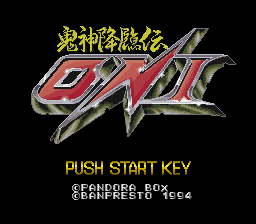 This is the fifth game in the ONI series of RPGs. The first four were all for the Game Boy. After this game, there’s one more GB game, one more SFC game, two Playstation games, and finally a DS game in 2007. The game developer, Pandora Box, has been in this blog before for Danzarb, and I’m about to play their PSX SRPG Sengoku Cyber on my other blog. They are also notorious for the PS2 game “48 (temporary)”, a legendary kusoge.

From what I can tell, this is the first ONI game to take place in the real world. It’s set at the beginning of the Kamakura period, when Minamoto no Yoritomo is the Shogun. The game opens with his brother Yoshitsune’s death, but it seems that after that, his spirit has returned to get revenge on Yoritomo. The main character, Hokutomaru, is a foster child of Yoritomo, and he sets out with Yoritomo’s son Yoritoo (who seems to be fictional) to defeat Yoshitsune’s spirit. 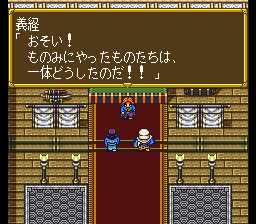 The game actually begins with Yoritomo’s daughter being abducted by an evil spirit raised by Yoshitsune, and we have to head out to rescue her. The interface is clean and easy to use, and I hope we’re entering a period of games where this kind of thing becomes standard — the walking speed is fast, you can see the stats of equipment when you buy it, who can equip it, and whether it raises their stats or not. You get descriptions of what techniques do both in and out of battle. There’s no annoying inventory limit, and the battles are a decent speed.

Characters do not have experience levels. Instead they have levels and XP in four areas — attack, defend, speed, and faith (magic). All four will level up as you fight things, but if you defend or use magic in battle, or run from battle, you can level those areas. I don’t know whether this actually increases the total amount of XP you get in a battle or just divides it differently. 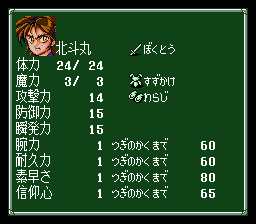 Speed is the hardest one to emphasize because running from battle is done individual per character, it often fails, and you end up getting killed while trying to run. So if you’re going to try you need a lot of healing. I never did figure out what causes your HP and MP to increase. I think it has something to do with either your total levels or maybe average level but I’m not sure.

The battle system is mostly standard, but the magic is done through getting kami to join the party, associated with different characters. You can then use spells from those kami, although most of them require a certain Faith level to use. Some kami give several spells, with stronger versions appearing as you gain Faith levels. Overall this is a nice system; the only problem is that virtually all of the kami are optional, meaning that you may miss important magic if you don’t do a lot of backtracking or looking for out of the way places. This does mean there’s a lot to do other than just going to the next plot location, but it’s sometimes frustrating because you have to backtrack to places for no reason and with not many hints. 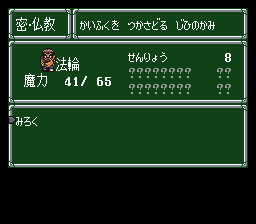 There is also another system involving five god weapons; each character is associated with one of them and when they get them, they can transform into yokai monsters. In that form they cannot use their spells but they have stronger attacks that are more effective against certain monsters. You can use the settings to decide whether they will start battles in their human or yokai forms.

We start out in Kamakura. The map is based on Japan, and a nice touch is that when you use the item or spell that warps you to different towns, you get a map of Japan. 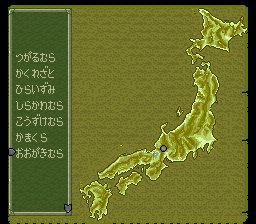 Finally, there are NPCs you can get (to a limit of 8, I think). Some join automatically (like Naozane in the first town), others you have to pay money or give items to. One of the most useful is Zourin, who lets you run faster by holding down L or R. Others will heal you during battle or make attacks. 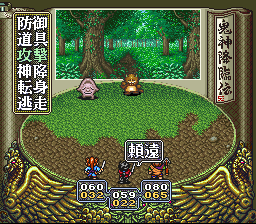 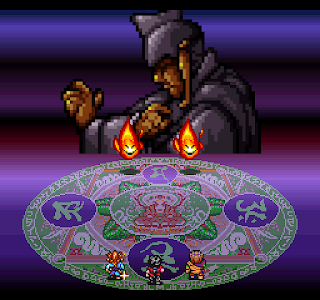 Saving Yoritomo’s daughter takes us to the north of Japan, to an underground castle. Along the way there are some subevents and other things to do, many of which involve traditional Japanese yokai like onibaba (demon hag) or the like. We also get Hourin, a drunken priest, and a warrior Hitaka. Hitaka is looking for the god weapons so he can find the one that matches him. We do find one of the god weapons in the underground castle, but it’s not Hitaka’s — it actually turns out to be Hokutomaru’s.

When we return to Kamakura, Yoritomo now tells us that Yoshitsune is going to try to get the three sacred treasures — the jewel, the sword, and the mirror. (These are the Imperial Regalia which were most recently presented at the current Emperor’s enthronement, although there are doubts as to whether they are genuine. As this game indicates, they were all present at the battle of Dan no Ura at the end of the Genpei wars and may have been lost then.) Yoritomo himself has the jewel, and so he wants us to look for the Kusanagi Sword and the Yata Mirror so that Yoshitsune can’t get them. The Mirror is in the capital (Heian), so that’s where we head next. 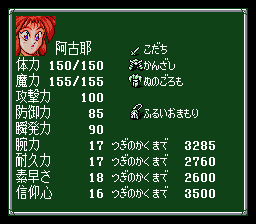 It turns out the mirror was stolen by some ruffian children who also steal our money. They live in a squalid village outside the capital. They’re actually all orphans, and two older girls look after them. When we convince them that we need the mirror, they return it and one of the girls, Akoya (I think), joins us.

At this point there are a whole bunch of optional places you can go to get various gods for your characters, but the next requirement is to visit Kuraiyama where a demon named Ryomensukuna (from Japanese legend) tells us where we can find the five God Swords. Supposedly if we can find them all, the way to the Kusanagi Sword will be revealed. 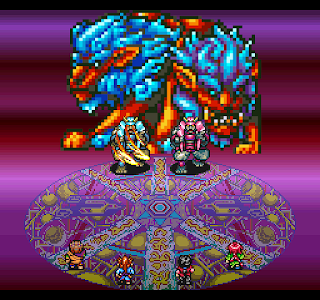 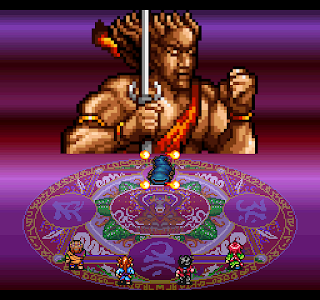 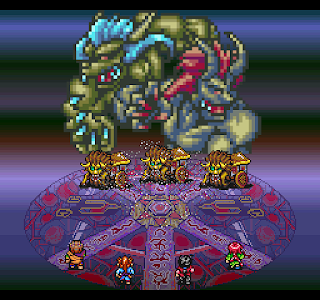 So this is the usual RPG trope of traveling the world looking for X number of objects. Hitaka rejoins us along the way which fills out the party to the full 5, of course all of our characters are the God Sword wielders. We have to go all over Japan, including up to the north and down to Shikoku and Kyushu (not Hokkaido though). Along the way we meet Benkei who has become a tengu, gain a lot more gods, and beat up a bunch of monsters. The main revelation in this part is that the main character is actually Yoshitsune’s son. (This part is probably half the game’s content)

Finally we have all 5 swords, and it’s time to go to Dan no Ura to get the Kusanagi Sword. But it turns out that Ryomensukuna was deceiving us, and he now has the ghosts of the dead Heiki soldiers pull us (Genji descendants) down into the land of Yomi. 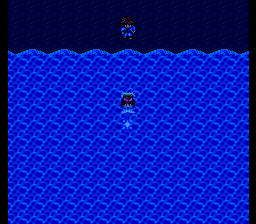 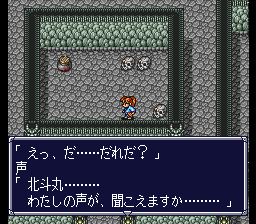 A mysterious voice helps us break free, and along the way we meet some helpful dead such as Tomoe Gozen. Eventually we learn that Yoritomo’s goal is to kill all yokai, even the good ones, and that we need to stop him. After several areas we recover the Kusanagi Sword and use its power to escape Yomi. Now it’s time for the final battles. First up is Yoshitsune, who is in a long dungeon in the NW of Japan. We also meet Ryomensukuna, who is apologetic — he never intended for all of this to happen, although it’s a little bit of a false apology I think. In any case he acts as a heal/save point. 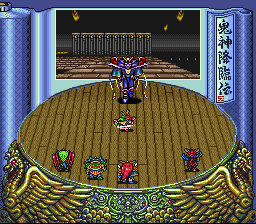 Yoshitsune himself is not that hard; by this point it seems like I was quite strong and could handle the bosses. It turns out as Yoshitsune was dying, he was possessed and turned into a yokai by another monster, who wanted to use him for his own ends. Of course we kill him too. Yoshitsune, as he dies reveals that he was actually married to a yokai (so the main character is half-yokai) and he was killed by Yoritomo because he refused to participate in killing all of them.

Now with Yoshitsune gone, it’s time to deal with Yoritomo. He’s back in Kamakura in the small starting palace. There’s also an optional super boss, but you have to have certain items before you do the Yoshitsune part since you can’t leave Kamakura once that’s done. So I was not able to try.

Yoritomo himself is not very hard, neither is his yokai form after that. 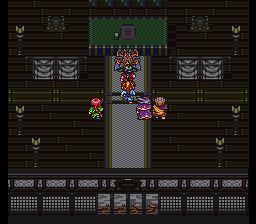 But after Yoritomo is beaten, it turns out that he himself was being controlled by Abihiko. He says that he is the god of the Genji (although Abihiko is a real mythological figure I don’t see anything suggesting he was ever associated with the Genji). 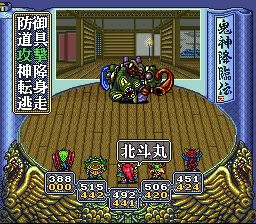 And here we get a common thing in these RPGs — the final boss is a huge leap up in difficulty. He has three parts. The main body does an all attack that did 2/3 of my character’s HP, so I died very quickly. I tried 5 times, but it turned out that I just had to grind. Once I had done enough grinding I was able to first take out the right part (which heals) then the middle part (which has the devastating attack) and finally the last part.

After you beat Abihiko the palace crumbles. I wonder what percentage of JRPGs have the final dungeon crumble after the final boss and force the heroes to retreat. It’s one of the most common tropes. 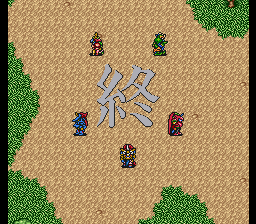 So overall this is a fairly decent game. It suffers from a few flaws common to these old games, primarily that the random encounter rate is too high. But it has a lot of Japanese mythology and history in it, there’s some complexity to the system, and the interface is smooth and playable. I would definitely put this among the best games I’ve played so far.