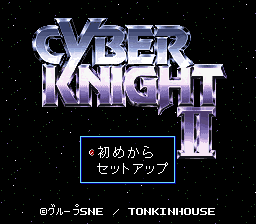 This is a followup to Cyber Knight, originally released for the PC Engine in 1990, and then an enhanced port for the Super Famicom in 1992. It was one of the earliest games I played on this blog, although I didn’t finish it because I found the system obnoxious and the random encounter rate too high. Nowadays I would probably enable cheats to finish it, but at the time I just skipped because it had a translation patch.

This game is better than the original, but I still don’t like it. It didn’t get good reviews at the time, so I’m not alone, but I think I just don’t appreciate what the designers were trying to do. 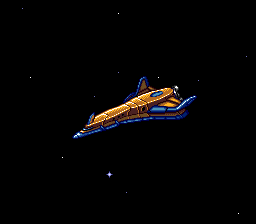 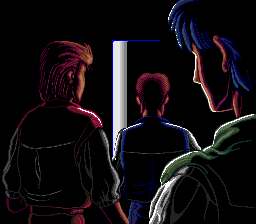 Like its predecessor, Cyber Knight II tries to create a more realistic sci-fi system. What this means is that your main characters never gain any “stats” or HP, they just level up their skills. Your mechs never gain any HP, and the only way they can upgrade stats or get new weapons is by getting parts from certain enemies and then analyzing them back at the ship. But this can only be done once per enemy. This certainly is more realistic than having the mechs level up, or having some vague currency that can magically turn into mech upgrades instantly. But I think it makes the game less fun; there’s a very pre-determined feel to your power levels. You have very little choice in how you upgrade or equip your mechs, and grinding is almost entirely eliminated, especially since defeating enemies earns you basically no experience.

I also feel that the galaxy is more style than substance. You make L Jumps to choose a system. Then S Jumps to go to a planet, and then you land in a particular place, and then leave the ship and explore. But typically each system has a single planet that you can land on, and a single place you can land on the planet. Then when you land, you almost always land right next to the city or base you’re trying to go to. So the majority of the time it seems like you’re just wasting time in menus to create the illusion that you’re exploring the galaxy. And it means that in terms of what you can actually access, each star system is about the size of a small RPG town. 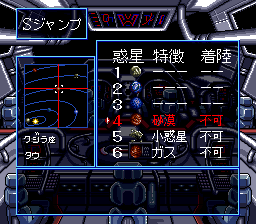 The story is a direct sequel to the first game. The six characters were on the Swordfish ship, which was transported to another galaxy. They made it back to our galaxy, but they brought back “over technology” which the Terran Empire is now exploiting for their attempt to conquer the galaxy. 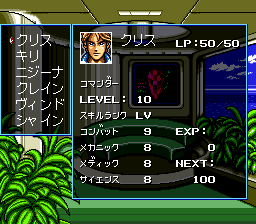 I will link back to the original post on Cyber Knight for the gameplay, which is basically the same. One big addition is the auto battle. This game has the same annoyance as the first game where if you try to attack but the enemy moves in or out of your range on their turn, you lose your turn. But this game has an auto-battle which is quite good and avoids this entirely because the auto battle is able to decide on its attacks after the enemy has moved. I don’t think this is a good mark for the battle system that this workaround exists, but I ended up using auto battle on virtually every fight in the game except the boss fights where it’s not allowed. The only other change they made is that when you are outside, the 3 members who are not in your main party can do support attacks or moves before the battle starts. Sometimes they can kill the enemies themselves. 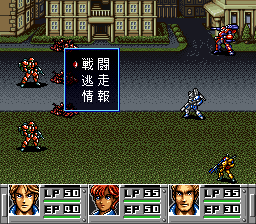 The story is divided into five acts.

It turns out that while the main characters were gone, Earth underwent a lot of trouble, and now a military government is trying to recapture its glory by all out war with other systems. Our home base is a planet called Kyazarin where there is a resistance movement; this is the hub during the game where you get information and new missions. We head to Mars to try to find the Swordfish itself, but it’s already been moved. A mysterious woman CJ appears here and there to give information. On the whole this act is just introducing the situation and fighting against the Earth forces on the outskirts. 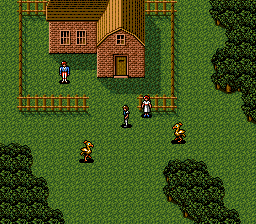 The main things that happen in this chapter are a plague on Gagarin, which kills a childhood friend of Nijina (one of our party members). Also an increase in terrorist activities and resistance movements, which we support (“terrorist” meaning resistance in this case). 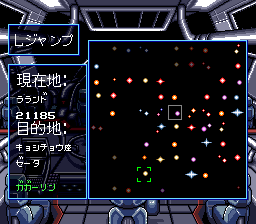 I often found the boss fights hard, and the only way I beat a lot of them is that for some reason, Vind in the blue mech could not be hit by anything. I don’t know if this is a glitch or just some broken game balance, but that helped me all the way through the game including the final boss. I doubt I would have finished the game if it weren’t for that.

Most of this act is devoted to us trying to get the leaders of 4 different planets. Some of them accept the documents easily, others have to be convinced (or unmasked as secret Terran Empire operatives). But by the end we’ve got the big alliance. Finally at the end of the act we find out where they’ve taken Swordfish, and infiltrate it to get its powerful Jump Generator, which will allow us to access more planets. However, MICA, the artificial intelligence that helped us out in the first game, has been removed from the Swordfish and we don’t find it. 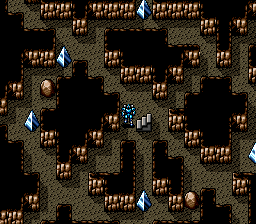 In this act we supply the alliance with weapons, and also see that on some planets, dead people are rising again. Hmm…

All the mysteries are revealed here — the dead people are rising due to nanobots, which are going to replace humans in the entire universe. The Terran Empire, in fact, is also being controlled by them. But we finally find MICA. She tells us that if we can defeat the Braniac Computer on Earth, she can interface with the nanobots and get them to stop. But this will instantly increase her intelligence a millionfold, and she’ll no longer be MICA. 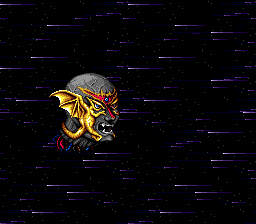 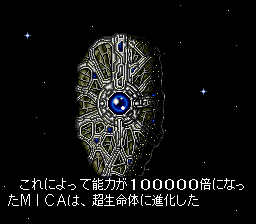 This is in fact what happens, and MICA then combines with the nanobots and they all go into another dimension. It turns out that CJ, the woman helping us for the whole game, was a manifestation of MICA that sent herself back through time to help us.

Overall the story is fine, but I just didn’t like the gameplay. I can see some people really enjoying it because it’s unusual. I know it seems like I complain when the game has a normal RPG system and then complain when it has a different one. But different doesn’t always mean good.