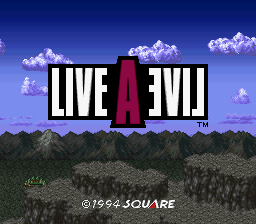 Square games are always a welcome sight; even if they end up not being all that good, at least they’re memorable experiences and you know they’re going to try something new. In this case, the basis of the game is that you play seven different stories of different types (really just based on different movie/TV cliches): Prehistoric, Kung Fu, Western, Ninja, Modern, Near Future, and Sci-fi.

But Square didn’t stop at just making seven different normal RPG stories. Each story plays very differently, and in all the scenarios there are things you can do differently each time you play, and often optional content as well. So even though the scenarios are pretty short, there is replayability.

I always wondered how to pronounce the title; according to the katakana, both words in the title rhyme with “five”. The game was developed by a number of notable people in the company, including the music by Yoko Shimamura, known for her work on Street Fighter II, Kingdom Hearts, and other games.

You are free to do the seven scenarios in any order, and you can even replay a scenario when you’re done. You can also back out of a scenario and pick a different one, although you’ll have to start the other scenario over if you want to go back to it. Once you finish all seven scenarios there’s a final conclusion scenario. 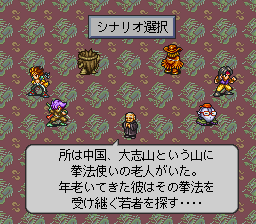 I started with the prehistoric scenario. The intro tells you that this is a time without speech, and indeed, there is no dialogue at all in the story. (The idea that prehistoric people had no language, or that they used a grunting form of communication is highly suspect and doubted by most linguists.) 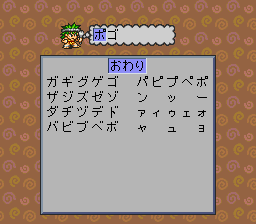 The main character, Poko, is a member of a cave tribe. A girl sneaks in, and though the old elder doesn’t like it, Poko hides her and feeds her. When some people from a rival tribe decide to kidnap her, Poko is ejected from the tribe for going against the elder, and he goes in search of the girl.

This is a pretty traditional RPG scenario. None of them have any money, so the only way you get new equipment and items is by finding them, or in this scenario, combining multiple items to make a new piece of equipment (which you can do by talking to certain people). 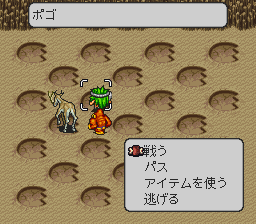 Battles play out on a grid. You move around and attack, and once you’ve used up all the movement/action for your side the enemies can go. It’s an interesting system but I wish it were clearer when the enemies would get to act. You also share your actions with the other people in the party, so that you can ‘pass’ and have one person take all the actions.

Each character has a number of moves that have range and area of effect. None of the moves in the caveman story have any descriptions, which is annoying, but you can find out what they do. There are basic attacks, farts that poison people and affect an area, throwing fruit, and such. Upon levelling up (at 100 XP) you can uncover new techniques. I believe level 16 is the max level. Also, your HP recover to full at the start of each battle.

I found the balance rather poor in this story; I kept hitting parts where enemies were doing enormous damage and I had to go back and grind a bit, and even then run away. 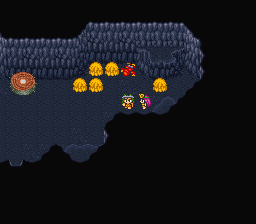 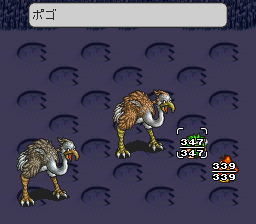 The graphics are a mixed bag — the monster sprites in battle are well done, but out of battle the graphics are at about Metal Max 2 or FF5 level. They’re not as good as FF6 or Romancing Saga 2.

Eventually Poko saves the girl but then has to team up with her and the guy who captured her to find ODO, a spirit of some sort. And that’s the end of the scenario.

Next up I chose the Kung Fu scenario, but I messed it up so I had to back out and try later, I’ll cover it in the next post (and discuss the mistake I made).

So I went on to the bakumatsu (end of Edo period) chapter, where you play a ninja. This is a complicated and long chapter, but what I found the most frustrating about it was how dark the graphics were. I understand that it’s a ninja episode so he’s operating in the shadows, but when the player can’t see the screen well enough to even know where things are it’s a problem, and at least on my laptop I was not able to turn the contrast up enough. It was easier to play at night when I could dim the lights and see better, but I don’t like playing this way. 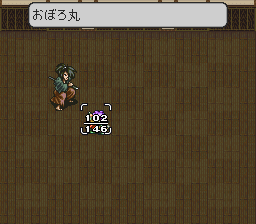 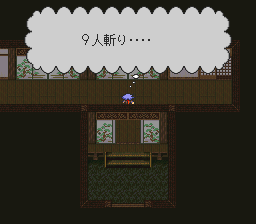 This chapter involves Oboromaru sneaking into a compound to kill the leader. The layout of the dungeon is very complex, with a lot of hidden doors and passages to multiple places. The game keeps track of how many people you kill — it’s possible, though difficult, to complete the scenario with 0 kills. If you do this you get a bonus weapon. But it’s much easier just to kill people you come across, which is what I did. (You can press and hold down Y to hide)

Along the way Oboro finds keys, goes through watery passageways, sneaks on the roof, encounters women (who can be killed along with the samurai) meets up with a guy trapped in a cell, and ultimately makes his way to Ode Iou, the boss. Once he’s beaten you get a demon: 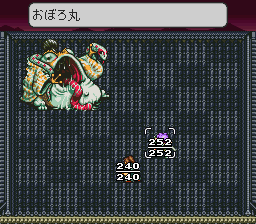 The key to most difficult fights is positioning. In general, enemies are given powerful attacks that only work along diagonals, or at range, or close-up, etc. So you often have to play the battle a few times to figure out where to stand, and then it’s reasonably easy to win the fight. Fortunately you can save anywhere so if you die you don’t have to go back very far.
It turns out the prisoner was Sakamoto Ryoma, and you can join him to make a better Japan or go back to being a Ninja (this doesn’t really matter).

My next choice was the Western-themed one, which is based on classic Western movies and shows (I think this one is especially indebted to Shane). 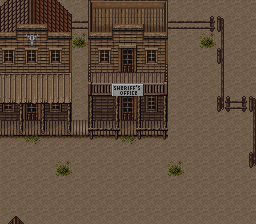 This chapter is also much shorter than the others I played. Sundown Kid, the main character, comes into this stereotypical western town after another gunfight with Mad Hat, his rival. It turns out that the town is being terrorized by a gang of toughs known as the Crazy Bunch. Sundown teams up with Mad Hat to take them down, with the help of the townspeople.

You have to rush around and find as many items as you can to give to the townspeople to make traps. There’s not much indication of what the traps will be, but the more traps you can set, the fewer people you’ll fight in the final sequence. You do have a time limit, and that includes giving the townspeople time to set up the traps. 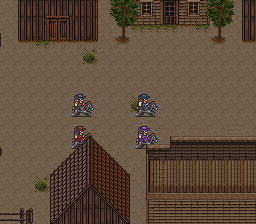 I think I only found about half the traps items I needed, even though I searched every house. So the Bunch was still pretty large when I had to fight them. 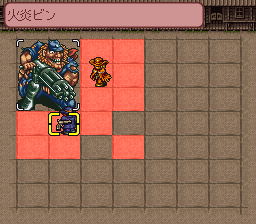 Even so they weren’t very hard. The boss (Dio) is easy if you stay off the diagonals. Then Sundown Kid has a final showdown with Mad Dog and rides off into the sunset.

So far this is a pretty decent game, although at times annoying. I should have it finished by next weekend unless the final scenario is really long.