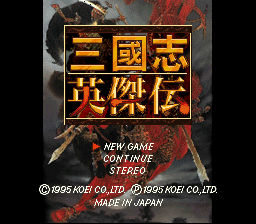 Koei is a company well known for its historical simulation games, a reputation that began with Nobunaga’s Ambition in 1983. In the 80s and 90s pretty much all their games were first developed for computers, and then ported to a variety of home consoles (although they seem to have handled the ports themselves). Nowadays I think most people know them for Dynasty Warriors and spinoffs; when I was a kid the Romance of the Three Kingdoms strategy games were their best known product in the West. (They’re also known for their very expensive games; prices of 13,000-15,000 yen were common for their Super Famicom games).

Koei released five strategy RPGs in the “Eiketsuden” series, three based around the Chinese “Three Kingdoms” period, and two in the Sengoku period of Japan. All of them were made initially for computer, and four of them were ported to consoles (Sangokushi Cao Cao-den was never ported). The first one is the game I’m playing here. It was ported to Super Famicom, Playstation, and Saturn. As far as I can tell, the three versions are almost identical other than minor graphical differences, so I’ll just play the SFC one. 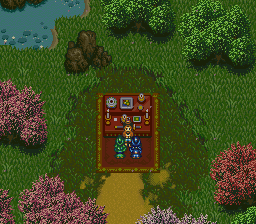 The story seems to generally follow the Romance of the Three Kingdoms novel, although the main ending does not follow the novel (see below). Apparently there’s also slightly different outcomes depending on your turn count and Liu Bei’s level. I’m not going to go into great detail summarizing the story since it follows Three Kingdoms so closely and there are so many Chinese people and place names that would be a chore to look up.

The main character is Liu Bei, along with the usual companions Zhang Fei and Guan Yu. The opening scene shows the Peach Garden Oath (although with no text) and then the story jumps to the fight against Dong Zhuo. I think the game does a decent job of telling the broad story without being too confusing, but a lot of the detail is lost. And (although I haven’t read Three Kingdoms) I think that without the detail the story just seems like a series of battles. Probably for fans of Three Kingdoms this aspect is a lot more satisfying. 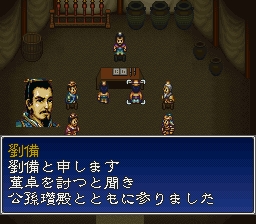 One issue I had with the game is that because they have to follow the Three Kingdoms story, there are a large number of characters, and the game is constantly throwing new characters at you that are much better than your current group. So you don’t have that feeling of building up a party of characters throughout the game unless you intentionally avoid using the better characters. Most of the time I barely knew who my party was other than just stats and their unit type.

There’s another issue with the Three Kingdoms story that Koei always has to deal with. They went with Liu Bei, Zhang Fei, and Guan Yu as the main characters. But in history (and in the original Three Kingdoms novel), Liu Bei ultimately fails in his goal to restore the Han monarchy. Guan Yu is killed by a betrayal, and after losing the Battle of Xiaoting he basically retreated to his castle and died there a year later. Ultimately Sima Yi, who is a main antagonist, is able to win and unite the realm under his son, who founds the Jin Dynasty.

There are a lot of branching paths in the game, although most of them are just minor variations or choosing which of several simultaneous battles you’ll do. The game does have a “historical ending” that you can get by losing several battles in a row and making certain dialogue choices, but the designers certainly want you to go for the ahistorical ending where Liu Bei restores the Han monarchy. 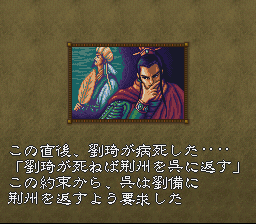 So that’s the story. The gameplay is divided into 4 chapters. Each one has a series of battles, but you can also sometimes travel on the map and visit places in town to buy equipment and talk to people. 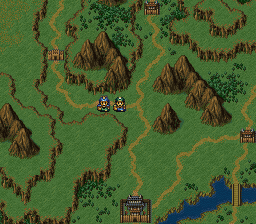 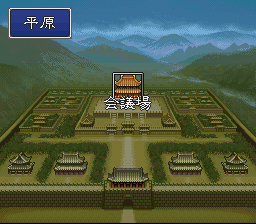 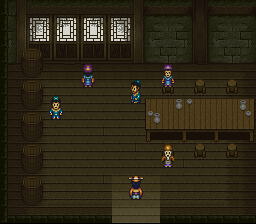 There are a variety of items and equipment you can get, but I found them fairly useless overall. The weapons and armor give only very slight increases to stats — like +2 to a stat that’s at 250. Some of the unique stuff you can find in battles is a bit better. The one exception are the horses, which are good to equip because they increase movement rate. There are also attack and heal items; I barely used these after the initial stages but maybe they can ease your progress if you make better use of them.

The people in the bars and meeting areas give you some hints on how to play the game and use the system, and a bit of information about the world. 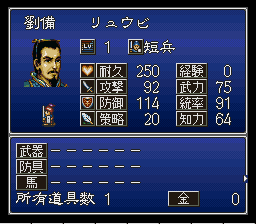 Each character has a class. The main classes are swordsman, horseman, and archer. Each of these have two upgrades (one at level 20, one at 40). In addition to these classes there are tacticians, foreigners, ninja-type units, and a few others. You can get items to change people into these classes, but they have no upgrades. As I said earlier, the whole class change and upgrading thing is not as satisfying as it should be because of how many overpowered characters they throw at you starting in about the middle game. I spent a long time with my initial archer levelling him up painstakingly to the highest class (catapult), but right before I was able to do it the game gave me two catapult guys that were way above his level.

There are also tactics (basically spells) that all characters have. Liu Bei gets great healing techniques that help out a lot, whereas Zhuge Liang and some of the other powerful tacticians get huge damaging spells that are also very useful by the end of the game. The tactics of most of the other characters are not quite as useful, but they help in a pinch and the healing spells at least gain XP. 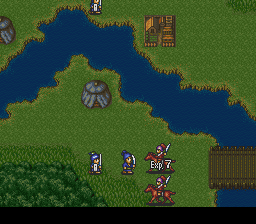 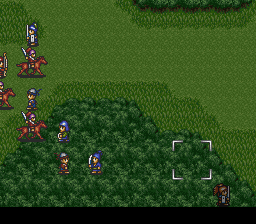 Of course most of the time is spent in battle. This is typical player-enemy turn style. Terrain gives bonuses, but can also hinder movement (and horsemen cannot go into forest, whereas the side classes can sometimes go into the mountains). There is a weapon triangle system with swordsman->archer->horse->swordsman, but I don’t know how or if the other classes fit into this. Characters also have a zone of control so that in many cases you cannot pass by them (sometimes I was allowed to pass by but I never figured out why — it may be that Lu Bu’s horse gives a special power but I don’t think so).

Usually the goal is to defeat the leader, but there are sometimes other victory conditions instead (like reaching a base, getting Liu Bei next to a unit, running away, etc.) Typically the alternate conditions give you XP, which is a bit Feda-like. 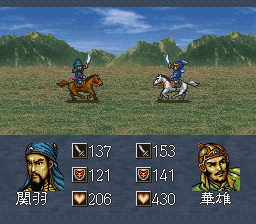 In many battles, if you move certain units next to other units, they will fight and you’ll automatically kill the enemy. Sometimes the pre-battle dialogue makes it obvious, other times you just have to get lucky. In a few cases these result in the unit joining your team rather than dying. 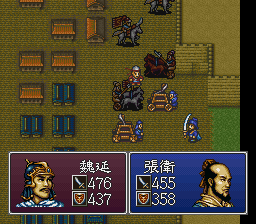 The indoor maps can be difficult because of how easily units can block areas, and hit you with their archers from behind walls. Unit blocking can also be a problem with bridges on overworld maps. Overall the difficulty of the game is not that high, although the most difficult part is the middle part. 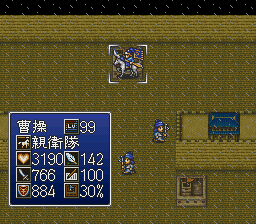 The final battle is against Cao Cao, who faked his death, but if you can reach him he’s not too bad. He has a spell that does half of everyone’s HP in damage but even standing on the good defensive terrain I was able to beat him in two turns with just half my party there. 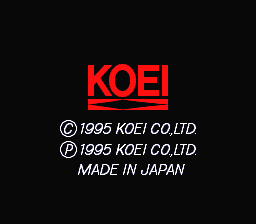 Overall this game is decent. It gets a bit long and tedious, which is a common problem with SRPGs, and I probably would have enjoyed it more if I was a bigger Three Kingdoms fan. We’ll return to this series in 1997 with Koumei (Zhuge Liang)-den for Playstation — from what I can see on a quick view of youtube videos, it’s relatively close to this game, but we’ll see.

Here is a later addition I’m making to this post to cover the Playstation and Saturn versions. As far as I can tell the gameplay, story text, stages, etc. is exactly the same as the original. The graphics look different from the SFC; the maps are done in a different perspective, and instead of sprites during the story sequences there are just pictures of the characters. 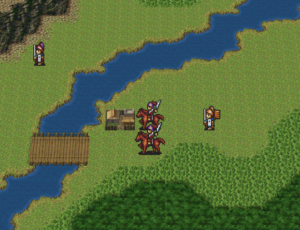 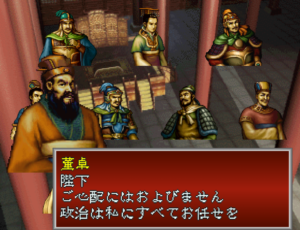 The Saturn version and the Playstation version are the same.