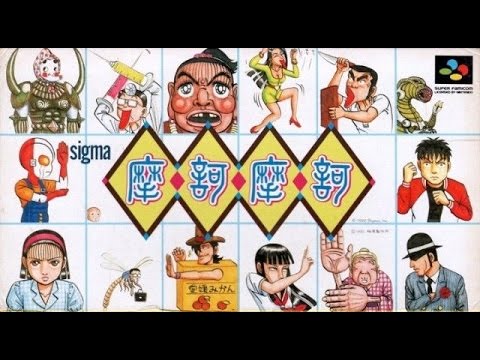 I’ve never liked Japanese gag manga. The one most familiar to Americans is Bobobo-bo..etc, but every manga magazine has one or two. They often rely on a lot of bizarre randomness and silly humor, and manzai-style comedy. I’ve never been able to get into any of them. Maka Maka is essentially an RPG based on the gag manga style. The character designs were done by Aihara Koji, a gag manga artist, although he didn’t have much to do with the storyline of the game.
This game is widely known as an archetypal “kusoge”. Not only because of the bizarre setting and characters, but also because of the numerous bugs. A lot of old games have bugs, some of them pretty bad ones (e.g. Final Fantasy 1’s non working spells and elemental weapons). But Maka Maka has bugs that can render the game unplayable, freeze you in place or trap you in glitchy areas, and interface bugs that are obvious to anyone playing it.
How did this happen? No one knows for sure. One theory is that the bugs were intentional, to fit with the theme of the game. Another story is that a beta version was accidentally released as the full game.
In any case, the game starts out with your parents being turned into water fleas for no reason, and then you have to set out to find your girlfriend’s father, who is a scientist you hope will be able to turn them back to normal. I gave the main character and girlfriend silly names to go along with the theme (Goppoyon and Bayoppi♥).
One issue I’ve had with this game is that the emulator’s screenshots are flawed. The title screen and name enter screen are fine, but once you get to the actual game the screenshots are squashed in a strange resolution. I don’t know if this is another bug in the game or the emulation, but I’m going to have to manually fiddle with the screenshots and they won’t look as good.
There are some interesting ideas in the game. Your characters gain the ability to use magic (or “transform abilities”) by visiting a save point and learning about their past lives. They can then transform into those past lives to use spells. The graphics are pretty good for the time. The characters are large and colorful, and the enemies have bizarre but memorable designs. There are appropriate animations for each attack (which change depend on the weapon you have equipped) and animations where you turn into your past selves to use the techniques. This is definitely the strong point of the game.

Unfortunately that’s pretty much where the good parts of the game end. We have to chase the professor to an airplane, which you sneak on to with the help of Johnny, a travelling adventurer. He sneaks on the plane by hiding in an orange box, which then becomes his permanent clothing for the rest of the game. This is where you also encounter a horrible bug. Outside of battle, only the hero’s spells can be used. If you try to select another person’s spells, it shows them, but then the hero’s spells come up instead. It still subtracts MP from the character, which allows it to go lower than 0 and roll over to 65535 — this might seem good but then that character’s spells become glitched in battle and can’t be used.

The effect of this bug is if any characters have out of battle spells, they can never be used. Johnny has an “escape from dungeon” spell that is impossible to use, and he also has the poison heal spell which would be very useful early in the game but can only be used in battle.
The plane is soon attacked by people from the Maka Maka group (who were shown in the intro trying to take over the world.)

We crash on a tropical island, and this section has the usual “islander” stereotypes; the art and situation evokes the worst of Western-inspired racist portraits. You have to get married to the prettiest girl on the island, who is instead depicted as very ugly. Of course we have to escape, so the next sequence is saving a phoenix with a medicine, who then walks you off the island (it was the wrong medicine).

The next town has nothing but croquettes (fried potato cakes) walking around. You are shown into a restaurant, and then you fall into a pit and get turned into a croquette yourself, and served to Princess Gourmet, who immediately eats you.

The next dungeon is inside Princess Gourmet. This is where I first encountered another horrible bug in this game — sometimes when you change floors, you can either get trapped in a wall or just be unable to move, and you have to reset and reload your game. Apparently you can avoid this by not taking the most direct route to the next floor.

Fortunately you meet your next two PCs — the girlfriend of the main character, and Masa, who wants to be the greatest chef in the world. Upon escaping from the stomach of the Princess it’s then time to fight her:
She’s not that hard. Once she goes down, we can reach the plane where the professor was, unfortunately he’s gone, but his notes are still there. And now we have to go to Castle Gourmet to defeat (I guess) Princess Gourmet’s father and move on with the game.
That’s where I left off for this time. Some miscellaneous notes:
In the worst case scenario it is possible to have bugs that force you to restart from the beginning; it doesn’t sound like this happens to everyone, but if it does I’ll move on to the next game.