In the last post, we had gained a way to fly on the world map at a cost. This was in order to fly to the Evrai temple to deal with the problems they were causing. Unfortunately we get trapped in the town and they want us to convert to Evrai. 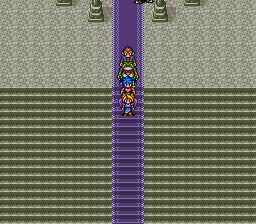 Fortunately there’s a resistance group we find that leads us into an underground tunnel. The place you escape has the best fishing rod, allowing for fishing the most powerful sword for the main character — the best way to do this is with Coins (“gold” in the English translation), although I noticed that bsnes’ turbo feature does not register fast enough, at least mapped to the middle DS4 pad, to do it. So I had to mash.

Now joining up with the resistance, time to storm back into Evrai? No, we need money, meaning we have to find everyone’s favorite thief Patty. Once we do this, we can break into Evrai. I don’t know what boss this next picture is but it must be around this point.

This might be the fight against the Dragon that gives the main character the G. Dragon power, which does 999 and is very useful against future bosses. In any case we launch the assault on Evrai church but the leader is more powerful than we thought. As we continue to chase him, there’s a sad scene with Rand: 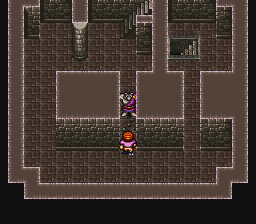 His mom sacrifices herself to let Rand go on and join the party.This is a long dungeon, but eventually we reach the boss: 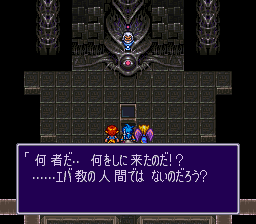 There are three endings to the game — one bad one, and then two others that I’ve seen called “normal” and “good” although both have sad/happy parts. If you want the “good” ending you have to avoid killing the old man here (hurting him is fine). So no Dragon powers, which makes this fight one of the harder boss fights.

The old man Ganer then puts himself in a machine at Community so it can fly. I’m not sure what happens if you defeated Ganer instead because the machine has to fly for the rest of the game to work.

Unfortunately you lose the bird which is dumb because the bird flies faster, and I believe it locks you out of some of the fishing areas. 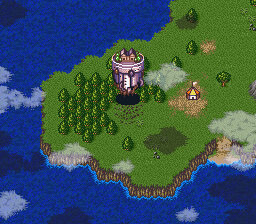 Now we finally can go back to Gate, the town from the beginning of the game. This is the final sequence of dungeons. I created some MP restore items through the cooking guy (although not enough as I found out later) and some Biscuit items (hard senbei) that restore everyone’s HP and add defense.

I didn’t really bother with the shaman fusions because they get removed when someone gets to low HP, and this happens constantly (especially since so many enemies in the final dungeon have instant death attacks). This was a really poor decision by the designers and made the shaman fusion much more of a hassle and less important than it could have been.

Before we can enter the final battle, we need…Patty? Yes, it turns out that she is the main character’s sister. The villagers foolishly decide to bomb the dragon out of the way, but this just opens the gate 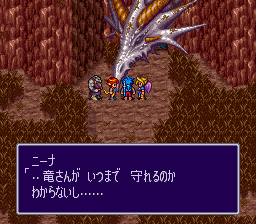 At this point you can choose to have the Dragon continue to protect the gate. This leads to the bad ending, where the demon in the gate eventually gains enough power to overwhelm the world. So instead we should have the Dragon move aside so we can go in and kill it. 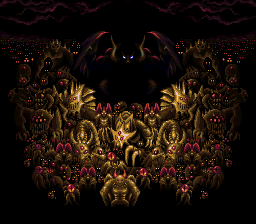 The final dungeon is long, although it has several places where you can rest, save, and one place with shops. I needed the levels from the dungeon to do the final boss. Midway through the dungeon, we happen on an underground village with the remnants of the Dragon clan who tell Kurisu that his destiny is to defeat Death Evans, the “god” that the Evrai church has been following. There’s also a long flashback scene with Kurisu’s mother.

First, though, we have to beat Barbary. 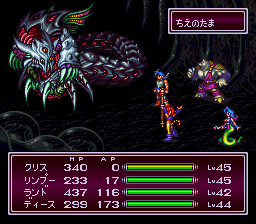 My first try I had a lot of trouble, so I left the entire dungeon and got more Wisdom Balls (+100 AP) which let the main character use G Dragon every other turn. This helps a lot. 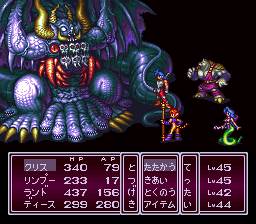 Now in the final boss Kurisu uses the Infinity Dragon to make Death Evans vulnerable. There was a long sequence indicating that Kurisu would have to sacrifice his life to use this — maybe I’ve forgotten how they dealt with this but he doesn’t die. Death Evans is much easier than Barbary, though.

Now after the fight, if you didn’t save Goran, Kurisu has to become the dragon to guard the gate. If you did save Goran he’ll use the town to block the entrance. And the game ends. 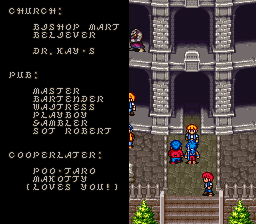 The ending sequence goes through the “chapters” of the game and lists all the characters that were in each scene. 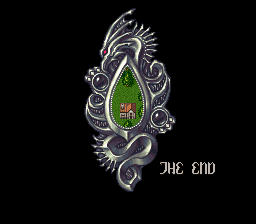 I think Breath of Fire 1 was a better game. BoF2 has some pretty severe balance issues that make large stretches of it not very fun to play. The plot doesn’t really do anything until the last section. The shaman system is hard to use, and the Dragon breath system is not as robust as the first game. I also didn’t think the dungeons were as creatively designed as the first game. On the whole I had much more fun with the first game than the second — Carlos in the last post said that BoF2 is an objectively better game but I’m not so sure about that.

With this game I am halfway through my quest! (65 games out of 130). I’m playing Energy Breaker (SFC) on the other blog and then we’ll come back here for The Last Battle. I’m done with vacations so we should see fewer “gap” posts in the next few months (although probably there will be one next week).