(This is a scheduled post while I’m away on vacation. I’ve beaten BoF2 so that final post will be up next week.) 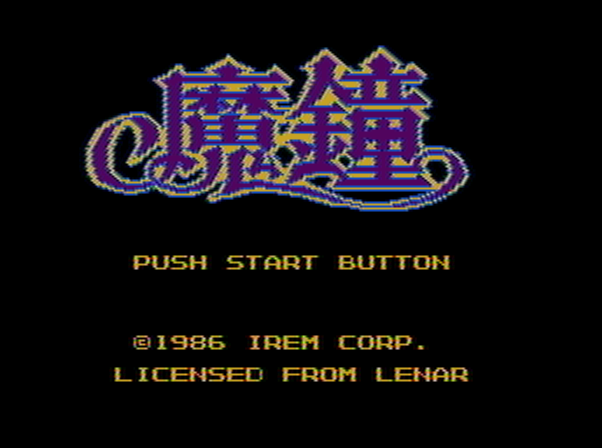 This is another action game, and an infamous kusoge both here and in Japan. I think there’s a perception that Japanese players liked these games better than we did, but this one got bad reviews in Japan as well. It’s clearly in the lineage of Druaga, Hydlide, Zelda, and such. You have a (small) open world, most of the game content hidden with no hints, and a protagonist who starts very weak compared to the monsters. But it’s closer to Hydlide and Adventures of Valkyrie in that the initial difficulty is quite high, and you’re going to die a lot before you even come across the basics of what to do. One thing that Zelda got right is that you can make a fair amount of progress at the beginning of the game before you run into the really difficult hidden stuff or nasty monsters.

I vaguely remember playing this game as a kid — I may have rented it or just played it at a friend’s house, but I didn’t play it much.

Although the reviews are mostly negative, I have seen some that defend some parts of the game, at least. It really seems like the main problem with the game is how weak you start, and how difficult it is to make any early progress. Unlike Valkyrie and Hydlide, there’s no XP, so fighting the initial enemies gets you nothing but a few Ludder (the money). And in order to spend that Ludder, you have to find the hidden dungeons and then the shops within those dungeons.

Here’s what the dungeons look like (credit to GameFAQs):

S is where you start, X is the exit, and the other letters are the shops (the green blocks are just what the walkthrough writer used to show where you should go). These dungeons seem unnecessarily large given that most of those rooms have no purpose. So you have to deal with a lot of game content to just get even basic upgrades for your character. There are heart containers you can find early in the game (and easily) that raise your max HP by 10, but these provide little help at the beginning because whenever you die you start with 100 HP regardless of what your max is.

So I think this is where a lot of players get frustrated and give up early; it’s hard to keep playing a game when you don’t feel like you’re making any progress. I think it would have helped this game’s perception quite a bit if there were a basic shop near the starting location and if the starting enemies were a bit less hardy.

I’m going to try using a walkthrough to see what the game is like if you know where the secrets are. 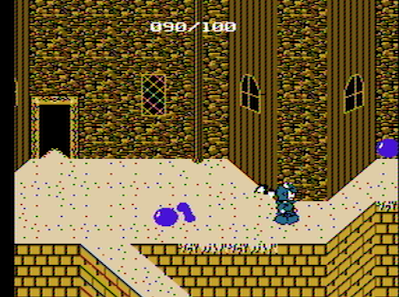 The problems with the system are well known — you shoot out a sword, but only one can be on the screen at a time. The enemies take tons of hits to kill, and any time you get hit you get moved down the screen, and if you fall off the bottom you die. Sometimes you get hit back into a previous screen and then immediately hit more enemies.

The first goal is to get stronger equipment, so I headed to dungeon 4. 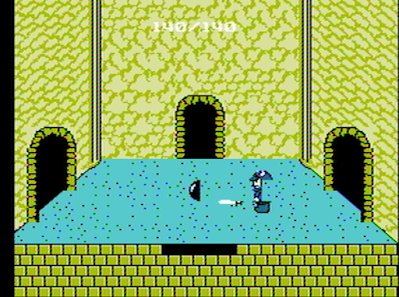 Using the map it’s not too tough to find the shop, and there’s a certain enemy that is very useful for earning Ludder — it’s a large enemy but if you stunlock it as soon as you enter the room you can kill it easily. It still takes a lot of enemies to get enough money to buy stuff. I got the Hyper Boots, Chain Helmet, and Shield. 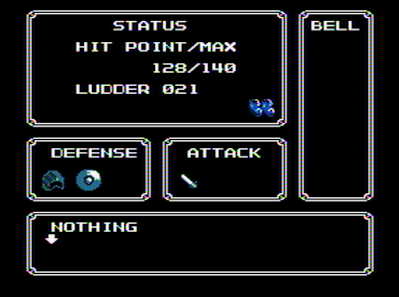 I then headed to a second dungeon to get some Armor and a glove to increase attack speed, but I was dying a lot. And I figured that I should be playing BoF2 instead of this so I quit.

The goal of the rest of the game would be to find the hidden areas that have seven bosses, each of which has a bell when you defeat it. You then have to destroy the bells by using a magic fire in the main castle, and then you can progress to the final boss. The areas with the bosses also have additional secret rooms with the most powerful equipment in them. All of these hidden areas (including the dungeons and towers) require you to step on specific places on the maps, that aren’t marked in any way.

So is it more tolerable with the walkthrough? Marginally, but it’s still not a good game. With the walkthrough you can at least avoid the problem at the beginning where you’re making no progress, but even with the additional equipment, Prince Myer is weak. You get knocked back by enemies, often into other enemies that then knock you further. You can enter a dungeon room and die before you even see what was there.

Just as playing early SRPGs revealed to me how well designed Fire Emblem 1 was (for its time), playing these early action games has shown me how well designed Zelda was. Zelda certainly isn’t perfect and I think the obscurity of its secrets would be unacceptable now, but it stands out from the crowd.