So at the end of the last post we had beaten Fat Badger but now the alien Gyab Far has appeared to take his place as the villain. With the help of Dr. Deep and the Great Gnome, we learn that Gyab Far really wants the Aura Ball (the real one, not the fake one that was holding the robot). To get the Aura Ball we have a nested fetch quest — get the Combo Shell from the Aura Dragon in the Valley of Eternity, which we can get by finding the four Shell Dragons in the world. But to get there we need a submarine, which unfortunately has been stolen.

Also the robot is able to get a vision of what’s happening on Gyab Far’s ship, which is pretty gruesome: 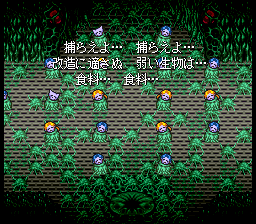 First up I recovered my companions and reequipped them, and went back to the Seaman village to find the stolen submarine. It was just stolen by some random pirates that are easy to beat. 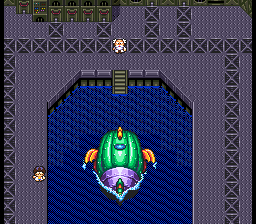 Now with the Submarine we can go anywhere in the water, including Guardian Island in the SW (there are some other places you can go now as well — there are a lot of hidden items and optional content in the game but the high random encounter rate often discouraged me from getting it.)

Underneath the Guardian Island, the Red Dragon marks the four locations of the elemental dragons on our map. They’re near the four corners of the map, and each one requires doing some kind of dungeon and then beating the dragon. 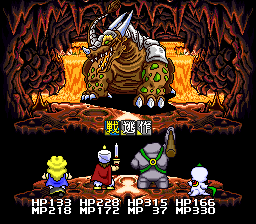 Once you beat a dragon, you can then summon it for 60 MP, which is quite helpful in beating the other dragons (anyone can summon them). The last one is Red Dragon, but when I returned to him, monsters have killed everyone in the island. I beat Red Dragon and then he tells me about the Valley of Eternity, which is below the earth. It also turns out that this woman Kushura who has been appearing here and there in the game is actually Gyab Far’s daughter, Gujo, who was tailing us to find out about the Valley. She manages to capture Kurisu, so the next part of the game has to be done without him. 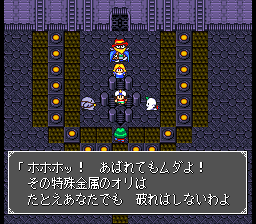 I replaced him with Mag, who is the only other character with the town warp spell. The goal is to save Kurisu from the Bio Base where Gujo is keeping him to run experiments on him and perhaps sap his life force for food for Gyab Far and his minions. 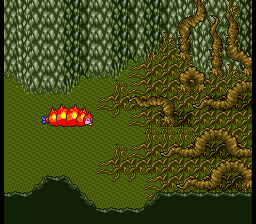 By recovering a bug from the northern cold area and bringing it back, it will eat all the nasty plants blocking the Bio Base.

The Bio Base is a grisly place; as you go through it you find trapped humans, many of whom beg you to kill them because they’re being tortured and kept for food. 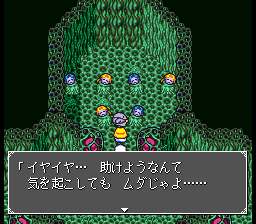 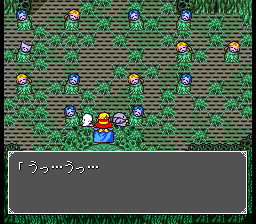 Gujo herself comes out, and has to be beaten without magic. 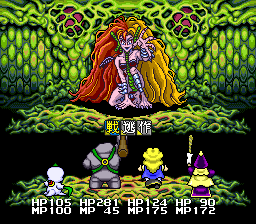 She’s confused by why we care so much about Kurisu, but after she runs away we can rescue him and get rid of Mag. The bug also grows into a moth that can fly around and carry us — allowing us to return back to Shell Island where the game started. 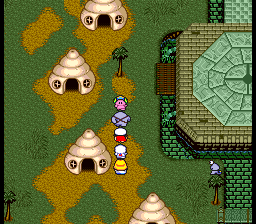 Here we have to fight the Great Shell Dragon, but with all the four summons (and Linda’s heal all full spell) he doesn’t put up much of a fight. He joins as well (only Kurisu can use him) and we go down into the earth as Gyab Far’s forces attack the town. 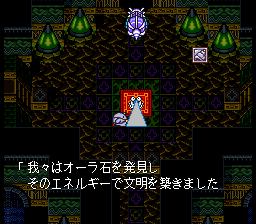 Now we are in the Lost Continent. We have to find passwords from the two villages here to enter the Valley. The best thing is one of the villages sells Magic Cubes (restore all MP) for very cheap; buying 99 of these lets you continuously restore Kurisu’s MP to cast Grand Shell Dragon over and over again, which was my main tactic for the remaining fights.

Once we get the passwords and open the Valley, Aura Dragon appears and challenges us. 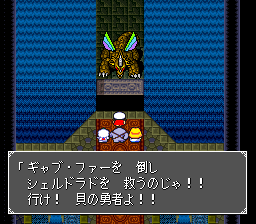 He’s strong, but with the 99 magic cubes it’s not too hard to beat him. Now we have the real Aura Ball! Dr Deep upgrades the sub to go down to the deepest areas, and we can finally visit Gyab Far’s lair. 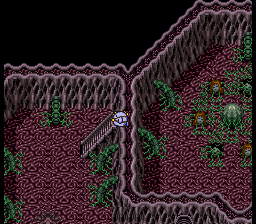 As is usual for final dungeons, this one is fairly long and has multiple sub bosses in it. 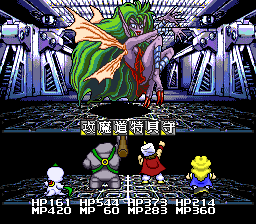 Gujo takes her final stand, but then regrets her actions and discovers the power of love! Only to have Gyab Far kill her. Gyab Far himself is a huge bug, so I guess all the “sucking out the life force of humans” makes sense. 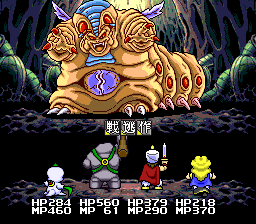 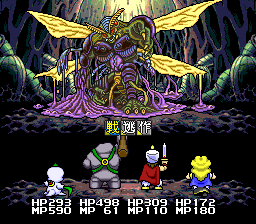 He has two forms. I used the same strategy — Grand Shell Dragon with Kurisu, Zardon attacks (with Powered), Bub mostly restores Kurisu’s MP, and Linda defends until she needs to do a heal all.

The world (universe?) is saved and everyone returns to their lives. Everyone wants Kurisu to stay but the fire shell transports him away (back to his home I guess). 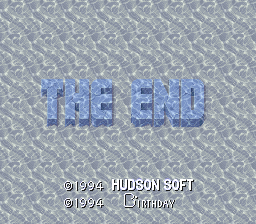 Overall this is pretty good. The random encounter rate did get to be a problem for me, and I avoided a lot of the hidden items and some optional areas because I didn’t want to deal with it. But the story is decent and everything plays smoothly. We’ll be back for the second entry near the end of the blog. Next up is the ARPG Ryu Knight (which I actually just finished before I wrote this post).