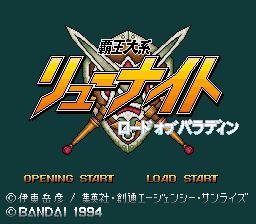 Ryu Knight is an anime series that started in early 1994 and was still running when this game came out. It’s a mech anime that’s based on fantasy role playing games, with “class changes” and class-ups, and clear RPG-style character classes for the main characters. I encountered the series in Super Robot Taisen NEO for the Wii but I don’t remember a whole lot about it. The story of the game does not directly follow either the anime or OVA.

It begins with Adeu, a knight, receiving the Ryu mech from a mysterious sage who tells him to seek the Earth Blade and win a great tournament to become the Lord of Paladin. I’m not sure how the TV series works, but Adeu seems to already know the other characters (Paffy the mage, Izumi the priest, Sarutobi the ninja). 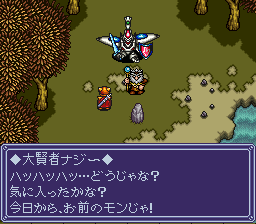 The game is an action RPG with some open world-style content. There are 12 areas you can go at the beginning, each one with an anime-style episode name. You can visit most of them right off the start, although you won’t necessarily be able to do anything there — sometimes to make events happen in one area you have to do something in another area. This can be confusing and it can be hard to know what to do to progress unless you’re taking careful notes. 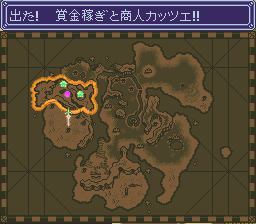 Some of the areas, quests, or dungeons are optional, but I’m not exactly sure what is required to win the game. There’s a clear final event and there’s at least one event you have to do before that, but one walkthrough I looked at said you needed to do “all events” before the final one will open — I don’t completely know what they mean by that, because there was one area I never found out how to get into and I didn’t do everything. 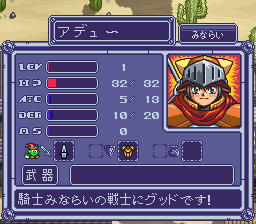 I started off with the first area. One thing you notice immediately in the first town is how expensive the weapons and armor are — the store is selling 10,000 gold equipment. You start with 1000 gold and get very little gold in the early areas. Enemies do not drop gold, you only get it from chests and finishing missions. This brings on immediate worry that you need to scrape together every coin, never stay at an inn or buy unnecessary stuff, etc.

But, this is a mistaken idea. The equipment the stores are selling are special weapons and armor that you never need to get. The main way you upgrade your equipment is by “fixing” your armor or “tempering” your weapon. This doesn’t seem to do anything when you first do it, but when you reach level 11, 21, 31, etc. you “class change”. At this point you can do the tempering/fixing and after 2-3 tries (at 100 gold each) it will upgrade to a stronger form (I think the GameFAQs faq author who never finished the game did not know this; I hope it was in the instruction manual). So you really don’t have to save money as much as you might think; I never ended up buying the special weapons and had over 100,000 gold at the end of the game.

You can also buy items. Some of them are the usual cure items, but others are equippable things that give effects like periodic heal, walk on air, jump off platforms, etc.

I started out in the first place they put you. It’s a western style town. 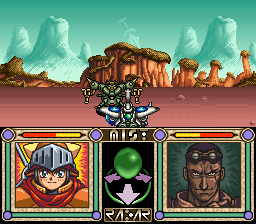 The sheriff wants me to deal with some bandits. When I left the town, I was almost immediately confronted with one of the 3D sections. These are action scenes where you have to try to kill the other mech. I lost 4 or 5 times and then looked for a web page to tell me how to play. It turns out you should charge up an attack, which does take a bit of HP off but it’s easier to hit and does more damage. With that I defeated him and got an emblem on my status screen. I’m not sure what the purpose of these are; I think you can get 6 of them during the game for defeating various people but they have no clear effect.

Now that he’s gone, I can experience the 2D action system. 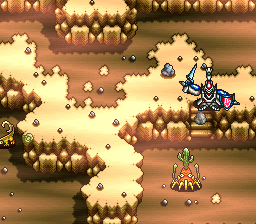 It’s a pretty basic ARPG; you have an attack and jump button. There are some special attacks you can do but I never used any of them (either I couldn’t get them to activate or they seemed worse than the basic attack). When you defeat enemies, you get some XP and they give off a bunch of crystals that give more XP. An annoyance is that you can’t see your current HP without going to the status screen.

As you can see in the above screenshot, you can also summon Ryu. This allows you to beat the enemies fairly easily. However, Ryu is large and often gets stuck in areas, and you get much less XP fighting as Ryu. So I tried to do it as little as possible.

Afterwards I headed up to the NE of this area where some more thieves attacked me, bringing up another 3D fight. This guy is pretty easy because he stops for a while and you can bash him with the charge attacks. Another emblem, and some rewards from the townsfolk.

The second area has just a few sidequests that are pretty easy and make you good money, including beating up some thieves and delivering a letter. Katse the merchant joins, but I don’t see the point of her since she doesn’t fight and leaves later. 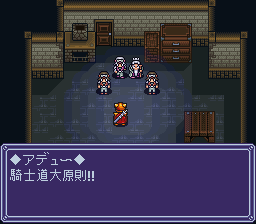 The third area is just an elf village and nothing of interest, so I moved on to the fourth. In this area the Dwarves have lost their voice from a dragon. I had to go back to the first area to find a magician to release the dragon, and then beat it (with Ryu) to restore the dwarves.

The fifth area has Freedel and a secret magic guild; I have to find out who is hunting them and defeat them. Doing so has Izumi the priest join. I was never able to figure out how to get him (or Paffy) to use their spells. There’s something in the menu that looks like you are able to select spells and it shows the MP cost, but no matter what buttons I pressed nothing would happen, and so all my party members just followed me for the whole game. 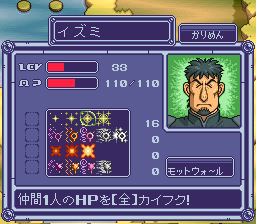 Place 6 and 7 have nothing right now.  I was never able to enter Place 8; there’s apparently some frog town there but when I try to go to it, nothing happens.

Place 9 has the very rich Mithril Town, but the goblins have stolen their Mithril Ring. This quest has the first 3D battle in a while, and I earn another emblem for defeating the Goblin mech. 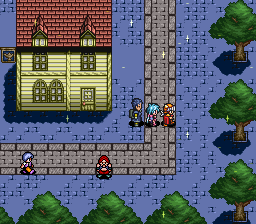 Place 10 is Paffy’s kingdom, and she is missing. There’s not much of a clue to where she is, but we’ll try to find her. It turns out she’s back in place 7, in a village with a bunch of big ape things (who don’t attack, Paffy just joins up when I find her — I must have actually done this before the mithril town as you can see above). 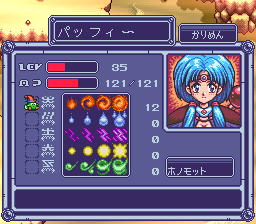 Sarutobi joins in place 11, giving me the full party. He’s the best person to control because he has shurikens, and when they get upgraded they can go in multiple directions or home in on the enemy. 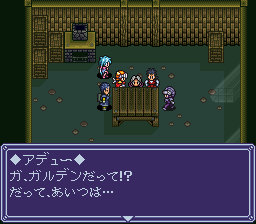 At this point there were still some things I hadn’t done, but I headed back to Paffy’s kingdom to start the final series of events. Paffy gets kidnapped by Galden, one of the villains from the series (I guess?). They’re looking for the gem she has on the end of her staff, although they don’t know that’s what they’re looking for (they just think she knows where it is). Galden is in Freedell Castle, and there’s another 3D battle. 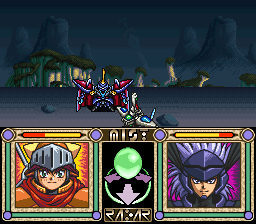 Now we return Paffy and the king opens up the way to the tournament area (why is it so hard to reach?) I misunderstood the dialogue and ended up in an optional castle where I could never find a warp tile that you can see in there but not reach. But the XP is really good here so I managed to get up to level 58 (well beyond the final armor/weapon upgrade). Finally I figured out the warp you’re supposed to use is actually back in Pafresia castle. This sends you to the clouds, where you need an item to walk around. 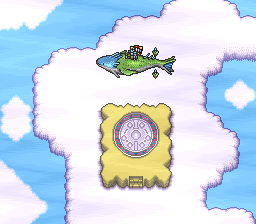 This whale thing takes us to the teleporter up to the tournament area, which is in a featureless room with no spectators (does this make more sense in the anime?) 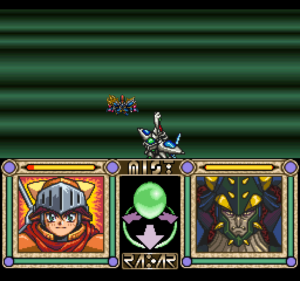 There are 5 3D fights in a row here. I think because I had levelled up so much in that castle, I was overpowered and they were all pretty easy. Then Ryu becomes the Lord of Paladin and has to fight the final boss, a dragon that threatens the whole world. He was easy too. 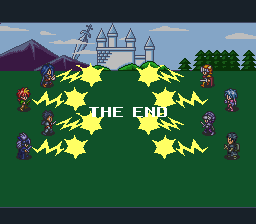 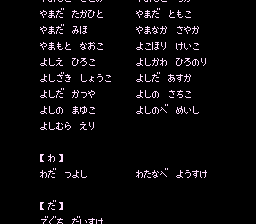 The closing sequence has the longest list of “special thanks to” I’ve ever seen in a game credits — I don’t know who all these people are but there are at least 100 names on the list, so many that they have to divide it into sections based on spelling. 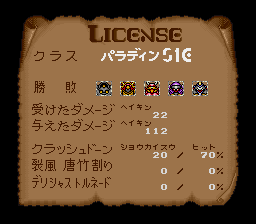 Then you get a results sheet that shows the emblems you got, the damage received and dealt out, and which special moves you used in the 3D battles.

Overall this game was OK but seemed half-baked in a lot of places. It does allow for a large amount of freedom, although that does come with the downside that sometimes it can be hard to tell what you’re supposed to do, and the flags that enable you to do events or quests are sometimes obscure. The story is a little confusing and seems to assume that you already know the basics of the anime (which is common in these IP games).

Next up is Fangs of Alnam, a notoriously bug-ridden PC Engine game.